10 reasons why you should witness the raw classics at Origins

After a successful and sold out debut, Origins returns at the infamous Maaspoorthal. To give you an impression of why you can’t simply miss the Raw Classics event, we listed down 10 reasons for you about Darkness Evolved.

Origins was held for the first time last year, which was the very first event where Raw Classics are put in the spotlights. It was not only completely sold out, but especially the atmosphere in the crowd was excellent during The Darker Side of Classics. Going crazy like back in the old days and scream along before the heavy drops, we love it. Those who were there, can definitely confirm this statement!

To make the line-up even more extraordinary, Origins has framed the sets of certain DJ’s with unique showcases and live-acts. Like Crypsis for example, who will dedicate his entire set to his legendary Statement of Intent album and Noisecontrollers, who will resonate his rough stuff during Attack Again in the Maaspoorthal.

4,5 years after their last performance, Adaro, Alpha², E-Force and Ran-D now finally return with their heroic formation A² All Stars. Their debut at Hard Bass 2012 and their set at The After Party in the BLUE at Defqon.1 2013 where their only exploits so far, but Origins is about to change that. They will represent the famous A² Records tracks during their comeback. This means you finally get to hear that one record, which we haven’t heard live for so long: “You are the resistance!”

4. Festival times at an indoor location

The events from Shockerz Events have one big plus side. Although the indoor season is packed with night parties, Origins still maintains the regular festival times for their events. The doors of the Maaspoort will open at 14:00 in the afternoon and the very last kicks will be heard at 01:00 at night. This way you can get home within reasonable time and still get to spend your entire Sunday anyway you want!

Back in the days, when people where still fan of a label… Origins brings back that feeling and therefore the many labels of the darker side of hardstyle will be present on the 23rd of February. Numerous of sets are programmed to bring out the best of the music labels, like Theracords Allstars, The Magic Showcase and Chain Reaction & Kold Konexion present Minus is More. 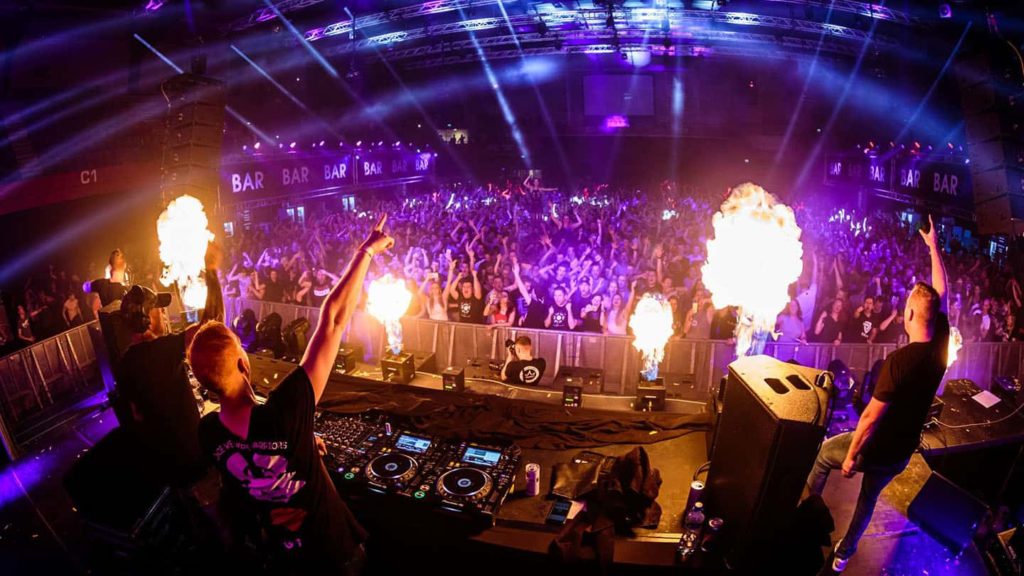 6. Only for the enthusiasts

During the previous edition, is was quite frankly that the atmosphere within the crowd was incredibly good. The good old tracks from years ago were still in the back of the heads of the visitors and it was noticeable that everyone on the dance floor was singing the entire lyrics of the music. This makes Origins an event for the enthusiasts: everywhere you look, you’ll see dedicated ravers like yourself enjoying the music which we all love.

7. Getting your drinks in no-time

One of the priorities of the organisation is to enjoy the music as much as possible. Huge lines in front of the bar doesn’t help with that of course, so that’s why there are extra bars available and more staff to help the visitors as quick as possible. This way you don’t have to wait for your beer too long, so you can get back on the dance floor in no-time. Cheers!

Also this time, the second Area is representing the harder stuff during Darkness Evolved. At the first edition, there were a lot of people that didn’t even leave Area 2 throughout the entire day; the line-up was just that good. With Chris One, Degos & Re-Done, Thera and many others on the roster, all artists are present to go absolutely wild.

Nothing is as annoying as that very moment when you are about to throw your dance moves on the drop and then someone bumps into you. You simply need enough space for dancing. Lucky enough, the organisation has told us that they’ve put a maximum amount of tickets for the entire venue, to ensure enough room for everyone to kick their feet towards the ceiling.

10. Big chance it will be sold out once again…

Like we’ve said, the very first Origins was completely sold out. With bouncing dance floors, loads of iconic tracks from the past and an insanely big atmosphere, the tickets for Darkness Evolved are going rapidly fast. So make sure to get your tickets in time before it’s too late!

Origins – Darkness Evolved will take place on the 23rd of February 2019 at the Maaspoorthal in ‘s-Hertogenbosch. For tickets and more info, please visit the official website of the event.

After a completely sold out debut, Origins of Raw now returns with a brand new edition. The line-up has just been revealed, where two area’s are filled…

Interview with The R3belz about his return on-stage

A while back you published a post on your Facebook page saying “about 4 years ago..” It’s a very long time, what happened back then? Well, nothing…

Back in time with Raw Classics at Origins 2018

It had been floating around for some time now, the will of people to go back to where the ‘raw’ scene began. To go back to the…