Theracords: where music and family become one

It’s Thursday, September 12th, 2013. I’m standing in front of the mirror, in the bathroom of a restaurant. All colour seems to have disappeared from my face and I can feel my hands faintly shaking. I splash my face with some water to get a bit of colour back. Of course I’m excited to talk to these two people. I already know Pieter, and I’ve had a bit of contact with Ingrid as well. But still, a real job interview with the owners of the Theracords label is making me more tense than I thought it would. I puff up my chest, open the door and walk towards the meeting room.

If at that moment I had known what the conversation I was going to have would end up meaning for me, I would have been even more nervous.

“Cosyness”
When you think of Theracords, you think of the slogan. ‘Music produced from the heart’ summarizes everything the label is about. The company was established in 2008 by Pieter Heijnen, aka Dj Thera himself, and his business partner Ingrid Janssen. At first the label was created as a hobby thing, says Pieter. ‘Later on we started professionalising the label, that’s how we always kept a bit of accessibility and solidarity in the company.’

Those two core values made it so that Theracords ended up having a very warm and cosy image. The audience noticed this and there soon was a big group of dedicated fans, who embraced both the music and the overall atmosphere of the label with open arms. At that moment, it feels like a close family is beginning to grow.

Meanwhile artists start to see the impact of the label, which makes them decide to be bold and send their demos to Pieter. Christian Jensen is one of these people, who ends up joining the label as Wavolizer. When asked about his time after he signed at the label, Christian says: ‘I got in touch real quick with the other Theracords related people. We had so many hilarious Skype and MSN conversations (back when that was still at thing). I loved those times!’ It was clear; Theracords separated itself by both her music and her “cosyness”, for fans and artists.

I walk into the meeting room. At the far end on the left I see a man and a woman sitting at a table, their backs facing me. Instantly I recognize the man through his posture and the sweater he’s wearing. I stroll towards the table. ‘Well, here I am,’ I hear myself say. The two turn around and stand up. Pieter has a wide smile and gives me a warm welcome, as if we’ve been friends for years, even though we’ve only met once before. Ingrid shakes my hand, properly but friendly. ‘Good to have you here!’ she says. ‘Have a seat, fancy a drink?’ The tension that was eating away at me a few second sago seems to flow out of my body. Ah well, they’re just two people like me, who happen to work at the company I would like to be a part off as well. ‘Yeah, thanks. I’d like a coffee please.’

Label me
The ‘later-on-we-started-professionalising’-idea suddenly turns into a fast-paced adventure. By today’s standards, Theracords has become one of the most popular raw hardstyle labels. The growth of this genre in general gave the label the boost it needed and deserved. Not only did the popularity of the current artists grow exponentially, but Theracords also acquired an enormous amount of new label fans during this blossoming period. These new people are of course fan of the current sound of the label, but are also susceptible for the cosy vibe of the label. They’re surprised by how small the border between fan and artist can be at the company. Pieter feels this is a normal thing: ‘We think it’s important to keep investing time in your fans. Through their support, we can keep doing what we do. And we appreciate that immensely.’

The artists of Theracords itself become a big and close group over time as well. That’s something that Wavolizer, who decided to take a different musical path in 2014 and therefore left the label, kind off misses. ‘The internal communication of the label was always top quality. You could get in touch with everyone easily, and people were always friendly and down to earth. In short: it felt like a family,’ says Christian.

My mouth has turned dry of all my talking. I take a sip of my, by now, lukewarm coffee, but it’s not really quenching my thirst. Still, words keep rolling off my tongue over and over again. Pieter nods a lot, and I even see Ingrid look at me fascinated every now and then. We’re going way overtime, so the interview gets cut off after a while. ‘Thanks for coming by, we’ll keep in touch,’ says Ingrid. I can’t really read from her facial expression if that’s a good thing or a bad thing. Pieter doesn’t say anything about it, but he does give me a wink before I turn around and walk away from the duo. So maybe I did nail it? 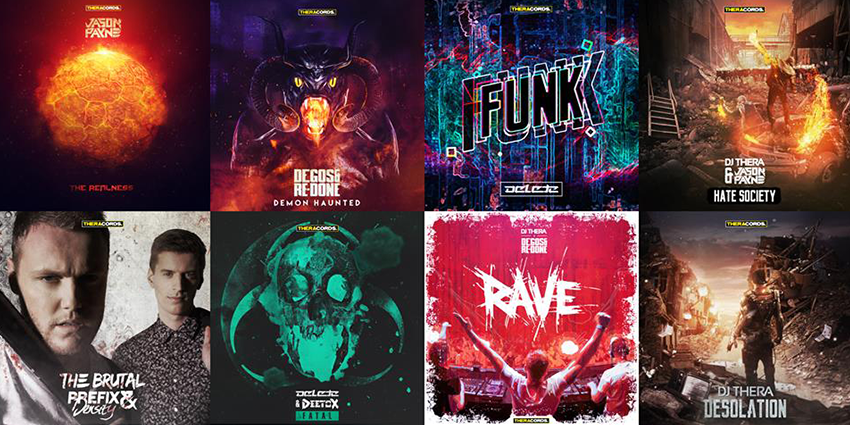 Happy together
Shortly after the job interview I joined the Theracords company internally. For two years I have experienced from up close what Theracords has gone through. Because of that experience, I wondered what Theracords exactly is for me. On one hand it’s an enterprise of course; a company that needs to make money, that sometimes needs to act like a business and make tough decisions.

But besides that, I also see something in Theracords that I have not seen in any other hardstyle company yet: I see a family, linked through music.

I see a CEO who goes crazy in the audience during performances of his own artists. A duo from the Achterhoek region, who tap and hand out rounds of beer to the visitors of their own event. An Australian who leaves everything behind and moves to the other side of the world, to be as close to his fans as possible. A female artist who fights like no other in an industry that’s dominated by men, and who gets all the praise she deserves for that. But I see more than that.

I see fans who travel across the country to visit every major event where these artists perform. A bunker at Q-Base, holding their breaths when a moment of silence is created for a deceased family member. I see tears, smiles and bassfaces. Hands going up in the air. Feet moving rhythmically. And suddenly, I see the true meaning of the slogan of the label.

It’s Tuesday, August 18th, 2015. I’m standing in front of the mirror, in the bathroom of another restaurant. All colour seems to have disappeared from my face and I can feel my hands faintly shaking. I splash my face with some water to get a bit of colour back. Of course I’m excited to talk to these two people one last time. I know Pieter like no one else, and Ingrid too is an open book for me. But still, a final farewell lunch with the owners of the Theracords label is making me more tense than I thought it would. My time as a Theracords employee is at an end unfortunately, but that doesn’t matter. I puff up my chest, open the door and walk towards the dining room. With every step, I feel my heart beat, and I feel the rhythm of it in my ears. This is what will link me to these people for eternity.

This is the true music, produced from the heart.

Bookings agency Limitless Agency has added (including a complete rebranding) a new artist to the roster. None other than heavy weight Thyron has signed with the agency,…

A special style with an equally special video clip: with his first feat on Theracords called ‘Drowning’, Criminal Mayhem immediately brings his power to the table. The…

Riot Shift is on fire: “We have never been so inspired”

The men of Riot Shift are working hard and they’re coming with much new music. This isn’t the only thing they’ve announced, since the duo has also…