Aftershock’s identity has been a secret for two years, but now that he’s signed to the Art of Creation label, this has come to an end. The masked DJ finally shows his true face at his new label: “At Art of Creation, everything seems to fall into place.”

READ: Sephyx established by Art of Creation: “We fit well together”

A packed GelreDome was introduced to a masked Aftershock during the last Hard Bass edition, as a surprise of the I AM HARDSTYLE team. And after two years, the switch to Art of Creation has now been completed. “To be part of this is very cool of course”, says Aftershock for the first time without a mask. “They are all guys who have more than earned their spurs in hardstyle and producers that I personally look up to.”

Aftershock finally reveals his true identity. From now on, it is no longer a public secret that Wesley Fanger hides behind this act: someone who has been part of the hardstyle scene for years and started under a different name. “When Aftershock was still a little Shockerz, I already joined Joram (Wildstylez) in the studio”, Wesley explains. “He taught me some things about making kicks. Fast-forward +/- 10 years: we ran into each other again during a booking in Croatia. The click was still there and then we decided to join forces into the studio. This led to the collaboration ‘Never Bring Us Down’, together with LXCPR. At the beginning of this year I got a call from Joram and he asked me if I wanted to join Art of Creation. I was honored and I took the chance!”

This ends the collaboration with I AM HARDSTYLE. “They really were the kick-start of Aftershock and I am very grateful to them for that. Without them I would not be where I was now. After more than 2 years, I feel it was time for the next step. Then the call came from Joram, exactly at the right time, and now we are here.” The click with his new label has been there for some time: his new colleagues regularly play the tracks of Aftershock and he has already released his first track on Art of Creation with the collab with Wildstylez. 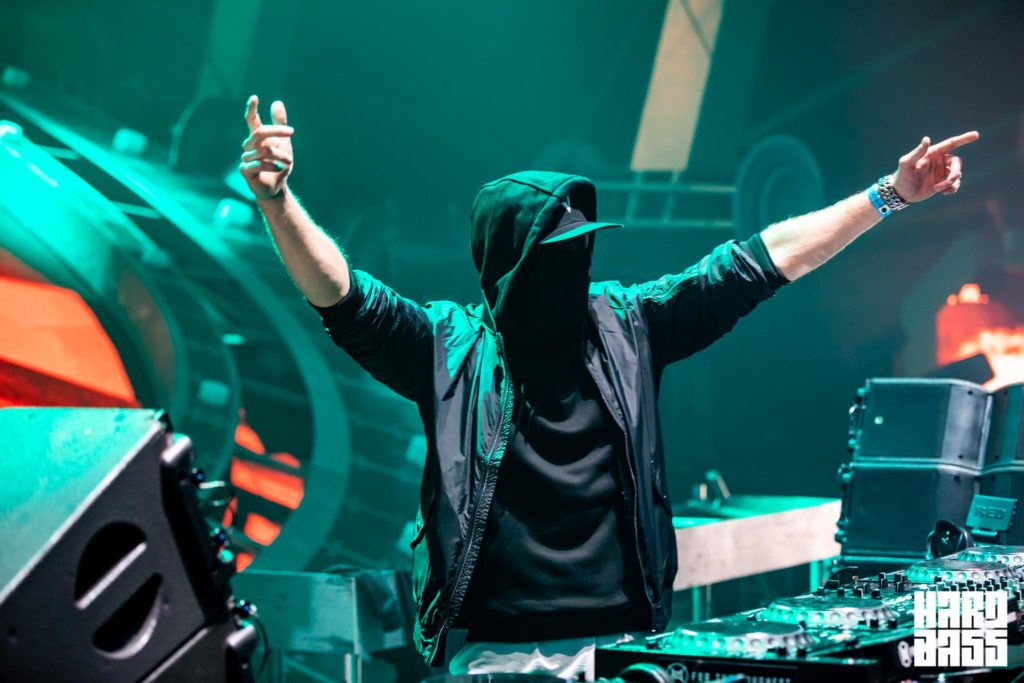 “With the announcement at Art of Creation, everything seems to be falling into place”

Fans have been guessing on the person behind Aftershock in recent years: many even thought Hardwell was behind this. How does it feel now that the mask is finally gone? “Good! We had an incredible number of meetings with the team to see if we could estimate when the time would be right to take the mask off. It had to feel good. Now with the announcement at Art of Creation, everything seems in place. I literally see it as a new chapter. So far, the response to my reveal and the announcement at Art of Creation has been hugely positive.”

The beginning was impressive: not only the debut for 27.000 people (one of the biggest in the harder styles of the past years), but also the ‘Survivor’ bootleg from Aftershock was in the endshow of Intents. “I couldn’t have wished it better in terms of the start”, he looks back. “It all went so fast! At the moment I am working on a number of collaborations that I did not expect to be able to do now (let alone ever). Unfortunately, I cannot reveal which names these are yet. Because of corona I could choose to relax and relax more, but that’s not how I am.” In these quiet times, he chooses to just keep on going in the studio and release music at Art of Creation.

The first release of Aftershock (as an Art of Creation artist) is already in the pipeline: ‘Inner Universe’ will be released on April 29th. “The first lyric in the track couldn’t be more appropriate I think: ‘We embark on a new journey!’ I wrote the lyrics of this record together with my manager. In general, I always build my tracks first and then the theme follows (including lyrics) often by itself. I got a bit stuck at the time, so we decided to turn the creative process around. In this case we first wrote the lyrics together and then I built the track around it. So a tip for all would-be producers: are you stuck with a track or are you struggling to figure it out? Then try to completely change your way of working!”

Aftershock has big plans musically. “Although last year has of course been a lot quieter in terms of events, I still feel like I had a fairly busy year with the birth of my son, and everything that comes with it. I’ve been in the studio almost every day: from early till late. It sounds cliché, but producing is really my passion. Furthermore, we are currently making plans with the team for the rest of the year. For the time being the focus is on the music and I try to get the most out of my studio time. With a bit of good hope we can then enjoy some events again in a few months and make more concrete plans.”

In conclusion, Aftershock looks back on a great transfer. “Thanks again for all the positive reactions. It is very nice to see how active the hardstyle scene is, despite the fact that there have been no real events for a long time. Unfortunately I think we have to be patient, but I can’t waiting for the moment we can all go out together and see each other again.”

‘Aftershock – Inner Universe’ will be released on the channels of Art of Creation on Thursday April 29. Pre-save the track here to be the very first to listen to it.