Most fans will agree: everybody remembers his or hers first party. Stef Rievers had this as well, because he went to Defqon.1 on his own 6 years ago for his first experience in the harder styles. It ignited the spark, which made him to be working full time at festivals as a cameraman, but unfortunately now has to sit at home because corona came around the corner. “I feel lost, when you consider that you could have been at The Gathering among all those people this weekend. That’s why this tribute ‘Lost in Paradise’ is for everyone who feels the same as me and many others.”

READ: Q-dance talks exclusively about Defqon.1 at Home and the coronavirus impact

Stef had already seen many endshows of Defqon.1 and this caused the urge to go to the biggest harder styles festival in the world. “Just one day after my birthday in 2014, I decided to embrace the full weekend alone: I just loved hardstyle and my friends were too young”, he says. “At first, a friend of mine would go with me, but he was still 17 years old – so in the end he never took the risk a few days in advance. I thought: I am all set for this weekend and I will not let this take it from me. I have to and will go here.”

“From filming 70 hours in 1 week at a festival, to 0 without any events”

The cameraman – who usually films for the aftermovies of various events, recaps for artists and who also worked on the livestreams of REBiRTH and Intents Festival with Squere during corona – met a lot of people over there, who are still his friends. “To this very day, I still have contact with a number of people from that weekend. Some almost every day, others less.” A typical festival thing, that everyone who goes to parties will have to deal with. But now unfortunately we live in different circumstances …

Let’s outline the situation that the coronavirus has caused. Because what did the (working) life of this cameraman look like before corona? “Thinking back, it is actually bizarre what I was doing. It seems so unreal now and then to think about it. An event almost every weekend, sometimes several. During the week, go to the gym, watch all the footage and make plans for other videos, while the next weekend is almost knocking on the door and then to experience another hard production. Weeks from 70 to 90 hours in the festival season.”

“During my first Defqon, I was accompanied by all strangers, who I considered friends within minutes”

Now that the festival season has been cancelled by COVID-19, Stef is mainly at home. “I’ve received a small settlement by the government for three months. But I have now decided not to extend this, but just to find a job next to it. Keeping myself busy. I have some nice projects running, but not nearly enough to work full-time. It has certainly given me a different perspective on a number of things, but it has above all made me realize that I really live for this industry.”

“On the Saturday, during the final show, I sat on top of the shoulders during ‘Lost in Paradise’ – with a very nice ending the torches went around the field. I, sitting on the shoulders, did not know what happened to me. I was completely in the moment. Every moment that I have a hard time, have a stupid day or just sit in my own bubble, I go back to the moment when I am back on my shoulders: looking at 60,000 people who have exactly the same passion.”

“Now, 6 years later I want to make a tribute. A love letter, an ode to the music, the artists, festival organizations and especially the audience. In which I dare to call each person my family.” Because Stef has the feeling that something is missing in his life. “I feel lost, knowing that this year I will not be rocking hard on my birthday on Friday during my birthday, where I can really hit the hard beats, sing along to the most beautiful melodies or walk around the campsite in the evening – to walk into the toilets where a huge afterparty is going on.” 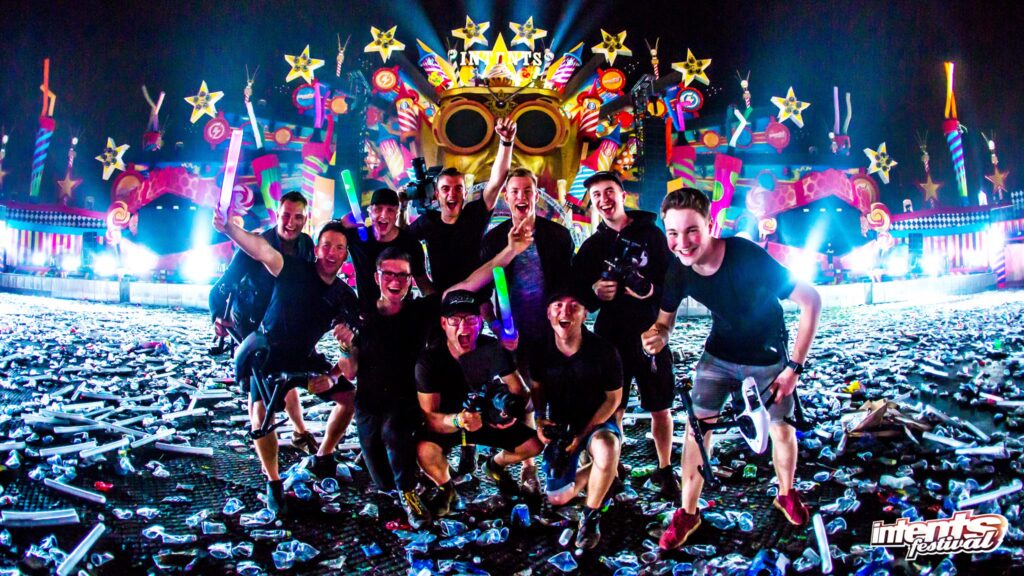 After the trailer went online last week, he posted the final result of his tribute today. With a lot of footage that look back on the festivals we love so much. “This was such a fun process, I remembered some shots from some projects by heart”, explains Stef. “The girl that is smiling, while you see confetti everywhere at Mysteryland last year, that is for me that real festival feeling. Going with the sun on your face, hard beats and enjoyment. But also the final show of Defqon.1, Intents, Mysteryland… Looking back on all this was an experience. I already had many shots in the back of my mind, but during my discovery I discovered so many more beautiful moments that eventually came together in this video.”

Since the release of the trailer, Stef has been inundated with reactions from friends and fans. “I think it is so special what the video does to everyone. Comments that people have tears in their eyes while watching, get goosebumps all the time. I watched this all day long with the biggest smile on my face. developed, and now a few days later. It really does me good, it just gives me goosebumps when I think about it. It couldn’t have turned out nicer.” Say for yourself: does the video down below not make you wipe a tear?

A tribute to all festivals: “Lost in Paradise”

Now that the production of ‘Lost in Paradise’ is over, and the corona virus has largely cleared his agenda, Stef looks further. “I will have some nice projects in the near future, I am working on a video clip that is coming soon. I have a wedding planned and I am also applying for a job at least to make a few hours. Perhaps this video brings some new challenges to my path – we’ll see what the future holds.”

‘Lost in Paradise’ is available online today – the day of Stef’s birthday and The Gathering – on the channels of Rieverze.