Hardstyle Pianist & Helix are working hard as Symphonicz: “Don’t let anyone stop you”

A year after the launch of Symphonicz, Hardstyle Pianist and Helix are about to take the next step. The gentlemen had great plans for last summer, but they were able to give this a positive twist by spending more time in the studio. With a lot of new music as a result: “All those cancellations give us the opportunity to develop, but we miss the parties enormously.”

READ: Reverze aims full of expectation for September 2021: “Wake of the Warrior”

The Symphonicz act is quite a unique combination. The pianist and the producer have teamed up to bring the classical sound and the hardstyle sound together. “Paul has been producing under different names such as The Generator and Helix for quite some time, and Jisk obtained his master of classical music at the conservatory. Then he started as the Hardstyle Pianist: his career developed very quickly. As a duo we make hardstyle with (musical) message.”

The well-known Hardstyle Pianist videos went all over the world and so Paul came by for a piano lesson with Jisk. “There was an immediate personal and musical click”, the men say. “After that we kept in touch and when Jisk sent a melody to Paul, the first joint track ‘Liberty’ was released.” It left the two musicians wanting for more and so they set to work together.

Because also on stage it is a bit different than usual: Symphonicz not only plays live, but the piano is also played live and sometimes even with an additional vocalist. “Paul mixes the records and Jisk plays piano in the breaks and possibly other sounds, such as pads and leads. In some cases, Jisk also has his specially white grand piano with smoke, light and lasers built in. All of this makes Symphonicz a cool live act. We build the party together.” 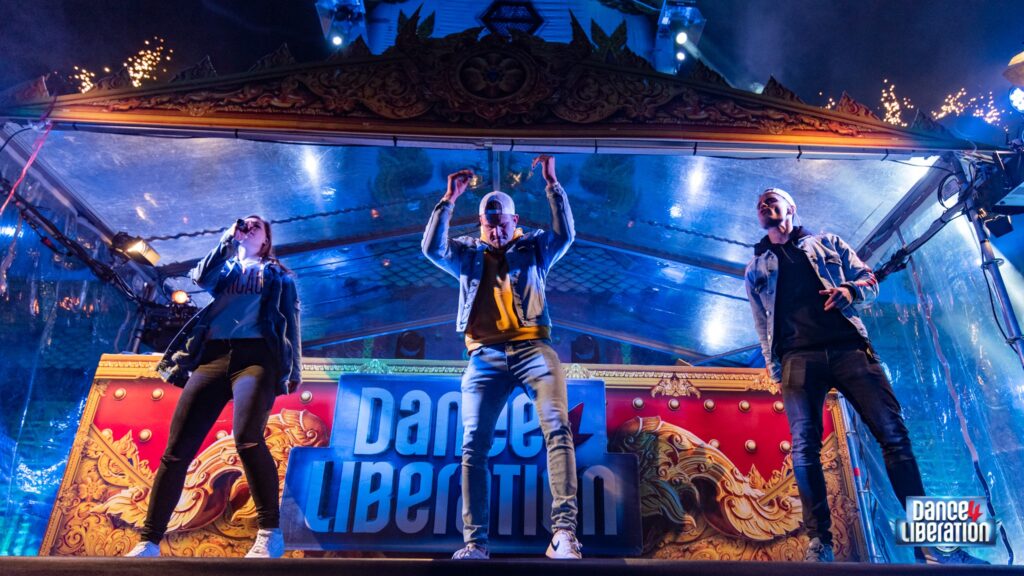 Classical influences as a common thread

In recent years, more and more emphasis has been placed on the piano within the harder styles. How come classic and hardstyle go together so well? “Jisk mixed his classical style with hardstyle when he started his Hardstyle Pianist channel a few years ago. After that, he gave a lot of shows in which he played hardstyle on the piano with orchestra. In pop stages and at the big festivals like Defqon.1 and other DJs have seen that too.”

“Jisk’s piano playing and musical arrangements with classical influences give the original tracks a personal touch. Many producers sometimes look for that same feeling in their records and find that learning to play the piano can bring a different perspective on producing. This is also the reason that Jisk now gives piano lessons to many famous DJs.” For example, Headhunterz is taught by the Hardstyle Pianist. “On a real instrument you can make timing and dynamic differences, so that there is even more feeling in a melody. That is good for a track in many cases. Apart from that, it is a big plus that when you play an instrument, you create melodies faster as a producer.”

The first Symphonicz records are already being streamed, of which ‘Liberty’ is already heading towards the million. These tracks were also added to the podcasts and playlists of Headhunterz, Coone, Brennan Heart, Isaac and many others. It should have been a beautiful summer, but COVID-19 made this something different. “We already had a few great shows, also abroad, so the corona has (also for us) unfortunately caused many cancellations. So this is a period of personal and musical development for us.”

The men therefore put their shoulders to the wheel and continue to work on themselves. “As a hardstyle act we as Symphonicz can still learn a thing or two. We use this time to find our own style and make as much great music as possible. Hopefully we can perform again soon to let our music be heard by the people. And to have parties together again, because we really miss it!”

“In life you don’t let anything or anyone stop you and if you believe in something, you go for it 100%!”

In addition to many piano covers and of course working their asses of in the studio, a new Symphonicz record has been released this week: ‘Champion’. Released on Lose Control Music and intended for the biggest stages. “There is a lot of feeling in this track”, the duo explains. “That’s also because a number of parts in the track come together very coolly: piano of course, a fat melody that goes up in the second drop, a piece of rap that we wrote ourselves and a beautiful top line by singer Elyn. A real story being told.”

With ‘Champion’, the gentlemen want to take the next step in their career: with the goal to do more festivals, when a normal season can be held again. “Symphonicz is of course a relatively new act, so we don’t expect to end up on the biggest stages right away, but of course we have already performed on larger stages together and separately. We do look carefully at where our music does its best. Of course, we have a few on our list where we would like to play extra, such as Defqon.1, Decibel outdoor and all other great big parties.”

The ultimate goal of the act? “Let people enjoy euphoric hardstyle and draw them into a story. We want to stand out with our qualities and grow into a full-fledged act that can be found at the major festivals around the world and whose tracks can be sung by anyone who loves hardstyle!”

‘Champion’ by Symphonicz can now be listened to via the well-known streaming platforms. Keep an eye on the duo’s socials for more information on the upcoming releases.

Sephyx signed by Art of Creation: “We are a good match”

It has been in the works for a while, but Sephyx has now been officially announced as the new addition of Art of Creation. This makes Xander…

Normally, hardstyle legends like Wildstylez and Brennan Heart would now be recovering from a very busy summer. But unfortunately this festival season, no dozens of bookings all…