How Adjuzt gained a big hype within a year

His first release of this year is now a fact with ‘LOVESICK’, but according to many fans, 2023 will be the year of Maikel – better known as Adjuzt. In fact, this makes him the most promising act this year, so we caught up with the Savage Squad member for a good chat about his career so far and the great things to come.

Adjuzt is a down-to-earth guy from the north of The Netherlands. He worked at the DHL not so long ago, while his career as an artist exploded. In the meantime he spent time in the studio with Rebelion, Warface The Purge and many others, and REBELLiON and Shockerz had to close the areas during his sets (with Element and with the Savage Squad Special) because it was too crowded. You can’t ignore Adjuzt these days, even though he hasn’t been around that long.

‘According to many, you should really keep an eye on Adjuzt this year’

“Bizarre”, Adjuzt looks back on the past few months. “I think it’s incredible, because at the time I simply worked five days a week and because of this I actually didn’t realise very well how many people were really talking about me.” Since his set at Intents Festival last year with The Purge, everyone is unanimous: the Adjuzt hype is real. He’s even debuting on that gigantic mainstage this summer (alongside Aversion and Mutilator) – something no one even thought about a year ago. “During my job at DHL we never discussed what I did in the weekends and what my ambitions were, there was simply no time for that at DHL either haha.”

Adjuzt is someone who fell in love with Hardstyle as an enthusiast and then produced this music himself. ‘ECHOES’, the ‘Bass Criminal’ remix and so on: they are all appreciated by an increasing audience. According to Adjuzt, it is well received because his sound represents ‘sensitive escalation’. “It could never be loud enough for me as a young visitor in the audience, but I also really appreciated a track with a great melody. I did my best for years to master my own sound, I actually succeeded in full during the ‘Bass Criminal’ remix. This combination is especially evident in ‘ECHOES’ and I am extremely happy and grateful that my vision is being well received by the general public.”

“My sound actually contains a bit of everything, a kind of Adjuzt cocktail. A melody keeps your track memorable in my opinion, and then to go out of your record during a nasty kick is of course very cool in terms of live experience.” 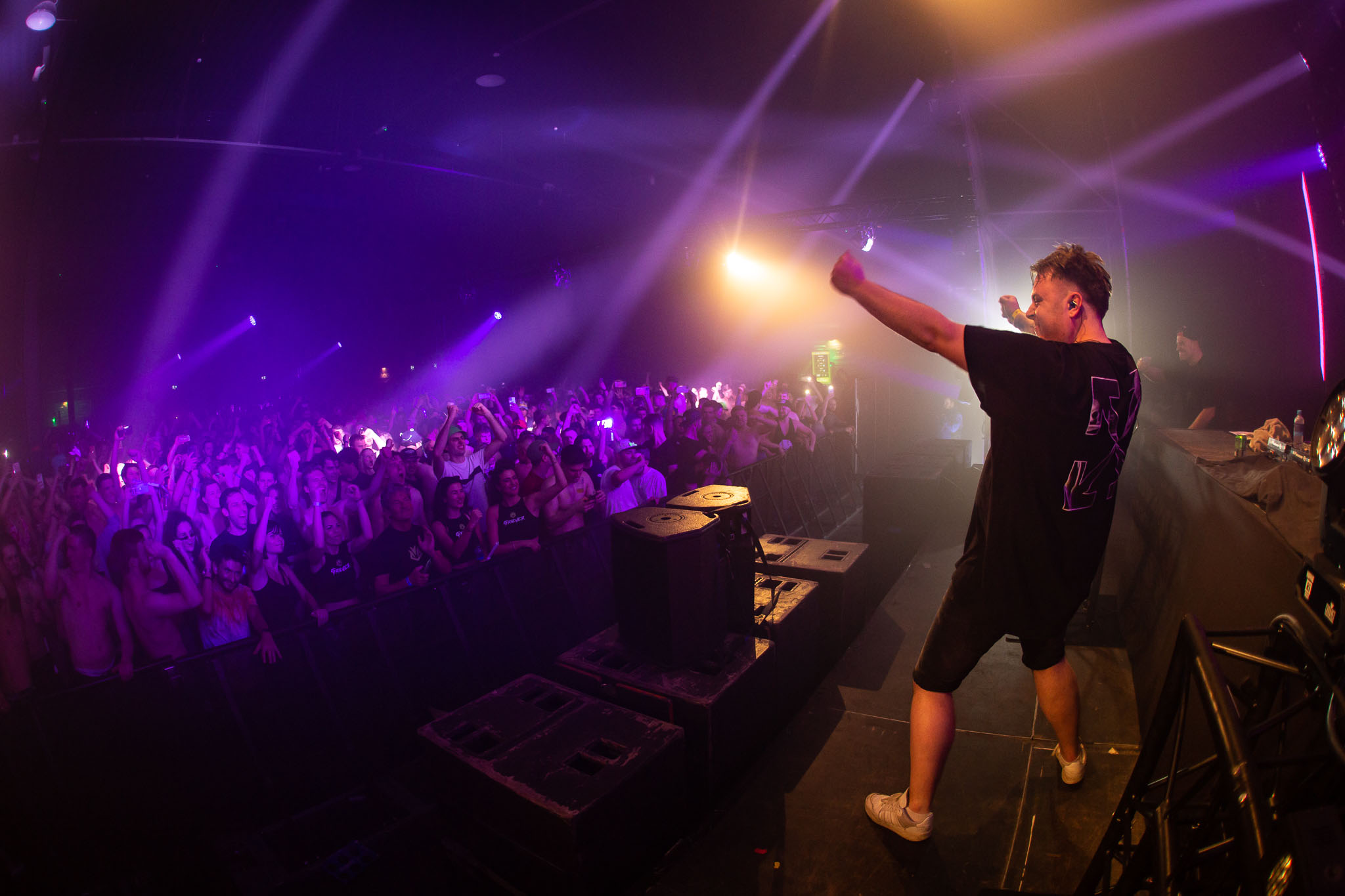 Adjuzt has taken the festival landscape by storm

He’s on a roll, because have a look a random line-up and Adjuzt’s name is on there. “I simply can’t deny it any longer,” he realises. The people who know him personally know that this has taken a while. “But now that I’ve been able to storm stages several times, the greatest artists and examples play my music. After half a year of relevance, ‘ECHOES’ has already finished in the Q-dance Top 100 at number 39 and I’ve been nominated as Best Talent, Best Set and with my label Savage Squad as Best Label at the Hardstyle Awards. It’s hard to say I don’t see what’s happening right now.”

Adjuzt lights up when discusses these achievements in recent months. He’s still a fan himself and it does things to him. “I always had a little ‘klaplong’ front row, but I will be able to do this less and less often because people want to take a picture with me more often. Then I realise all too well that my life has changed considerably in the past year. I’ll never say no to a photo either, so tap me when you see me!” 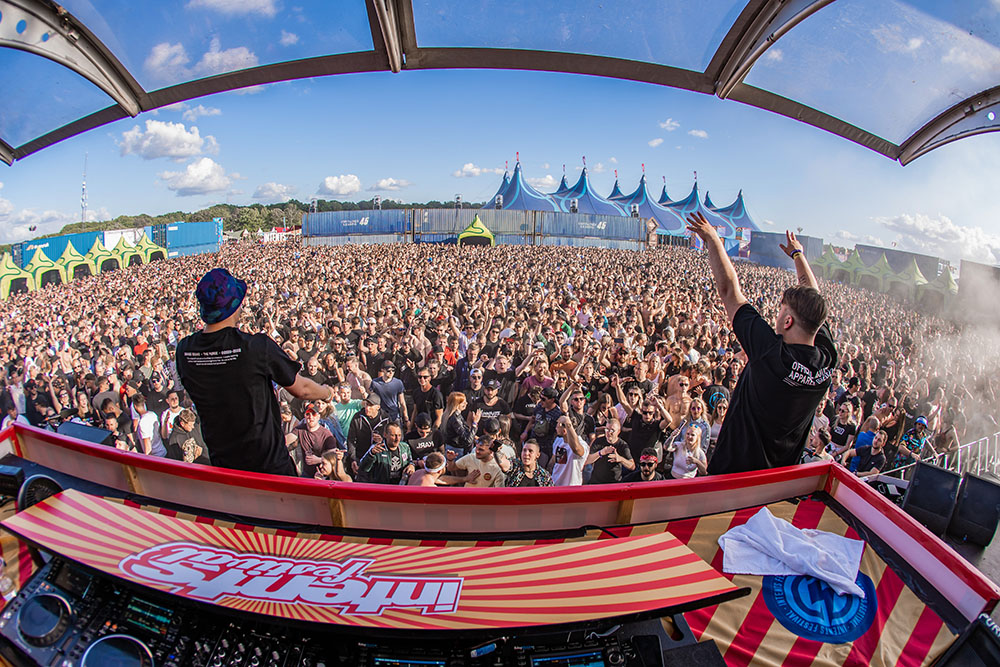 Interview with Adjuzt: “Intents, you can already cancel the demolition service for Sunday!”

The Intents mainstage is not for everyone, but Adjuzt is there within 1 year after the hype started. “I think it’s incredible that I’m being given such a place, and that also with two of the greatest talents that I respect very much. Big shoutout to Mutilator and Aversion, they also deserve this (maybe even more than me). I can assure everyone that the three of us are going to create something really big. Who knows, maybe that collab will come out especially for Intents.”

This year, Adjuzt is going all out with his new live act: NXTGEN. This puts him on REBiRTH and WiSH Outdoor – with many more performances to come. It is an act with which Adjuzt literally covers every track from his entire discography, he explains. “I’m quite a mess when it comes to producing. I’m always very critical of myself, so I always have a lot of different versions for each track with completely different drops and climaxes than how they sound on release (sorry not sorry Savage Squad).”

It gives him even more creative freedom. “For my NXTGEN live act, you can mainly hear my records in a completely new vibe that fits well with the live Adjuzt experience. So I have been creating unique edits for this live-act for several months now, of which the first one will be at REBiRTH Festival. The jitters are certainly there, I have already played a number of NXTGEN live edits, such as the ‘Take Me Away’ and ‘Chicken Soup NXTGEN edit’. This was a taste of what the people can expect, and maybe you can also hear it during Adjuzt LIVE at X-Qlusive Rebelion next week, who knows…”

We can expect a lot from the big man in 2023. “I have always been one of the audience myself, and this will never go out of my mind. So I will always give the utmost, because I always did this with my friends in the front row. Who know you will also see me at sets of my favorite artists and label mates, because I always want to keep doing this I want to thank everyone for their support over the past period. I can assure you that I will not disappoint you. I can’t wait for the festival summer to make countless new memories with you!”

Today, Adjuzt kicks things off for 2023 with ‘LOVESICK’ and you can listen to it via the official channels of Savage Squad Recordings. Also, many ‘beautiful and big’ things will be announced later: so keep a close eye on Adjuzt via Instagram.

We Are Hardstyle kicks off 2023 with special RAW battles

We Are Hardstyle is back and has brought in the largest line-up in the history of the event. 20 of the hardest artists compete in exclusive battles,…

D-Sturb and Vertile team up for a unique new live act. Best of Both will perform exclusively during Shockerz and just a few festivals in 2023, where…

Neroz is the latest addition to the Scantraxx BLACK label. The Raw Hardstyle DJ – responsible for hits like ‘Pinsir’ and ‘Bodyshock’ – joins the well-known main…