Phuture Noize hints at new future plans: “No one has ever done that before in hardstyle”

After the release of not less than 3 albums in 2,5 years, Marco Spronk – better known as Phuture Noize – has now announced he slows a bit down concerning releasing new music. But in a personal message, the hardstyle DJ tells his fans he’s not sitting still at all.

Via his official Facebook fanpage he gave his fans a small update: “I’ve been having tons of brainstorm sessions and doing a lot of work in the background. I’m planning out the future very carefully to make sure my vision will be clear with great quality. There is a lot of inspirational shit happening and I’m working on getting the right (big) parties involved to make my future as unique and cool as possible.” He closes his message with a striking statement: “I know this sounds vague, but all I can say is it’s gonna be something no one has ever done before in hardstyle.”

Of course the speculations about this Facebook post have been exploding meanwhile. In the comments his fans are talking about “an own Phuture Noize event” and that they “can’t wait for what he’ll bring.” On his last album by the way, he had tracks like ‘The beginning of something new’ and ‘I wasted all of my time’. Who knows, he might have already made a link to his upcoming plans for the future…

Before the release of his Black Mirror Society (Deluxe edition), Phuture Noize brought out four other albums. Besides his studio work, of course he has also achieved quite a few highlights on stage. He was responsible for a part of the Defqon.1 2019 anthem and played a Spotlight set during The Gathering this year. Furthermore, he’s a well-known name on the line-up of events like Decibel outdoor, Qlimax, Intents Festival and QAPITAL.

Phuture Noize: ‘The beginning of something new’

After Phuture Noize indicated earlier this year he wants to begin something new after his Black Mirror Society (Deluxe edition), the wait seems almost over now. Via Facebook he let his fans know that what he’s working on is “in process and will unfold very soon.” For now it’s not clear what this is, but if we may believe what Marco wrote it is something never happened before in the scene. Keep your eyes on Phuture Noize’s Facebook fanpage to stay up to date. 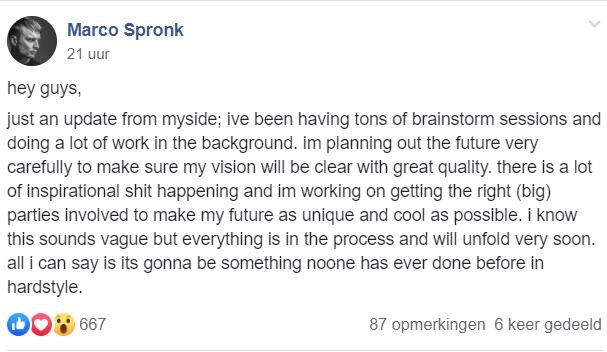 The collaboration between Phuture Noize and Sefa was a surprise for many, when the two DJs announced their mutual track back in September. Since then, lots of…

REBiRTH Festival has just announced that none other than Phuture Noize will make his long-awaited return behind the turntables during the kick-off of the festival season. With…

“Released from his burden, ready to let go of what is not necessary. His time has come.” Q-dance has just announced none other than Phuture Noize will receive…