Play online against your hardstyle heroes!

It’s no secret that a lot of hardstyle DJ’s like to play some FIFA or Call of Duty from time to time. It helps them to relax and blow off some steam after another busy day in the studio, or after another 24-hour trip home.

The guys from Frequencerz also like to get behind their consoles and because of that they decided to contact Ubisoft, the company behind the ‘Rainbow Six’ series, to collaborate. They thought it would be cool to set-up a team of hardstyle artists to play against fans online.

Play against your hardstyle heroes
Ubisoft gladly accepted their proposal and quickly after Crypsis, B-Front, Digital Punk and Zany joined their team. And so it happened that all six of them were invited to come over to the Ubisoft studio on Monday (December 14) to play some games. The latest edition of Rainbow Six, called ‘Siege’ has just been released. Ubisoft thought it would be a good idea to test the game with six extremely well-trained hardstyle artists. For those of you who are not familiar with Rainbow Six, the games revolve around tactical action. The player gets forced to work together with his squad, that he commands, in order to win the game. Tactics are involved. 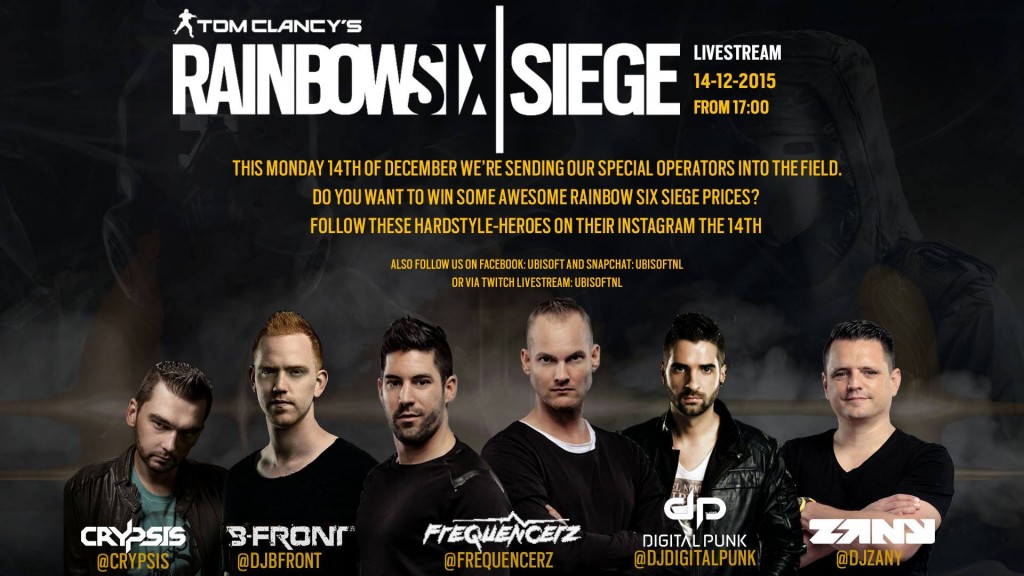 Check out the livestream
You don’t have the game? No problem, because Ubisoft will broadcast the entire event live on Twitch! The broadcast, which includes Crypsis, B-Front, Frequencerz, Digital Punk and Zany, will start tomorrow evening (December 14) at 17:00 CET. Do you think you have what it takes?

Besides that you can also win some great prizes during the livestream. All you need to do is follow the artists on Instagram and keep an eye out on their channels during the stream. Check out the official ‘Rainbow Six – Siege’ trailer below.

This is the Defqon.1 at Home line-up

With less than 10 days to go, fans of the harder styles are getting ready for the digital spectacle of Defqon.1 at Home. Take a seat, because…

Celebrate Dutch Kingsday with the Supersized livestream: “We’ll bring the party to your homes!”

Supersized Kingsday has been known for being the biggest event on the Dutch national holiday Kingsday for years now, and also for this edition B2S is having…