Rebelion and Sound Rush are coming with a collab

Attentive fans could just read some interesting comments under Sound Rush’s recent Instagram post. Rebelion replied to the question in the caption and by the looks of it the hardstyle world can prepare for an unusual collaboration between these two duos.

Sound Rush posted the question “Which track should we play next month at Qlimax?” aside a photo of a previous Qlimax edition. Rebelion commented: “Rebelion x Sound Rush”, whereupon Sound Rush answered just with two ‘flirting’ Emojis. The assumption of a collab of the hardstyle DJs got supported by some content in Rebelion’s Instagram Story. They posted their track ‘Empire’ with the announcement that another euphoric banger is coming soon.

In the first moment this combination might appear like a crazy mix, but looking at their career progression it’s much more imaginable. That Rebelion is overall getting softer and more melodic is noticeable since a long time. After their rough first album Uprising, their second album Empire moved far more in the middle of the hardstyle range. They played at huge stages like Hard Bass and their collab with Sub Sonik ‘Bring It On’ is getting played by many artists and for big audiences. And recently it got published they team up with Devin Wild for the first EPIQ New Year’s Eve anthem.

Sound Rush is famous for a very euphoric sound. Early tracks like ‘Open Your Eyes’ as well as new tracks like ‘Army of Fire’ consist mainly of melodies and soft vocals. But in comparison to some years ago, their sets tend to become a little bit harder, which is also recognizable in more euphoric hardstyle artists sets. Parts with harder kicks are now no rarity anymore, so a collab between these two hardstyle acts is something that might happen or had been happening already.

Counting 1 and 1 together, fans can definitely keep their ears and eyes open about this extraordinary combination. Visitors of this year’s Qlimax should pay attention about the new track during Sound Rush’s set. Check Rebelion’s and Sound Rush’s socials to stay up to date. 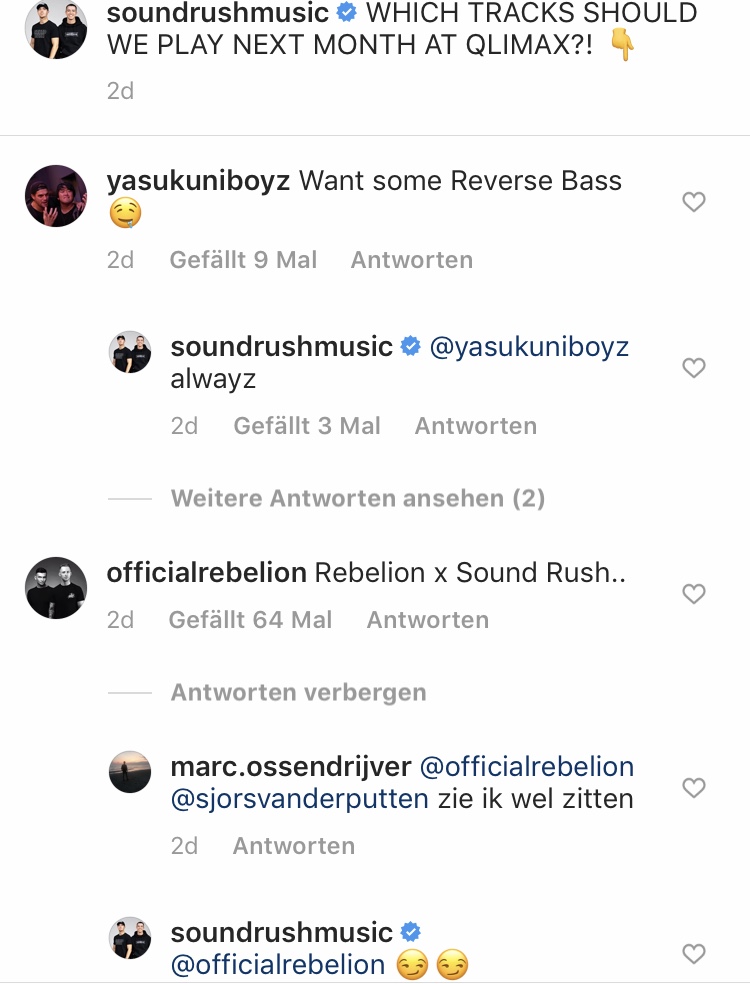 Rebelion: “Our new album A.I. (Artificial Intoxication) is specially made for the dancefloor”

The guys from Rebelion are about to release their brand new album: A.I. (Artificial Intoxication). Just in time for the festival season, where they will take over…

Rebelion has finally revealed the big news with the announcement of the new label Acid Reign. In collaboration with Dirty Workz, the brand new label bosses are…

Rebelion’s Overdose comes with its own event for new album: ‘The First Dose’

The word is finally out there: after months of teasing, Rebelion is finally going to release the Overdose album. In fact, the release will even be celebrated…