These artists will play new music during Qlimax – Symphony of Shadows

On 23rd November, the GelreDome will be taken over for a new edition of Qlimax. Now that all important information – like the line-up and the anthem of Symphony of Shadows – have been announced, visitors can get ready for the biggest indoor spectacle within the harder styles.

For this unique event, many artists spend quite a few hours in the studio and will present the results for the very first time during Qlimax. We’ve put together exciting projects, which you can expect to experience on the weekend.

READ ALSO: This is the Qlimax 2019 line-up – Symphony of Shadows

Sound Rush: “Ready for the first raw track from us?”

After the DJ duo Sound Rush hinted at a collab together with Rebelion, they announced via their socials that their first raw hardstyle track is in the making. This 155 BPM production will be heard for the first time in the GelreDome on 23rd November: “Ready for the first raw track from us? Will premiere at Qlimax.”

It seems the men from Sound Rush are well prepared for the upcoming edition of Qlimax. Besides their first raw track, they also produced a follow-up of their track ‘Breakaway’. They created this track together with Michael Jo especially for Qlimax 2018 and for the new edition, Sound Rush will make a new version of it.

Ran-D X MC Villain: “We gonna play it at Qlimax for the first time”

Via their socials, Ran-D and MC Villain announced they went in the studio together to work on a joined track: “New music incoming. We gonna play it at Qlimax for the first time!” This number will also be found on Ran-D’s upcoming album We Rule The Night. Considering Ran-D is busy working on this album, there’s a good chance he’ll play some other unreleased tracks during his Qlimax set.

READ ALSO: This is the Qlimax anthem ‘Symphony of Shadows’ by B-Front

This year’s anthem maker wasn’t sitting still in the past time: besides his ‘Symphony of Shadows’ production, he recently worked together with no one less than Psyko Punkz on a joined track. After B-Front remixed Psyko Punkz’ track ‘Back Again’ together with Frequencerz, the men now went together in the studio for a collab. Since it’s nearly time for Qlimax, there’s a good chance as well that B-Front will let visitors hear the track at the event.

D-Sturb in the studio with Sound Rush

On Sound Rush’s Facebook page they recently posted a photo, showing them and D-Sturb together in the studio. Both acts are on Qlimax’s line-up , therefor visitors can hope to hear the track blasting through GelreDome’s speakers. D-Sturb already worked together with the duo and Sound Rush played the result during their set at Defqon.1, but it isn’t released yet. 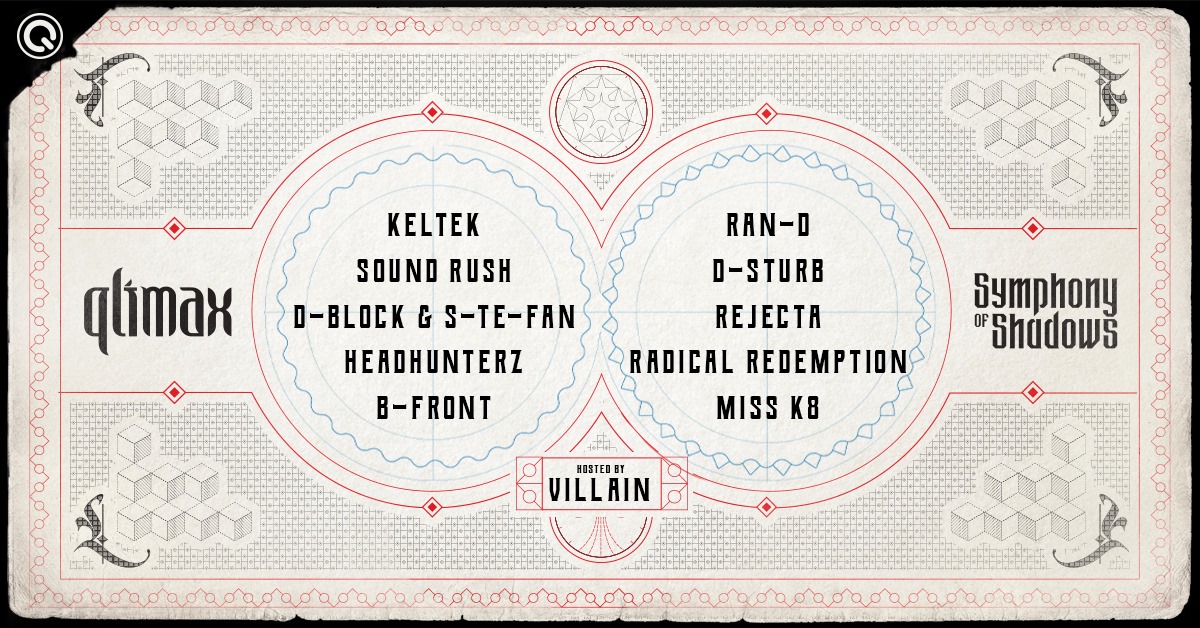 Last month, Rejecta came with the announcement of his very first anthem. For the new edition of Shockerz – Chaos Complete, the raw hardstyle DJ had the honor to create the anthem. Considering it’s one of Rejecta’s last performances before Shockerz, it’s possible that the Qlimax visitors will be the first ones to hear the track. “Currently working on my first anthem! Who’s curious?”

“Who’s ready for new Radical tunes? They are coming!”

Radical Redemption stands on Qlimax’ stage for the very first time. Via his socials The Radical announced he’s working on several new tracks: “Who’s ready for new Radical tunes? They are coming!” His fans let him know in the comment section they can’t wait to hear them at Qlimax. “Qlimax soon” and “on Qlimax, please!” were some of many reactions.

Miss K8 with a solo track and a remix

Traditionally, a hardcore DJ closes down Qlimax. At this year’s Symphony of Shadows edition, no one less than Miss K8 will play the very last set of the night. The Goddess of Hardcore has just released her brand new Elevate EP today, consisting of a solo track and a remix of her ‘Battlefield’ by The Satan. Chances are high she’ll include the EP in her set on Saturday.

No less than 5 Qlimax debutants

During Qlimax – Symphony of Shadows, literally 5 artists make their very first appearance on stage of the biggest indoor spectacle within the harder styles. With KELTEK, D-Sturb, Rejecta, Radical Redemption and Miss K8, 5 of 10 playing DJs will celebrate their Qlimax debut. Because a Qlimax performance is a true highlight for many artists, visitors can assume that the DJs want to present themselves in the best light, hopefully with some new surprising tracks.

Qlimax – Symphony of Shadows will take place in the GelreDome on 23rd November 2019 from 21:00 until 07:00. The event is completely sold out, but you can check Q-dance’s website for more information.

The Qontinent goes all out for ‘Breaking Boundaries’

The Qontinent is counting down full of enthusiasm: only 1 week to go until Belgium’s largest harder styles festival can finally open its gates again for tens…