Why you don’t want to miss the season’s kick-off: REBiRTH Festival 2020 – Island of Infinity

It’s finally getting closer now: the official kick-off of our beloved festival season! During REBiRTH Festival 2020 – Island of Infinity you will have the time of your life: it’s definitely no surprise tickets have already sold out for 74%! We’ve listed all the ins and outs, which will make sure you understand why you absolutely cannot miss this.

ALSO READ: REBiRTH Festival: “That feeling of ‘we can go again’ creates an amazing atmosphere every year”

1. REBiRTH Festival: the ultimate start of your festival season

On the 10th, 11th and 12th of April the Raamse Akkers in Haaren will be completely transformed into an Island of Infinity, on which you’ll wonder in the world of REBiRTH Festival for three full days. The festival grounds have been expanding every year so far, so this edition of the hardest island promises grand things as well.

Earlier we already talked to the organisation about this growth of REBiRTH Festival: “REBiRTH is unique because it’s truly the first festival of the season, with a big outdoor stage ever since 2017. The excitement and the drive with both the visitors and the artists create that feeling of ‘we can go again’ and provides an amazing atmosphere every single year. This is how REBiRTH is unique from any other festival.” 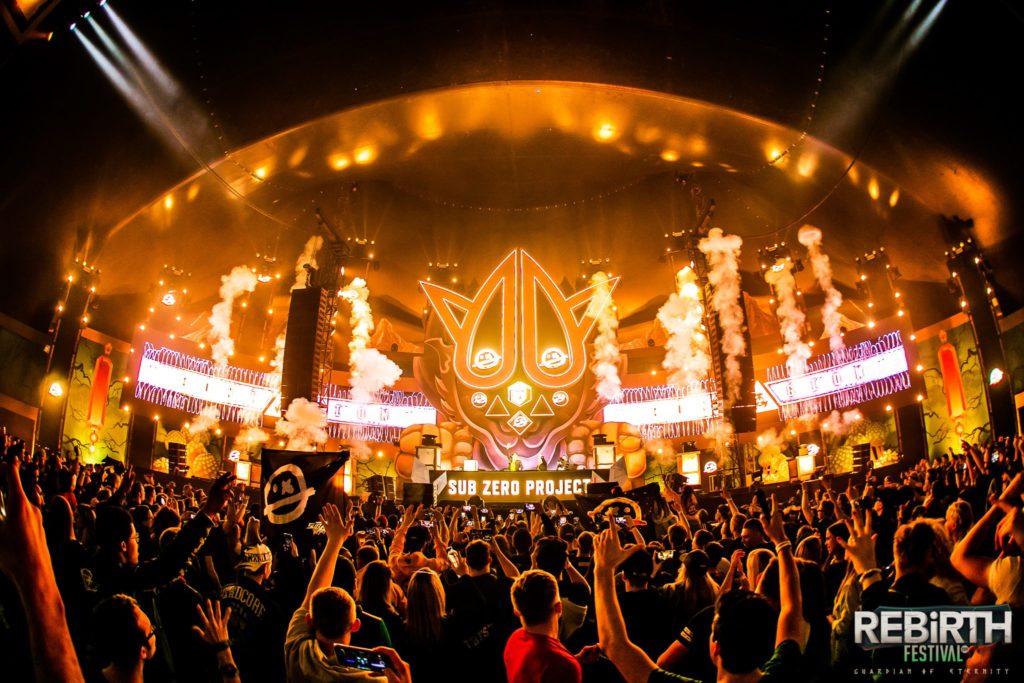 2. The Phuture Noize comeback at REBiRTH

Phuture Noize conquered the hearts of many hardstyle lovers with his Pursuit of Thunder and Black Mirror Society: over the last couple of years he continuously released successful albums. It’s partly because of this, and in order to focus on creating a brand new album, Marco took a break after performing for the last time in September of 2019. However… Phuture Noize will return at REBiRTH Festival! With an exclusive Sneak Peek of his upcoming album Silver Bullet he will make his comeback LIVE at the Saturday’s mainstage.

On Saturday you’ll find End of Line Strive for Domination, Phuture Noize LIVE with his Silver Bullet sneak peek, Killshot Beastmode LIVE, the Dutch premiere of Sub Zero Project’s new live-act Rave into Space, Delete VIP and many others… Sunday definitely won’t stay behind: on this day you’ll be able to enjoy Rebelion presents OVERDOSE, just like Crypsis presents Cryptology vs Statement of Intent, AniMe’s new album Insane Aftermath LIVE and unique combinations like B-Front vs Rejecta and E-Force vs Act of Rage!

After predecessors such as Frequencerz, B-Front, B-Freqz & Sub Zero Project, this year none other than duo Gunz for Hire will have the honor to host the REBiRTH Mainstage on Sunday. Besides being supported by many versus sets, these gentlemen will blast a true Gunz for Hire Classics set through the speakers! With well-known and loved tracks like ‘Kings of the Underground’, ‘Bolivia’ and ‘Sorrow’, this promises to be a true spectacle for hardstyle lovers.

5. The ultimate weekend experience at the REBiRTH Residence Camping

Three full days with the biggest artists, the best activities and the immensely fun friends campsite together create the REBiRTH Residence experience. Bring your own tent or take place in one of the ready-to-use accommodations, and go wild at pre-party’s, after-party’s, Silent Disco’s, during the morning workouts, in the hottubs & much more! As icing on the cake there will also be heated diner and bath houses, so you are very well looked after.

ALSO READ: Why you don’t want to miss the ultimate weekend experience at the REBiRTH Residence Campsite

How good can it get? Well even better, because this year REBiRTH Festival will fit perfectly into your work or school schedule. The 13th of April 2020 will be Easter Monday, so everyone’s free the Monday after the Island of Infinity! This is for sure another good reason you don’t want to miss out and should buy your weekend tickets very soon now: “Get ready for the summer vacation of a lifetime and join us to celebrate the ultimate weekend kick-off of your festival season!”

7. Upgrade to a VIP experience

If you want even more extra’s, upgrade to VIP experience! This means a separate VIP entrance, a unique VIP bracelet, bubbles for welcoming, an upgraded VIP deck, a bigger range of drinks at the VIP deck, fingerfood and access to separate VIP toilets. But beware: tickets are selling extremely fast and by now 85% has sold out already. Do you want to be nice and comfortable during the start of the festival season? Get your VIP tickets right here!

Not only the festival season will kick off with a bang at REBiRTH Festival, also for the first day of the weekend there’s more than enough to look forward to: like the very first Friday pre-party with not one, but two huge areas! The REBiRTH campsite pre-party proved to be a big success last year, which made the organisation decide to invite even more big names. 3 full days of REBiRTH Festival – including REBiRTH Residence Camping and therefore access to this epic party – will only cost you €95 excluding service fee! For a weekend ticket (Saturday/Sunday) you only pay €67,50 (excluding service fee).

For Island of Infinity REBiRTH Festival has once again presented an immense line-up. More than 200 (!) artists will take place behind the decks to provide you with harder styles highlights. With Act of Rage LIVE, D-Sturb, KELTEK, Deadly Guns, Crypton and Deluzion vs. Uncaged there will truly be something for everyone. Besides these ‘normal’ sets there are also more than enough specials waiting for you…

Of course there’s no better feeling in the world than visiting your very first festival of the year. REBiRTH Festival has been known for being the ultimate kick-off of the season, where you’ll finally be able to go wild outdoor. Drinks and dancing while enjoying the beautiful spring sun, how amazing does that sound?

10. Enjoy the complete spectrum of the harder styles

From hardstyle, classics and freestyle all the way to raw hardstyle, hardcore en uptempo: at REBiRTH Festival you will be able to enjoy the full spectrum of the harder styles. Crave something different during the Island of Infinity weekend? No problem! You can party Dutch style in the Party Arena, or go shake your booty at the #BeetjeDansen on Sunday with among others Jody Bernal and Smèrrig Diskjochies!

In total you will be able to go wild at no less than 15 (!) stages during the new edition of REBiRTH Festival. If you visited the kick-off of the festival season before, you like no other know you definitely cannot miss the hard outdoor stage, and of course the immense REBiRTH Mainstage – well-known for the thousands of lovers that unite in this grand tent.

Ever since the last couple of years also hardcore lovers can happily visit the opening of the festival season. Where Friday will be closed down at a high BPM, on Saturday and Sunday the REVENGE stage will house some of the biggest names within the scene like Angerfist, Deadly Guns, Sefa, Partyraiser, Miss K8, GPF, Spitnoise, Vandal!sm vs. Trespassed and so on. We know from last year the atmosphere during these two days of hardcore was out of this world, because what’s better than kicking your Airmax outdoor to some of the hardest beats?

12. Let the journey to REBiRTH begin

So, you have an enormous offer of exclusive artists, a grand program of three full days and you’re ready to kick-off the festival season. REBiRTH offers many travel possibilities, like shuttle busses to and from Oisterwijk central station, your own bus or touring car, an organised tour with official travel partners, a Kiss & Ride, taxi’s and so on. Check all info on the website: https://www.rebirth-festival.nl/reizen/

REBiRTH Festival 2020 – Island of Infinity will take place on the 10th, 11th and 12th of April at the Raamse Akkers in Haaren. Tickets for this kick-off and the REBiRTH Residence Camping are now available via the official website of the festival, and head over to the REBiRTH Residence website for more info about the accommodations.

REBiRTH will come with a special livestream: “To try and ease the pain!”

REBiRTH Festival 2020 cancelled due to coronavirus: “This goes far beyond disappointment”

Over the last couple of weeks the coronavirus had spread across the entire world at a shocking rate. In The Netherlands huge measures have been taken in…