We’ve all been there. You’re standing in front of your mirror wondering what to put on to the festival tomorrow. The green Nike’s with the red shorts and blue sweater, or perhaps the purple trousers and your new blouse. Fuck it, who needs a shirt anyway? Just put on some jogging pants and a cap! Or maybe…

All of a sudden it hits you, how could you be this stupid. You start walking around the house and grab the weirdest shit you can find. A garbage sack with some holes in it, your mom’s skinny jeans, some face paint and a big cowboy hat to top it off. There you go, the perfect outfit.

This article is a tribute to all the people who are dedicated to bringing out their epic and symbolic outfits when they go out to party. Because let’s be honest, the Hardstyle scene is that one place where no one gives a fuck and you can do anything you like, anything. 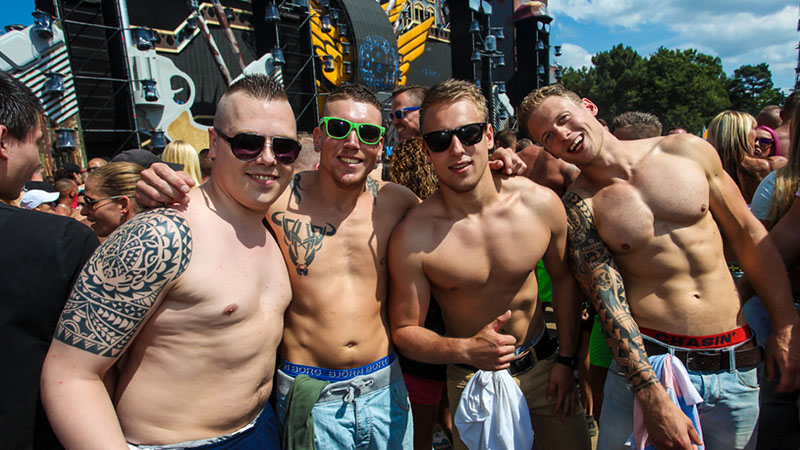 1a: the basic boy
This is probably the most common outfit and we’re all guilty of dressing like this at least once. A pair of Nike’s, some shorts and no shirt, that’s it. It’s the perfect outfit; it’s comfortable, easy and we can show our huge as pecs and raging biceps, or at least we think.

This look does a great job of describing the scene and will surely do so for decades to come. For the experienced party people there is the option to add the additional sunglasses and cap, but that’s really the maximum. 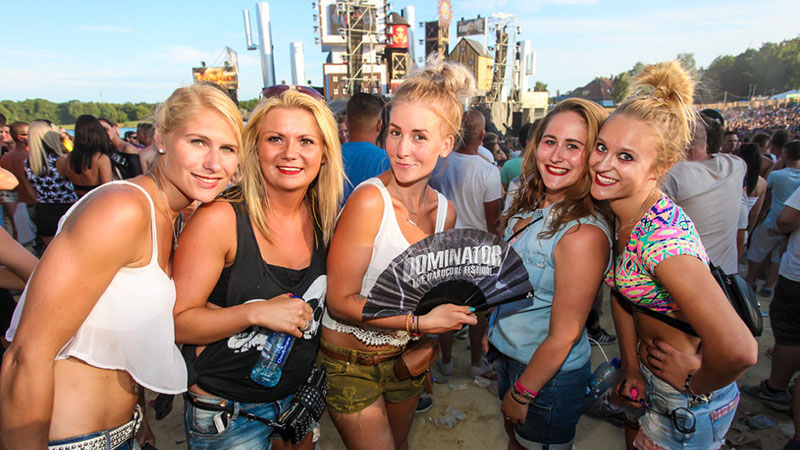 1b: the basic girl
There is nothing as beautiful and important in the world as the dance between the sexes, this makes no exception for the Hardstyle scene. When there are boys, there are girls and when there are girls, there are boys. And what could we boys possibly love more than the classic girl outfit? Some Nike’s a small top and a pair of shorts that barely reveals the outlining of those delicious buttocks.

In my humble opinion I think we should no longer define a difference between girls and boys, but somehow girls don’t agree and I keep getting slapped in the face when I tell them to take off their shirts. That’s feminism for you…

No point in denying, we’ve all dressed like this. 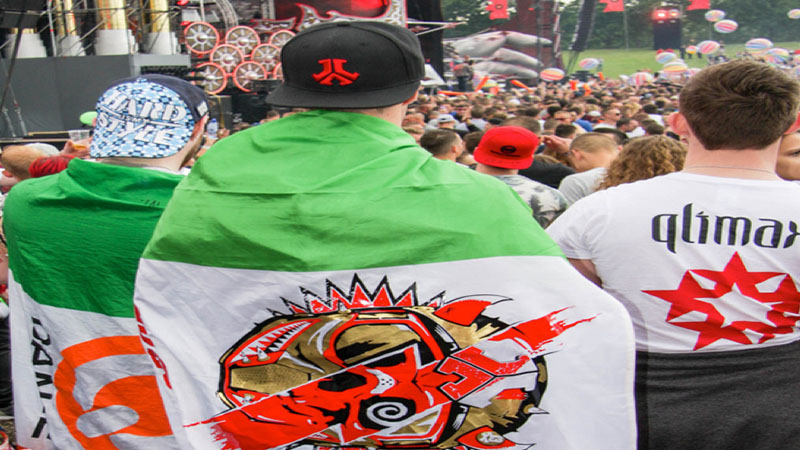 2: The cape
The cape, the cloak, the flag, the banner, the sheet, It goes by many names but it is what it is, a piece of cloth wrapped around your shoulders. Something so simple yet so profound, it could almost qualify as one of the most bad-ass outfits ever. We’ve all seen them and maybe even worn them at one point. I remember the first time I wrapped myself in this majestic beauty, I felt like superman spouting lasers from eyes and flying across the crowd. And no boys and girls, I wasn’t on drugs, it was the cape. It was!

With its bright colors, patterns and logos there are a couple of them we can distinguish in categories:

The flag: Nothing shows displays your patriotism better than this one
The home-made: It’s time for the world to see that white banner you painted when you were high as hell
The logo: A fan, a cap, a pair of sunglasses and a cape with your favorite festival logo on it
The mash-up: A home-made cape with your countries flag and your favorite logo, you’re da real MVP 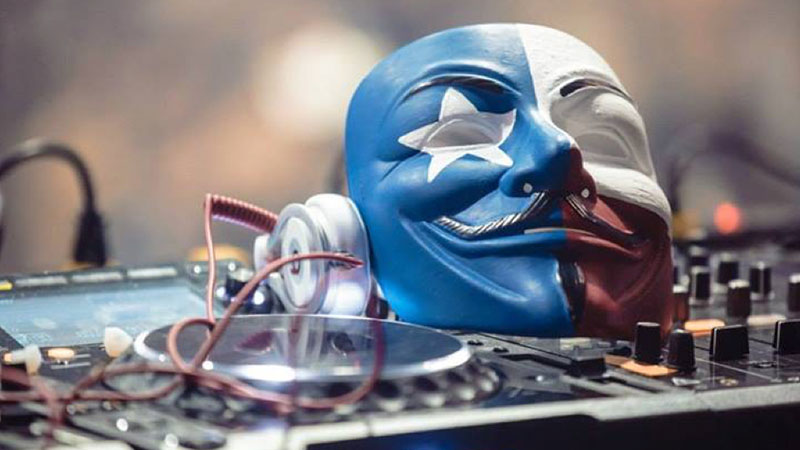 3: Guy Fawkes
“Remember, remember! The fifth of November, the gunpowder treason and plot. I don’t see a reason why the Hardstyle season should ever be forgot”. The Guy Fawkes mask AKA the anonymous mask AKA the Toulouse mask, is a beautiful, simple and elegant mask. Its popularity has wildly increased over the years and it is slowly starting to melt into the foundation of the scene.

The elegance of this mask goes hand in hand with its slightly creepy emotionless expression. It’s almost like unwrapping a Christmas present, you have no clue what’s behind it but you’re sure it’s someone awesome. Or a serial killer, I mean, what’s Christmas without a serial killer right? 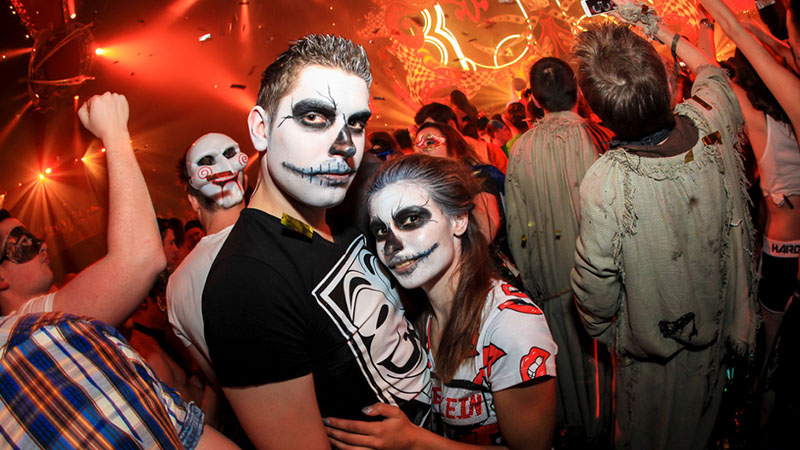 4: The undead
This amount of times that I shat my pants when I wasn’t paying attention and all of a sudden saw one of these pop up is too damn high. Even though the undead face paintings can be scary, I really admire and respect people who take the time to contribute something so awesome to the festivals. I really do. After all it’s all these small contributions that makes a festival that extremely surreal world we all love to wonder in.

There are many different variations on the face paint, but executed correctly they all look good. If your one of those people who wants to know what it looks like before putting in all the time and effort, just look in the mirror on Monday the 26th of June and you’ll have quite an accurate example. 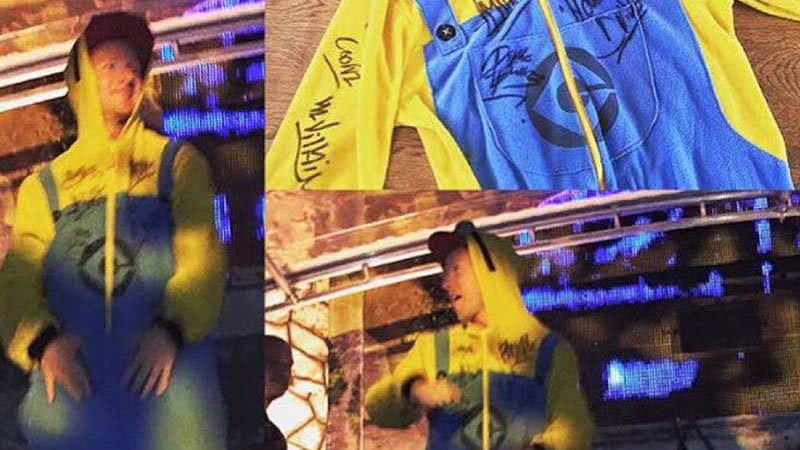 5: Banana!
Even though they made their debut back in 2010, these little fellas have become incredibly popular the last year. Minions, the evil yellow buggers are just too cute to hate. Whether they kidnap your dog or steal the moon, you just can’t get mad.

It even went to such an extent that one of my friends decided to throw his minion onesie to the one and only MC villain at The Qontinent. Villain being the (little) bad-ass that he is, put the onesie on and signed it. I think the point is pretty clear, everyone loves minions!

The minions also proofed to have a great sense of Hardstyle, you can listen their Hardstyle track here. 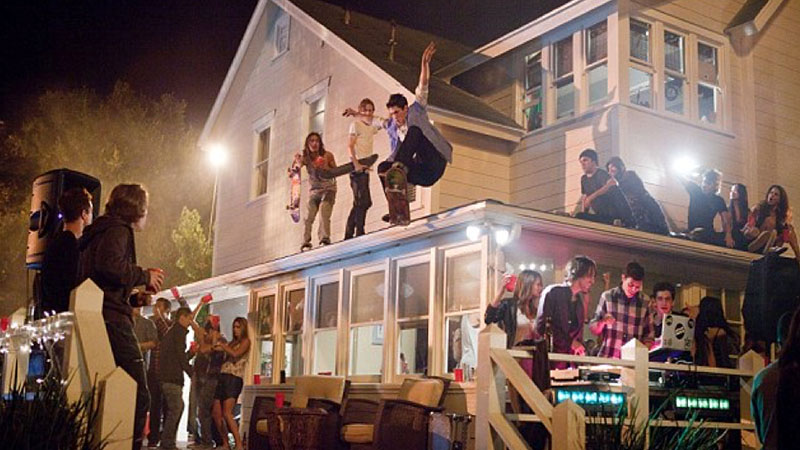 6. The jammies
I guess this “outfit” is more like a separate genre of outfits. We are all familiar with those house parties that have that dark and underground touch to them. And the rule of not giving a fuck what you wear there applies even stronger then at a festival. But that doesn’t mean we seek our solution for creativity in extravagant outfit, rather we choose the comfortable.

And what is more comfortable then your pajamas? Whether it’s a long trouser Mickey Mouse outfit, a bathrobe or the Adam outfit, nothing beats the comfort of your pajamas. Maybe an Adam outfit with a set of dangling cohones won’t be appreciated by everyone, but luckily you can get yourself a decent G-string for a couple of bucks. 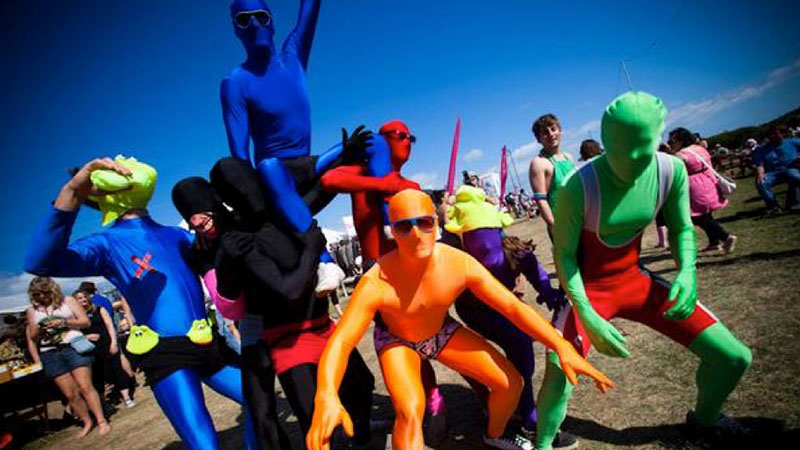 7. The morph suit
I’m going to be straight up and admit that I’ve never worn one of these shiny smooth bastards. The reason could be that I have a super rare condition called hyperactimusadumus which doesn’t allow my skin to breath if there is anything tight surrounding it. The reason could also be that I’m too lazy to take of a suit every time I shake hands with my little friend, who knows.

But my affinity for laziness and beer aside, we’ve got to give some major props to the inventor of the morph suit. Besides showing all your curves for the world to see, there is a ton of prints you can choose from to really become someone else for a day. Want to be the power rangers with your friends? Done. Want to be the slender man? Done. Want to be Green? Done.

The options are endless and there is even faceless morph suits for the vain and drunk people among us. If only there was a little hole at the bottom…

#Creativity
Now that we’ve taken a look at some crazy and amazing festival outfits it’s time for you to take matters into your own hands and create a new trend! Leave your suggestions in the comments below or even better, persuade your friends to join you in your crazy idea to the next festival you go to. The same goes if I missed out on your favorite outfit, let us know! Remember that there is no limit to creativity and that it doesn’t give a crap what you wear. Rave on boys and girls.

7 festivals you don’t want to miss this year

The new year has begun. Which means it won’t be long before spring arrives and we can go out again and sweat our balls off at some…