1. REBiRTH Festival 10th anniversary
4 April 2009 was the date when the very first edition of the REBiRTH Festival took place. Meanwhile, we are several years later and the 10th edition will be organised on 7 and 8 April. This ‘10 Years Ceremony’, as they call it, promises to be bigger than ever before.

2. Let your hair down for a whole weekend
Not only the Saturday, but also the Sunday of the REBiRTH Festival is a whole day of celebration. This way, you make the kick-off of your festival season a whole weekend experience. And we all feel crappy on Monday anyway.

3. Five areas filled with artists
Not only the Saturday has five areas, on Sunday you can also go crazy in no less than five different areas. On Saturday these are the REBiRTH mainstage, REBELLiON, REBORN Raw, REACTiVATE and RELiSH. On Sunday you can stretch the weekend a little with B-Freqz hosting on the mainstage, REVENGE, REBORN Euphoric, #BEETJEDANSEN and Gezelligheid kent geen tijd. 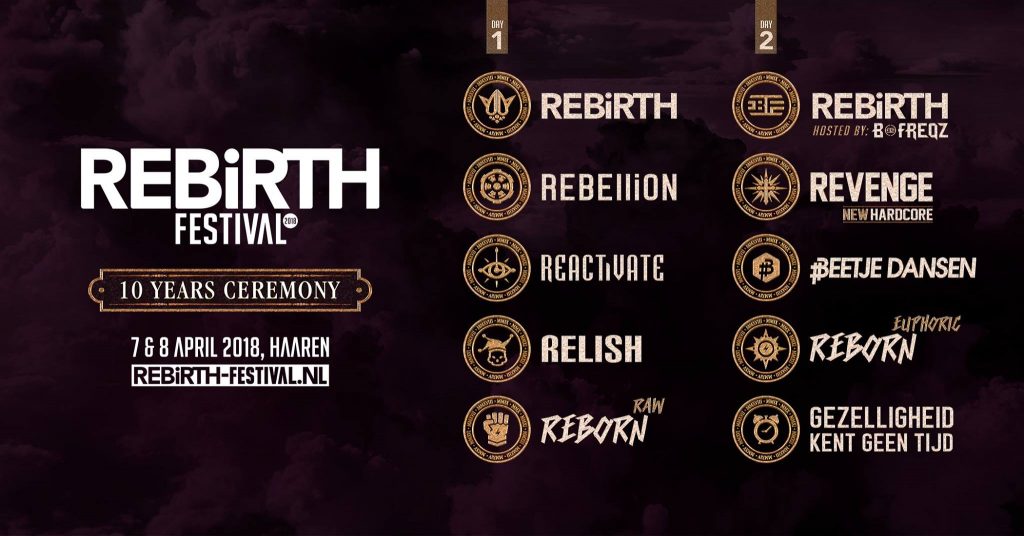 4. Hardcore in the REVENGE area for the first time
For the first time in the history of the REBiRTH Festival there will be a filled hardcore area on Sunday 8 April. Artists like Angerfist, Destructive Tendencies vs F. NoIzE, Korsakoff, Deadly Guns and AniMe will provide hard kicks, high speeds and a heavy bass.

5. B-Freqz hosting the Sunday mainstage
The popular act B-Freqz, consisting of B-Front and Frequencerz, will be taking over the mainstage of the REBiRTH Festival on Sunday 8 April. With their new album in the pipeline, it’s clear that a lot of new music will be presented at REBiRTH. Naturally, the whole Roughstate family will be present, including a unique ‘B-Freqz & The Crew Closing’ act to end the day.

6. The most exclusive live acts on one stage
This year the REBiRTH Festival managed to rope in not one, not two, but three exclusive live acts that will completely blow away the mainstage. No one other than Radical Redemption LIVE, Gunz for Hire and B-Frontliner will be dragging out your energy until the wee hours. Charged with an arsenal of absolute hits, fat basslines and the hardest kicks, one thing is certain: you and your shoes and especially your legs will be in for a tough time.

7. A variety of styles
With no less than five areas on both days a whole range of styles will come by. Not only will hard style be broadly represented (raw, euphoric classics), hardcore, freestyle, urban and even Dutch music will be offered during the weekend of the 2018 REBiRTH Festival.

8. Battle Royale during the REBiRTH Festival
A whopping 13 battles between artists are planned for the Saturday and the Sunday. From Destructive Tendencies vs F. NoIzE, to Warface vs D-Sturb and E-Force vs Regain. Expect unique combinations that will together see to an unprecedented show.

9. With 15 special acts spread over the weekend
As we already mentioned above, Radical Redemption LIVE, Gunz for Hire and B-Frontliner will take to the mainstage on Saturday. But there’s more. Divided over the weekend, ANDY SVGE, Public Enemies, Bass Chaserz, The Opposition, Nightbreed, Mind Dimension, AVIO, B-Freqz, Warface and E-Force will be surprising the audience with a special live act. In addition, Deadly Guns will play a special album showcase.

Tickets for REBiRTH Festival 2018 on 7 and 8 April are available via www.rebirth-festival.nl.

Tune in now for the special REBiRTH Festival 2020 livestream!

REBiRTH will come with a special livestream: “To try and ease the pain!”

REBiRTH Festival 2020 cancelled due to coronavirus: “This goes far beyond disappointment”

Over the last couple of weeks the coronavirus had spread across the entire world at a shocking rate. In The Netherlands huge measures have been taken in…