Ran-D and Adaro are performing as Gunz For Hire since 2011. Together they had some big hits with tracks like ‘Bella Ciao’ and ‘No Mercy’. Last week they uploaded the video of their latest track ‘Don’t Look’ and tomorrow the gangster duo will premiere their brand new show ‘Blood Brothers’ during Reverze 2019.

Adaro and Ran-D came up with the idea of this gangsterconcept around 2009/2010 after they started to collaborate more often. “We decided to start a live-act that had to be unique and contained a high level of entertainment. After some brainstorm sessions, Gunz For Hire was born and the rest is history.”

According to Randy and Thijs, the power of the act is the combination with the music. “You can put a mask on, but without good tracks you can’t stay relevant as a live-act”, so do they explain. “Just look back to the history of Gunz For Hire music, every now and then we have some tracks that are doing very well. You can’t force that, but in the studio we can get the best things out of each other.” The guys are working very hard to keep this succes going. “We are always looking for some variation in our tracks to keep the shows interesting.”

“Especially the frightening atmosphere is very important to this track”

Last week, the DJ’s came with their latest weapon, ‘Don’t Look’. The track is based on the Netflix movie Bird Box and you can clearly notice that. “The speech in the beginning sums up the theme perfectly. Together with the statements from the movie, it gave us the idea for this track. Especially the frightening atmosphere is very important to this track.” The guys are telling us that ‘Don’t Look’ is one of the new tracks that we can expect this weekend during Reverze. “This track will definitely be part of our new show, also in the visual part of it.”

Earlier on, Gunz For Hire performed at Reverze in 2012 and 2016. The reason to premiere this new show at the biggest indoor harder styles event of Belgium wasn’t difficult for the guys.“Reverze 2016 is still in our hearts! That was one of our sickest Gunz For Hire performances ever. Reverze is using a lot of LED at their stages. For us, that is an ultimate weapon to get our show to the next level”, so do they explain.

Previously they did tours with shows like ‘We will be Immortal’, ‘Armed and Dangerous’ and ‘No Mercy’. These were all very unique shows in their own way. “The theme of this new show is ‘Blood Brothers’. For this new show we made a lot of new music and we’ll keep doing that during the tour. Our VJ worked very hard for the new visuals but we would like to let you experience that by yourself…”

“Expect an visual and musical madness”

The guys tell us that they are not slowing down. They would like to perform at the Asian countries more frequently. “Recently we performed in China and that was crazy! The future for hardstyle is looking great in these Asian countries and we would like to be a part of that”, so are Ran-D and Adaro telling us enthusiastic. 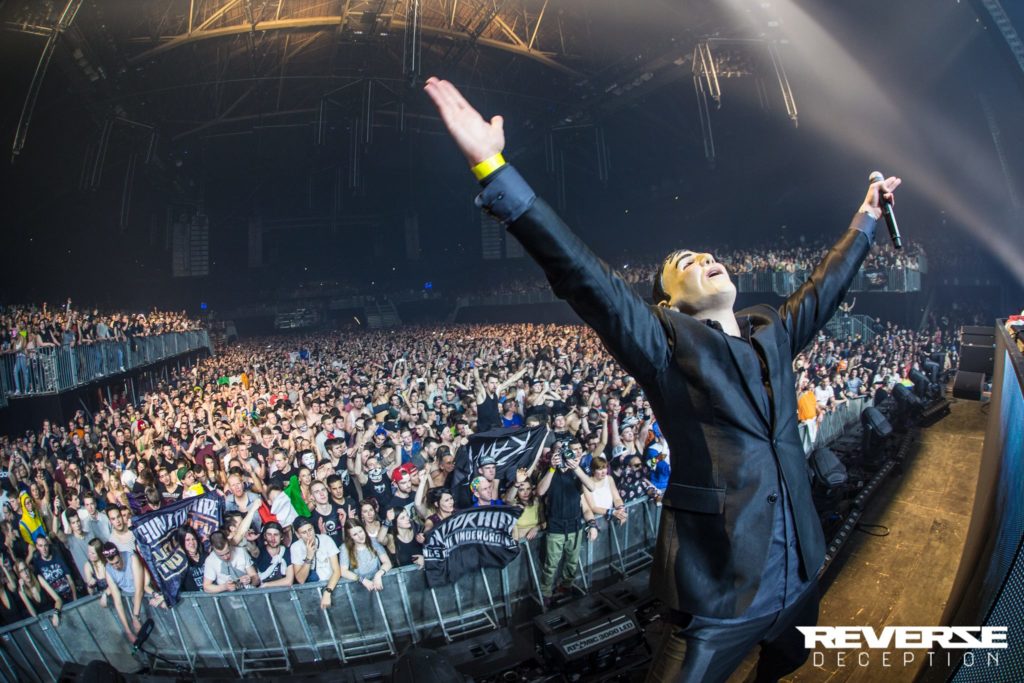 In some countries, hardstyle isn’t quite as popular as it is in The Netherlands. Because of that, Gunz For Hire is constantly changing their shows. “We sometimes use more melodic tracks in our shows when we perform in these countries. Because of the wide choice we have, we can do this for countries that aren’t so familiar with hardstyle”.

The guys won’t spoil to much about what we can expect tomorrow during Reverze. “Expect an visual and musical madness. Reverze will be 30 minutes of Gunz For Hire ‘Blood Brothers’ madness, and you will experience it!” As we speak, the guys are producing new bombs that they will drop and preparing themselves at full speed for Reverze.

Tomorrow, the new show themed ‘Blood Brothers’ of Gunz For Hire will be premiered at Reverze 2019 – Edge of Existence. A sold-out Sportpaleis and Lotto Arena will witness this brand new Gunz For Hire attack live. Reverze is totally sold-out so tickets aren’t available any more. For more information about the event check out the official website of Reverze.

Adaro & Endymion again in the studio for a collab: “Time for a new bomb”

On Adaro’s and Endymion’s, socials fans could see that both hardstyle acts went together in the studio to work on a new collab. After two earlier collaborations,…