Qlimax 2018 was a real Game Changer

Last weekend it was finally time for Qlimax: one of the biggest indoor events of the harder styles, which unites thousands of international music lovers at the Gelredome and guarantees a show that will give you goosebumps all over.

Leading up to the event, there were loads of heated discussions about the Qlimax 2018 line-up, and of course I have my own opinion about this as well. Qlimax is way more than just the line-up: it’s the grand location, an amazingly well executed show and all these music lovers that unite every single year. This is why I don’t want to miss out on any Qlimax edition, and I was just as excited for this year as well!

The very first goosebumps of the night

Back to the evening itself: on the 24th of November it was finally time and we were on our way to to the Gelredome, everyone super excited. Entering the dome went quickly, after which we soon put money on our Gelredome Wallets and rushed to the dancefloor with a cold beer in each hand. We were just in time for the grand opening: normally this takes place at 23:00, but now thousands of people turned their heads to the big curtain at 22:30. Here I want to give out the fist compliment to Q-dance: adding the large white curtain makes the opening way more spectaculair. I definitely had goosebumps all over when the curtain fell and Sound Rush opened with ‘Take It All’: amazing!

The stage that was revealed is also worth mentioning: a large head decorated with countless of lights, lasers and other beautiful decorations immediately reflected the true Qlimax feeling. The men from Sound Rush continued their set with a remix of ‘Rebel’, ‘Rhythm Of The Night’ and ‘So High’: nice classics! Also my compliments to these gentlemen, they definitely exceeded expectations for their very first time at Qlimax. After these two, Coone took over the stage. The stage itself also changed: the head opened up and revealed a whole ‘new’ stage with a large led screen. This is exactly how Qlimax is meant to be: moving elements with a show that surprises you throughout the whole night.

Feast your eyeballs on this amazing view

Back to the music: Coone played a great set, with tracks such as Dark Sun‘ and ‘Faye‘ that did especially well with the audience. Also ‘CTRL‘ and ‘Hurricane‘, combined with a beautiful lightshow, made sure of some great moments. Above all, Coone’s previous Qlimax anthem ‘Rise of The Celestrials’ really was the highlight of this set. After Coone the men from Bass Modulators claimed their spot behind the booth. In this set it was espacially cool to witness their new track live, with a performance by house of talent resident Bram Boender. Furthermore, the beautiful ‘Oxygen’ created a nice atmosphere.

Next up: the live-set of the night by none other than Wildstylez. We decided to watch this set on the stands in the back of the Gelredome, where the Qlimax show can really be fully appreciated. I can definitely recommend you to take a few steps back during Qlimax and admire the bigger picture: it will leave you speechless. Wildstylez’ set was really good and even though we were on the stands, everyone went wild and screamed along with ‘Legends Never Die’ (we can be so happy when that one will finally be released). Furthermore his 2017 anthem ‘Temple of Light’ of course couldn’t be missed, and made the whole Gelredome go wild. This was without a doubt one of the best sets of the night.

An abundance of fireworks during the anthem-show

After Wildstylez it was time for the men of the night: anthem-makers Sub Zero Project. The set also started with the anthem ‘The Game Changer’, which of course went paired with a grand lightshow and an abundance of fireworks. The tracks that stood out most from this set, and made the crowd go completely mental, were the new collab with D-Block & S-te-Fan called ‘The Darkest Hour Of The Clock’, the edit of ‘Adagio For Strings‘ and of course ‘Our Church’.

The happy-hardcore alter ego of Da Tweekaz: Tweekacore was next to take over the stage. These gentlemen have received quite some hate online; you either love them or you hate them. I am part of the first group, and I believe they rocked this set as well. They started out with ‘Down With the E’, and followed with bangers such as ‘Komon’ and ‘Partystarter’. In general, there were indeed a lot of remixes that didn’t really fit the upward trend of ‘hardness’ at Qlimax. It was however lots of fun to see them close with a new Disney remix of The Lion King.

Phuture Noize is a real boss

Afterwards it was up to Phuture Noize to claim his spot for the second year in a row. This set was, like everyone already expected, totally amazing. Tracks like ‘Drift Away’, ‘Circles and Squares’ and the new ‘A New Day’ were blasted through the Gelredome, and even though these are so hard on their own, I really feel these tracks embody the feeling of Qlimax. For me, the highlight of this set was during ‘Fire’: the atmosphere made everyone go mental. This was definitely my favorite set of the night! 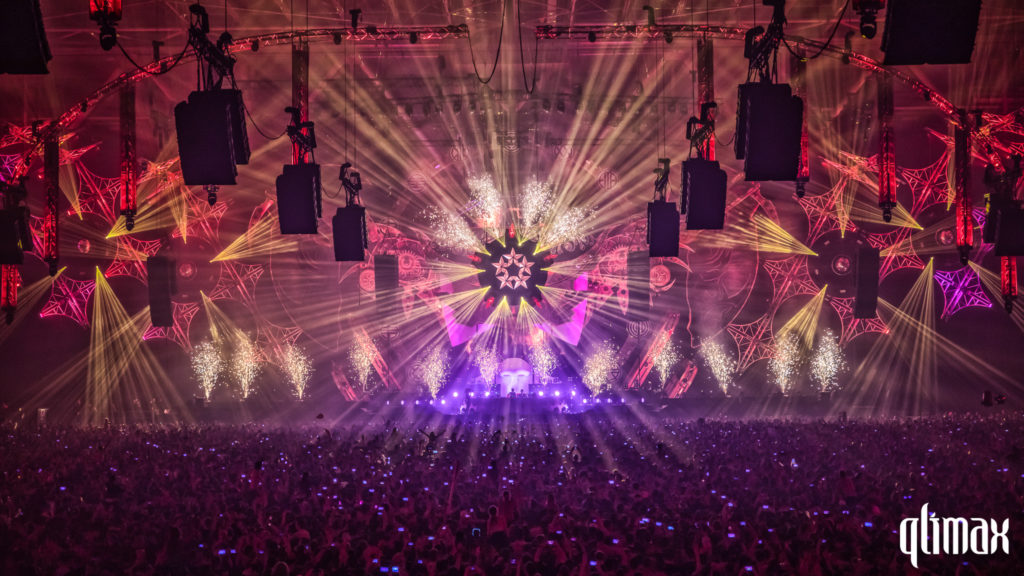 After this banging set Phuture Noize got to stick around: together with Sub Zero Project he provided us with a little surprise set of fifteen minutes. Of course they played ‘The Fallen‘, which was received very well by the audience. It was a shame this set was so short, but it definitely was a nice bonus to Phuture Noize’s set.

Closing with a heavy dose of frenchcore

Next up: B-Freqz. These three gentlemen have produced quite the classics, which doesn’t make it very hard for them to deliver a great performance. With ‘The Unknown’ and ‘Touch A Star’ (this track is so beautiful, I cannot even) they were very nice to watch. In the meantime, we decided to walk some ‘rondjes’ on the promenade, and to buy some fruit worth 6 (!) euros. Since the Gelredome Wallet has replaced the coins, prices have gone up extremely high, which is a real shame.

If anyone deserves to close down Qlimax, it would be Dr. Peacock. This hero put frenchcore on the map, and with ‘Muzika’, ‘World Of The Dream’ and ‘Trip to Ireland’ he really knew how to make everyone go wild. It was clear the whole audience was so excited during this perfect closing set.

This edition of Qlimax was great: the opening was spectaculair, the stage and the show were grand, and the atmosphere was nice. The highlights of the night were Wildstylez LIVE, Phuture Noize and Dr. Peacock, and I really cannot wait to be surprised by Q-dance at next years’ Qlimax.