Radical Redemption about The Chronicles of Chaos: “It takes you back to, what I believe it to be, the essence of hardstyle”

By now it has been 8 years since Radical Redemption entered the hardstyle scene with his very first album. Now, several years and 5 solo albums later fans can get excited for his newest musical collection: The Chronicles of Chaos! We talked to Joey about the brand new album that was officially released last Friday, and reached well over 500,000 (!) streams within the very first hours of its existence.

In January of this year the word was already out: the 6th Radical Redemption album officially was in the making, in which you would join in on the ultimate story of The Chronicles of Chaos. According to Joey, this musical collection embodies all that Radical Redemption has to offer. “Grand, epic, melodic, ritmic. From beautiful tracks that tell a story, like ‘D.A.D.’, all the way to true bangers like a ‘Dominator Tribute’. The album really builds up, has loads of orchestral elements and takes you back to, what I believe it to be, the essence of hardstyle.”

“This album took me back to the way I started making music in the first place, without any time limits”

Ever since the announcement we’ve been living through quite an intense year, one that for Joey had both a positive and negative influence when it comes to the production of his new album. “The fact that I didn’t have to catch 120 flights and had an empty tour schedule, resulted in me being able to lock up myself in the studio. For this album I could go back to the way I started making music in the first place, without any time limits. Just sitting down and see what comes out of it.” 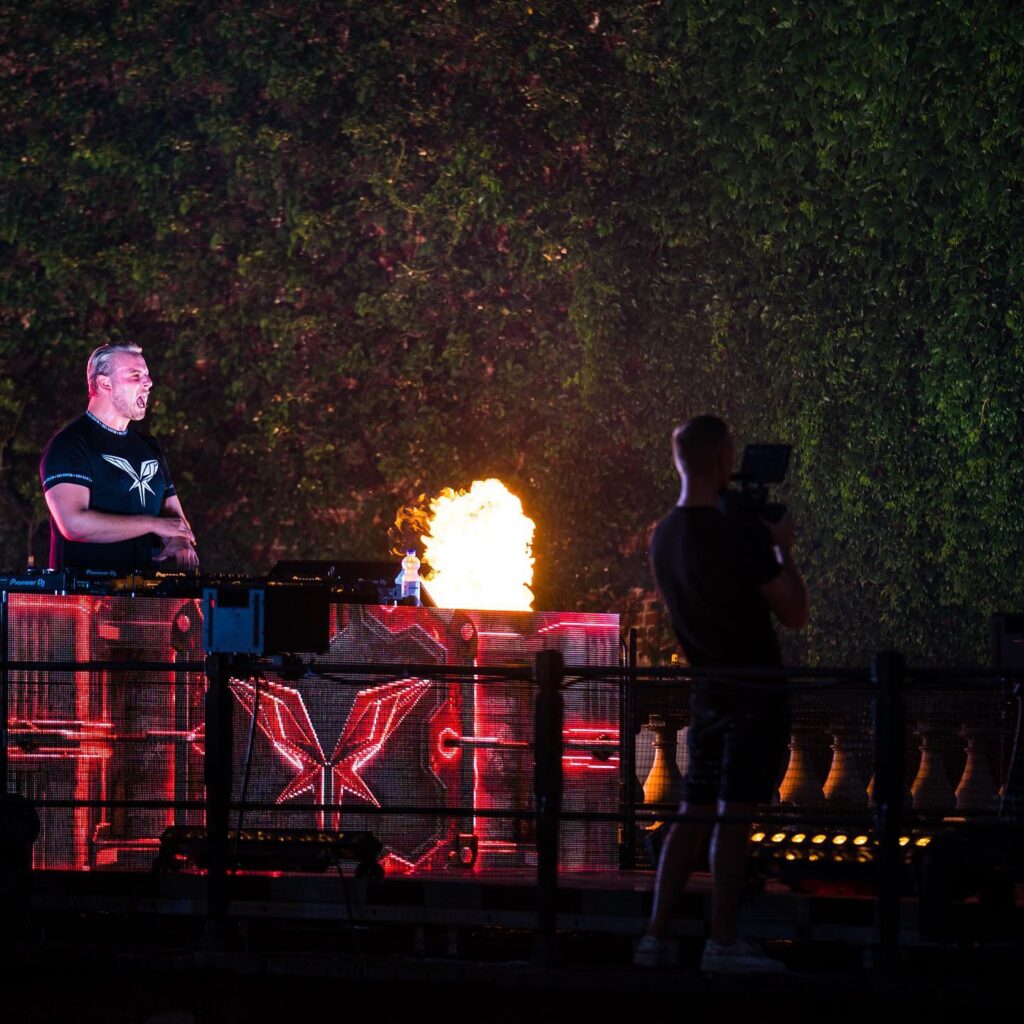 Because of this, he was really able to make the title track ‘The Chronicles of Chaos’ into something unique. “I’ve played and recorded all of the drums, percussions, crashes by myself, which really gives it more of a personal feeling.” For Joey, this feeling of freedom in the studio also resulted in the very best experiences of his career when it comes to producing. “Ever since the beginning everything took off so quickly, that at one point you rely on this ‘trusted way’ of producing. This made me use the minimal amount of time I had in the most efficient way possible. Because of all the extra time I got this year, for this project I was able to work in the studio in an amazingly free way.”

“That’s why this album only contains tracks that fit the whole picture, and truly represent Radical Redemption”

After these busy years filled with one highlight after another, on his 30th birthday Joey looked back on this roller coaster of a time. Among other things, he pointed out that Command & Conquer definitely isn’t his favorite production. “It’s an album I’m still very proud of, but one I had to produce in my busiest year to this day. That’s why there are many tracks on it I do like, but really miss the ‘heart’.” So, for The Chronicles of Chaos he approached it in a different way. “Tracks from which I got even the slightest feeling of being off, immediately were thrown away. That’s why this album only contains tracks that fit the whole picture, and truly represent Radical Redemption.”

From the very first announcement of The Chronicels of Chaos it became clear it would exclusively showcase solo tracks. “In this way, I can really show the stength of my music, the essence of my style. There are so many different paths to be walked.” Observant fans, however, will probably have noticed ‘The Main MF’ Crypsis making several appearances on the musical collection. “It’s my hommage to him. He was the one giving me a chance, introducing me to the label Minus is More. Besides becoming very close friends, he definitely also deserved a spot on this album.”

“I wanted to create something truly special, but also easily available to my fans – who’ve always supported me”

The records show what Radical Redemption has become to represent over the last couple of years, and to Joey they perfectly showcase his own sound. According to him, fans’ reactions to the brand new album have been overwhelming. “I know for a lot of people my last album Command & Conquer wasn’t their favorite, but they continued to have my back. Always keeping faith, always supporting ‘Radical Redemption’. For me that’s an amazing feeling, a feeling of appreciation, one that gives me so much confidence. I really can’t wait until I can play all of these tracks live for the very first time.”

Even though fans will unfortunately have to wait a while before hearing the album being blasted through the speakers live, a couple of weeks ago we were treated to a one-of-a-kind livestream: recorded on the land of castle Twickel. “I actually live in a monumental farm which is a part of this beautiful property. I wanted to create something truly special, but also easily available to my fans – who’ve always supported me through the years and now have to live without events. It was very important to me to give back, especially in these times, and invest even more time in my fans.”

“I’m not really the type to express my feelings, and when I can’t I’ll always have music to speak for me”

One of the tracks fans have shared to make quite a big impression is ‘D.A.D.’ – for Joey without a doubt also the most special production of the album. “In the summer of 2019, my dad got diagnosed with cancer. Next came an extremely difficult time. You go through so much, personally, as a family, but also during work. You still want to answer to everyone, take pictures, sign autographs and keep putting up an epic show, even though your thoughts are somewhere totally different. That’s why I wanted to create this track for my dad, but also for my family, to explain how I lived through it”

“It’s a situation so familiar to many. So many people have fought the same fight or experienced it up close, in any way, shape or form. I’m not really the type to express my feelings, and when I can’t I’ll always have music to speak for me. I want people that have been in this situation to listen to this track and be able to think: I can do this! Put your back into it, and enjoy every single moment in life!”

“Together we will celebrate life” is the message Joey shares in ‘D.A.D’, one he holds close to heart as well. Despite of the situation, it hasn’t stopped him to make people laugh this year as none other than Farmer Joe! “When we were done planning the livestream I thought, how can we announce this as original as possible? Together with the boys from the Gladjakkers & NEW DAY studio we opened up a couple of beers and a bottle of vodka and wrote the script: from Radical Redemption I became Farmer Joe, following to play out the farmer life and then find Radical Redemption all over again. Self-mockery really was key here.”

There was no cost or effort saved for the crazy adventures of Farmer Joe: at one point Joey even came in driving his very own Radical Redemption tractor. “We frequently thought ‘what the hell are we actually doing right now’. Redoing a take 20 times because you’re unable to stop yourself from bursting out in laughter. It was so much fun to make, so who knows… There might be a sequel.”

“The feeling of confidence my fanbase gives me is so special, truly ‘unlike others'”

From emotional stories all the way to hard bangers and a unique storyline: all in all the release of The Chronicles of Chaos is a project that will warm every Radical fan’s heart. “I believe this album is a beautiful reflection of what I stand for as a producer. It contains grand melodies, catchy lyrics, melancholic and orchestral pieces, but also many different kicks, sounds, designs and atmospheres. This album really sums up Radical Redemption.”

Radical Redemption – The Chronicles of Chaos has officially been released on all platforms, which you can find via this link. A collection of no less than 19 tracks that take you back to the essence of Radical Redemption. “I’m so proud and I truly want to thank everyone for supporting Radical Redemption since 2012. The feeling of confidence my fanbase gives me is so special, truly ‘unlike others’. It’s my fuel to go to the studio, to produce and most of all to keep being progressive. The sky is the limit!”

Radical Redemption officially has a new album to his name – a new milestone in an exceptional time. The Minus is More DJ received a lot of…

Minus Is More adds a new act to the label: High Voltage

Minus is More consists of five producers, one live-act and one MC. Now the label, as well as its representatives, announced the group is increasing: soon they…

Radical Redemption hints to another collaboration with Nolz

Radical Redemption and Nolz already worked together on a couple of tracks in the past and it looks like it’s going to happen once again. With the…