This was the first edition of IMPAQT – The Festival of Titans

Titans attacked our well-known terrain at Airport Weeze, demolished everything we had build in the last years and took over our familiar festival ground. So I hope you had braced yourself for the debut of the new Q-dance experience, called IMPAQT Festival…

The very first edition of IMPAQT took place under the motto: “The Festival of Titans.” Not only the stage design referred to this topic but also the line-up as just the titans of the harder styles genres were playing. Before the actual festival started, holders of the Titan ticket could already enter the grounds and witness a special opening. MC Villain was already waiting at the entrance at 12 am for the first visitors to arrive. He was sitting on a wagon, just like the famous one at Defqon.1 which collects the people at the camping spot on the first day. The wagon, including MC Villain and a following crowd, made his way over the festival ground and stopped to open the main stage for the very first time. 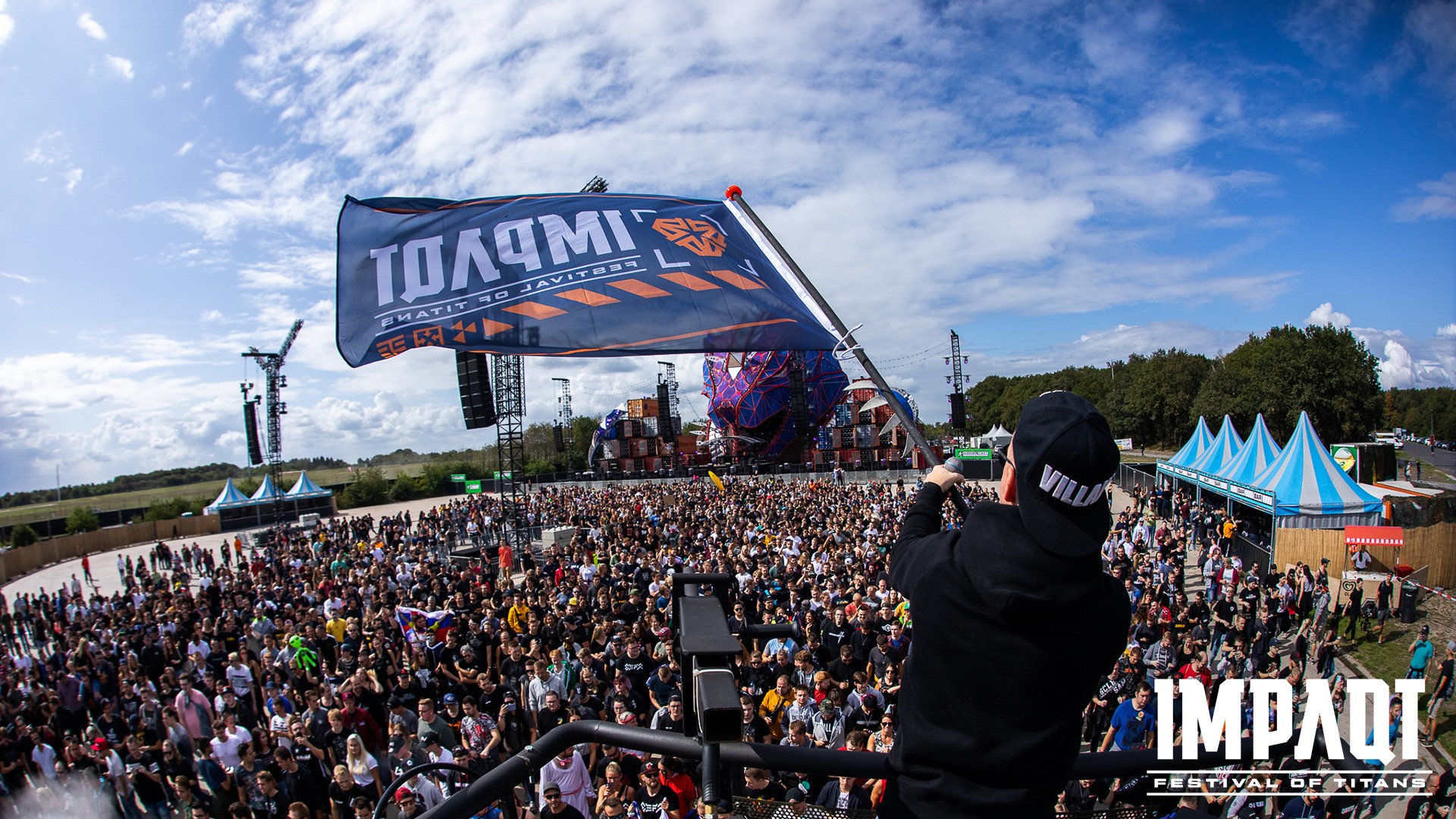 After a couple of tracks the train lead all the people to the raw stage where Rejecta played some of the most famous songs of his album. After they also introduced the hardcore stage, MC Villain made everyone move to The Dome stage. Sefa was sitting on the piano and played The Titan Showcase, together with a orchestra of around 25 musicians and a conductor. The set could remind you of Dr. Peacock in concert and felt like a symbiosis of classical sounds and his frenchcore tracks.

The gates are open for all titans

At 2 pm the official festival started and it began to get more crowded. Primeshock opened the main stage (The Colossus) and D-Attack the raw open-air stage alias The Octogon. We chose to take a walk to see all the stages instead. As “Q-dances chose quality over quantity”, they cut out some stages compared to the last years and limited themselves on six stages. Three different genres divided in three Territories.

Although the venue was the same as last year, it didn’t feel exactly the same. The festival was smaller and by that the ways were shorter and easier to find. We were quite impressed by the stages. Q-dance really put effort in creating these titans as well as in the robots which were standing around to “defend us visitors from the attacking titans”. Sometimes real humans were inside these robots to move them and give it a special extra. Except this, I thought they used decoration quite spartanly. 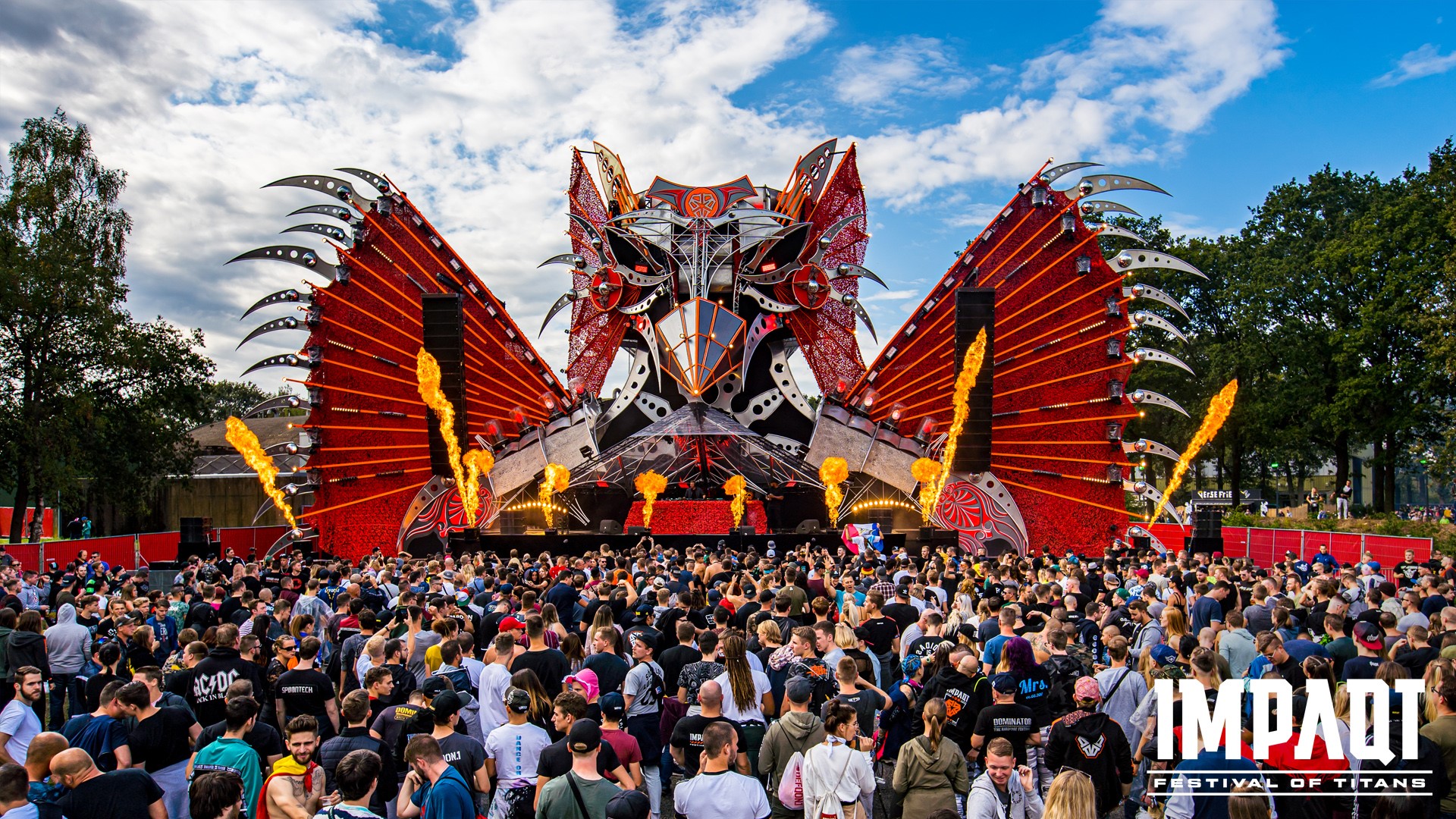 Back at the main stage, KELTEK was about to play. The crowd slowly seemed to get into the mood and didn’t even want to leave the set when it started to rain. Luckily there are these ponchos, which let you dance in the rain without getting wet.

When Atmozfears and Sound Rush started to premiere their 2//\\1 Showcase, our weather god was gracious again. Countless new tracks got premiered at IMPAQT, and so during their showcase. They played not less than five new productions which was obviously highly appreciated by the audience. After that, hardstyle veterans Charly Lownoise and Mental Theo played a special 25 years set in The Dome tent. With lots of their classics, like ‘Wonderful Days’ but also newer releases like ‘Nothing But The Oldschool’ by D-Sturb and Sefa.

READ ALSO: These artists will drop new music at IMPAQT

Q-dance was right when they promised us “the best of both worlds” as you really get to experience a day- combined with a night festival. Since it was the last chance of the year to party open-air, we used the last hours of sunshine to party under the sky with a nice drink in our hands. Noisecontrollers and Devin Wild let us hear their track together for the first time and the crowd went crazy.

Now it was time to get some serious ear damage in the raw bunker aka. The Nest. It was the most crowded set at this stage of the day and the atmosphere was remarkable good as usual when these men are on the turn tables. Nobody could have stopped the audience, when their new tracks ‘Bring me to Hell’ and ‘Bloodbath’ were blasting through the speakers.

Luckily Adaro played a two-hours set, so we quickly went to The Octogon to witness the last bit of it. Adaro invited several DJs he worked with to join him on stage. Also the remix maker of his track ‘Murder’ got revealed when the song was playing and he appeared behind the deck: Invector.

The sun began to go down and Mind Dimension was about to destroy the bunker. Time to klaplong! ‘Room Rocker’, ‘Haters (2019 edit)’ and The Purge’s Remix of Vazard’s ‘Fall’ were part of the reason why The Nest nearly collapsed. The sound system there was exceptional like we’re used to at this location, which was also the case for most other stages.

After that heavy set we really needed to take a breath, so we went around the venue to discover some special activities the festival had to offer. The singers between us could scream their voice out at the hardcore karaoke station, but we decided to jump into the turning rave tunnel. We tried our best – and fell down, just like everyone else we saw in there. It was a great watch and worth a good laugh. Nice to mention is that Q-dance provided two tab water stations, where you could fill up your bottle for free.

We hurried up to go back to The Nest and luckily made it in time to Ncrypta’s set, because it was the best one I’ve ever seen from him. His unreleased track ‘Omega’ with newcomer Fraw was outstanding and the atmosphere couldn’t have been better.

Lots of lasers and lights

The main stage looked quite massive during the day already, but as soon as it got dark it really came into life. The lightshow was on point and made the whole music experience even more enjoyable. Warface played his tracks like ‘Radioactive’ and ‘Menace’, and the lasers went crazy and the stage appeared in colorful lights.

In the last hours it was hard to decide which stage we should visit. A lot of highly appreciated artists were about to follow, but unfortunately you can’t divide yourself in more parts. As we didn’t get to see many artists at The Dome stage, we watched Sub Zero Project presents Contagion. It was fun to get to hear so many edits of their tracks, especially the ‘Patient Zero IMPAQT edit’. 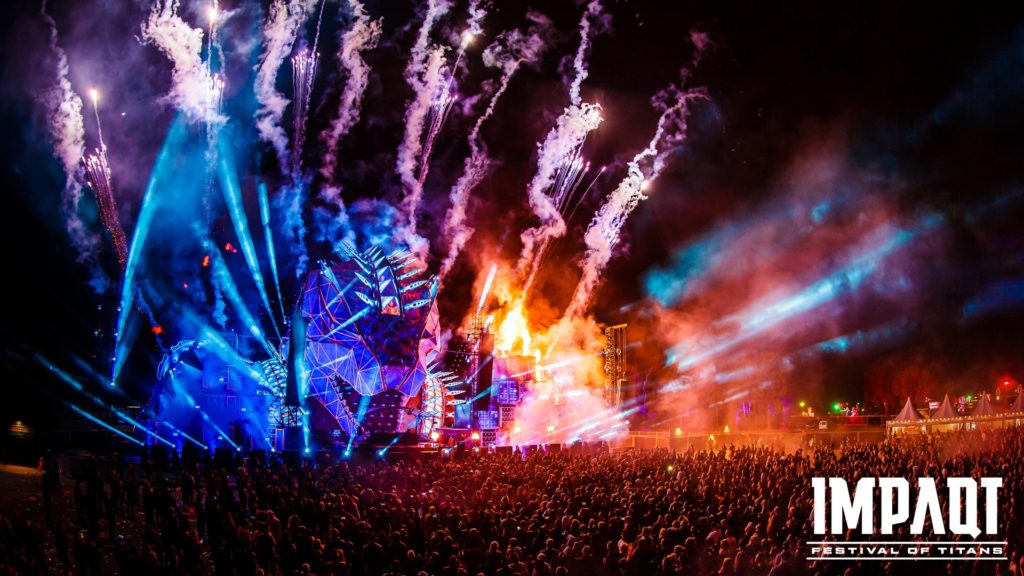 Riot Shift were the ones to close down The Nest bunker and that was one to remember. The crowd were losing their minds; even the ones standing outside couldn’t stand still when their brand new collab with Chris One ‘CNTRL’ was playing, even though they were obviously in need of a break. Riot Shift finished their set again in higher speed: with a new uptempo collab together with Hatred and their ‘Brokkoli’ track with GPF.

Instead of watching the end show and experience the anthem ‘Brace yourself’ by D-Block & S-te-Fan, there was no doubt we’d go to Delete’s VIP set. You could feel many people were at the main stage to watch the fireworks, as luckily it wasn’t that crowded as in all the other VIP’s I’ve seen before. But as usual you could really hear the effort he puts into his VIP sets. We heard some edits for the first time, like ‘Salvation VIP’, ‘Pleasure & Pain VIP’ and a VIP edit of ‘Don’t Hold Back’ from his Alpha Omega album.

With IMPAQT, Q-dance gave their best to replace the old concept. The event ended at 2 am and if you hadn’t organized a transport home, you’d be stranded there until the first train came in the morning. It was nice to party from day to night though and it’s been a solid first edition of IMPAQT. Q-dance had a fun day in store for anyone with a passion for the harder styles, as everyone would find their preferred music in one of the Territories. Next year we’ll all unite at Airport Weeze again, to continue writing our new story “IMPAQT”.

IMPAQT started with a good first edition. The main stage really started to bright up as soon as it got dark and the sound and atmosphere at The Nest were outstanding. We’re looking forward to next year, Q-dance!