XXL interview with The Qontinent: Story Behind Island of Intensity

On the 9th, 10th and 11th of August it’s time for the hardest highlight at one of the most unique festival locations in Belgium: The Qontinent. About 30,000 diehards will move towards the epicenter of a true ‘rave-quake’ in Wachtebeke in the second weekend of August. The Qontinent is the biggest harder styles festival in Belgium and will return for its 12th edition this year. This one will be all about the ‘Island of Intensity’, supported by a grand line-up, six stages and a ‘Ravers Resort’ campsite.

We talked to Nathalie, a part of The Qontinent’s marketing team and really passionate about the harder styles.

The Qontinent is the place to be for the fans of the harder styles in Europe. How does The Qontinent differ from other festivals, what are the 3 main reasons why people should visit The Qontinent?

What makes The Qontinent so unique is the fact that the venue is located on an island, surrounded by a natural environment. The Qontinent guarantees 3 days of partying, a fantastic campsite around the lake, sick stages and an awesome line-up. We want to give the festival visitors a place where they can party with friends, be themselves and experience unique moments with other ravers.

In 2009 we had the exclusive premier to be the first weekend festival within the harder styles ever! It’s funny, even though I live in the Netherlands this was also my first weekend festival ever. To work on the other side, after 10 years, feels great. You know what kind of feelings a festival creates. To be able to create this feeling for other festival visitors, completes my circle.

The recreation area of Puyenbroeck has been representing the festival grounds of The Qontinent since day one. This terrain is just a little more special than what you normally see. Could you explain how the location adds to the experience of The Qontinent?

The theme of this year ‘Island of Intensity’, describes very well what people can expect. The festival grounds are located on an island. An island on which we will go full force for three whole days, enjoying all types of music within the harder styles. It’s a big plus that the festival venue is surrounded by the beauty of nature. The nature and its environment, the music and the feeling of homecoming makes this festival a picture perfect for me. A few friends of mine have never visited The Qontinent before, well I declare them crazy! 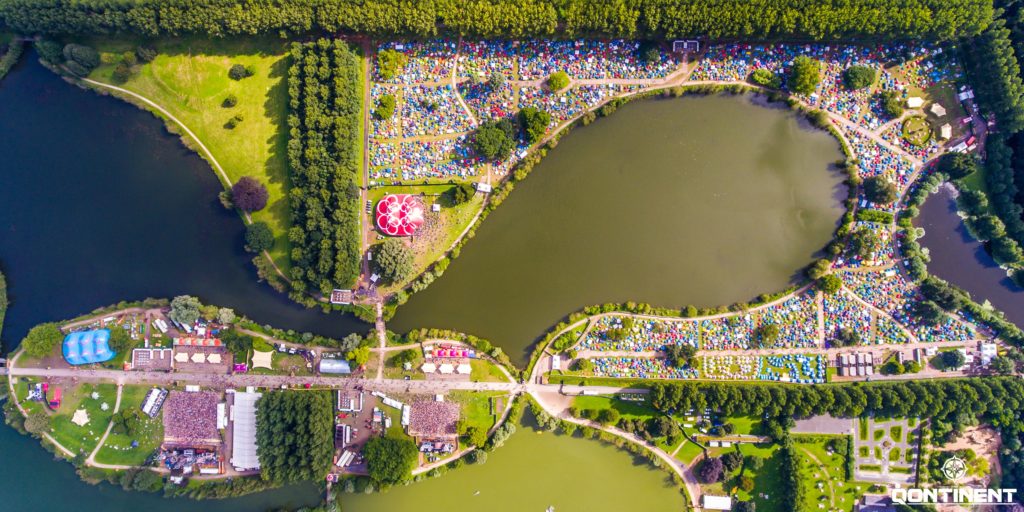 Thematic presentation is also a big part of The Qontinent’s experience. Let’s look back on the previous themes first. In 2015 there was ‘The Last Resort’, in 2016 ‘Rise of the Restless’, in 2017 ‘Decade of Dedication’ and in 2018 ‘Indestructible’.

There is definitely a story which we have been trying to tell over the last couple of years. Hang on, haha!

2015 – The Last Resort
The Last Resort is the newest part of paradise, where survivors of an unlivable world go to. Because of the harsh living conditions a large part of the world has become unlivable. We face troubles, stress and highly set expectations which increases day by day.

After a long journey with many obstacles, The Qontinent represents a little peace of paradise: a finish line for survivors. The Last Resort is a sanctuary where visitors can live carefree. Just for a weekend, a new society of ‘survivors’ has been formed. A passioned Hard Dance society that enjoys the last piece of paradise: The Last Resort.

2016 – Rise of the Restless
The ‘survivors’ that have gone to The Last Resort are slowly forming a community with own norms and values. These values go against the religion of the people. The ‘survivors’ aren’t understood by the people and are seen as rebels. The people call them  ‘The Restless’. ‘The Restless’ rebels don’t agree with the way society is developing. Because they are not understood by the people, they decide to do something radical: for 3 days they will occupy all the buildings and take over the capital. They express themselves with the loudest voice humanity has ever heard: Hard Dance!

The leaders of this movement, the artists, unite the survivors. They use their music to create a sense of unity among the rebels and persuade other survivors to join them. Their revolution is successful: the new radical ideas are being accepted quickly. Letting go of the old and embracing a new, dynamic society is called the ‘Rise of the Restless’.

2017 – Decade of Dedication
After the revolution of ‘The Restless’ rebels has gone successfully, a new era has arrived: the golden age. In this new age, there is only place for the ones, dedicated to Hard Dance music – the most powerful weapon the rebels have ever owned. After 10 years of fighting the battle has been won. These 10 years of dedication, are dedicated to the ones who participated the battle. A new era has arrived in which sorrows will be forgotten and dedication dominates, this is ‘Decade of Dedication’.

2019 – Island of Intensity
The island became a place where the ‘Indestructible’ community has found its home. A home where intensity dominates. A place where people surrender, where people can be themselves. Intense experiences and intense memories are being created and relived. Within this community only dedication and passion rules, because without these two ingredients there wouldn’t be an ‘Island of Intensity’. 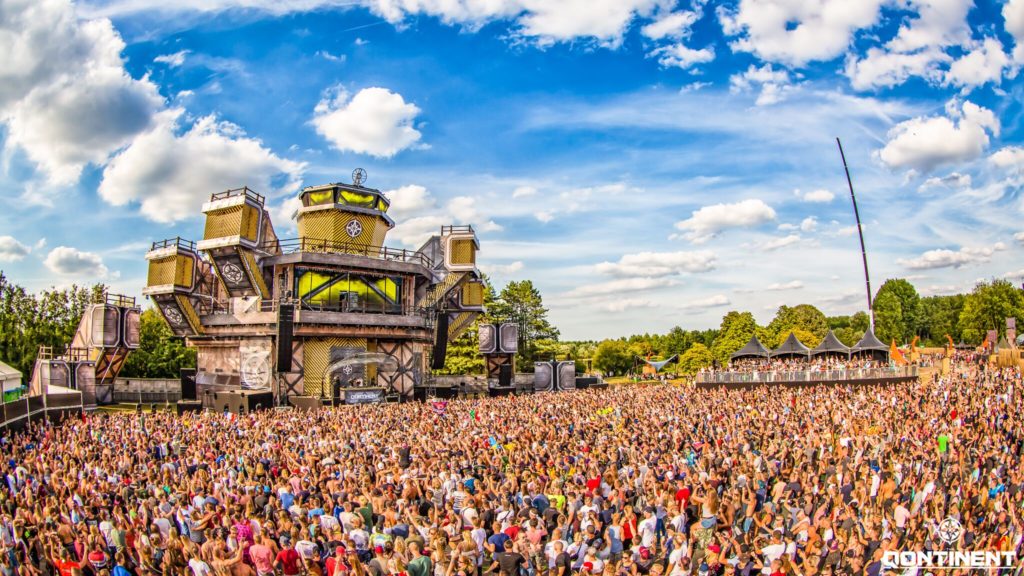 Thank you for telling us the whole story!

Looking at the upcoming edition; how do you incorporate the theme in the festival grounds, and do you try to incorporate them in the stages as well? Can you tell us more about how such a grand theme comes about?

Every year it’s a great challenge to incorporate the theme to the best of our abilities. Shortly after the festival ends we evaluate the past edition and create new ideas. After a lot of brainstorm sessions an entire storyline’s being finished. We transform our storyline into a concept and from there into different concept bearers.

The decoration of the festival can be a concept bearer for example, as well as unique experiences that support the theme ‘Island of Intensity’. We want to tell our story to our visitors to the best of our abilities. Of course we can’t spoil anything yet, but visitors will definitely experience the Intensity of The Qontinent this year!

For you as an organization, what are the most important features of a good theme?

The visitor has to recognize himself in the theme and the story we are trying to tell. Of course this isn’t always easy and the bar is raised higher every single year. Visitors of festivals become more and more critical and their expectations are higher every year – this might be because of the fact that there’s a hardstyle/hardcore event every week. For many people a festival isn’t special anymore, but we try to outdo ourselves every year and keep on growing within a saturated market.

We think thematic presentation is a very big part of your success as an event organization. During the festival you’re submerging yourself into our world, in which you can escape from reality. A world, shaped by the theme of that year.

Looking at my own experience, a weekend festival gives me the freedom to let go of daily routines for a little bit. Even though we live in a ‘me-society’ these days, where everyone goes after their own success, music is the thing that counteracts. Music connects, no matter how different everyone is. It sounds like a cliché, but a festival often feels like homecoming. Coming home to a community, a family in which everyone is appreciated and you don’t have to meet any standards. As an experienced festival visitor I have noticed this feeling is very unique within our scene and we should definitely cherish it!

This year’s anthem maker is Devin Wild: he has to translate ‘Island of Intensity’ into music. Can you explain a little more on how you as an organization work with the theme and story together with the anthem maker?

Choosing Devin Wild definitely didn’t come out of the blue. Devin Wild has proved himself over the last couple of years and we are slowly seeing him following in the footsteps of his hero Noisecontrollers. Nowadays we know Devin Wild’s more than talented and each track he releases proves that as well. We are very happy to have him as our anthem maker of this year.

Firstly we sat down with his management and looked at how we wanted to tell the story of ‘Island of Intensity’. An anthem is a very important part of the experience. You try to take the visitor on a journey, and of course this is a lot of work – an anthem doesn’t just come about. Adjustments are being made until we feel like the anthem is telling the complete story.
We proudly present you the official anthem of this year:

The Qontinent 2019 – Island of Intensity will take place from Friday the 9th until Sunday the 11th of August in Wachtebeke, Belgium. Why can’t you miss this edition of The Qontinent as a harder styles lover?

Since I live in Utrecht, The Qontinent has always been a far-remote-from-my-own-show, until I eventually experienced the festival myself and returned with pleasure every single year. Eventhough Belgium for me still feels ‘foreign’, it’s only a 1,5 hour drive away. A few friends of mine never visited The Qontinent because of this reason and that’s more than a shame!

My first weekend festival at The Qontinent has been one of the best weekends of my life, and no that’s not a marketing trick. I have come to appreciate the festival because the campsite and the festival terrain aren’t too big, you don’t have to walk for hours to visit some friends if they’re on the other side of the campsite. Furthermore, many visitors return yearly to the grounds, which results in the campsite having a village kind of feeling. At festival grounds itself you don’t have to walk hours to walk from one stage to another to visit your favorite artists.

Besides that, the beautiful nature of the festival grounds is a big plus. It’s lovely to be woken up by birds and see how the sun touches a glistening lake. These ‘silence-before-the-storm’ moments are so great. And a few moments later at 08.00h I’ll turn on my speaker to let everyone know, including your neighbors, a new festival day has begun haha.

And why should a stay at the Ravers Resort will complete your weekend (how is it different from other festival campsites)?

The campsite has gone through quite some changes this year: the campsite has been entitled to Ravers Resort, the grounds have expanded, there are countless new activities and ‘Rave Zones’ friends camps have been added.

For me life is about creating and looking back on beautiful and special memories. With The Qontinent we try to be a part of these memories, and with the upcoming edition we want to create beautiful new ones.

The Qontinent 2019 – Island of Intensity will take place on the 9th, 10th and 11th of August at the Belgium terrain of Puyenbroeck in Wachtebeke. The campsite will open its doors on Friday the 9th of August at 15:00 and closes on Monday the 12th of August at 12:00. For more Ravers Resort info you can visit the website.