HSU LIVE has been kicking off your weekends with a huge amount of livestreams for a couple of months now. But did you know that there is an incredible story behind it? We sat down with Pete Finley (Director of HSU), who explains why an Australian organization would build an entire TV studio in the middle of Amsterdam. That’s 16.632 kilometers away from home, just to make sure that all harder styles artists and fans still have something to enjoy in these weird COVID times – with a livestream you’ve never seen before: “We really hope it continues, so we can keep going.”

READ: Midnight Mafia is bringing the best of the harder styles to Australia yet again

HSU – short for Harder Styles United – has a huge reputation in Australia. For the non-Aussies among us: their events, such as Knockout Circuz and Midnight Mafia, are compared with Qlimax as the equivalent in the land Down Under. You can expect incredible shows and beautiful stages, with artists such as Project One, Radical Redemption, Sefa and even Showtek (with their one and only full hardstyle performance in almost 10 years). Result: the events of HSU sell out within 30 minutes or less due to high demand.

“HSU has a very small unit of amazing staff, so I basically told them we will get through this and everyone’s job was safe.”

And then there was a global pandemic, which put a massive break on the entire world. “We had just finished one of our new events called “Summer Gathering” headlined by Sefa, Tweekacore and Minus the Crown”, remembers Pete like it was yesterday. “It was a hybrid party of HTID (Hardcore Till I Die) as we had to do an event with a concert style run time, instead of a normal full length HTID. This was the result of the festival guidelines imposed by our state government.” 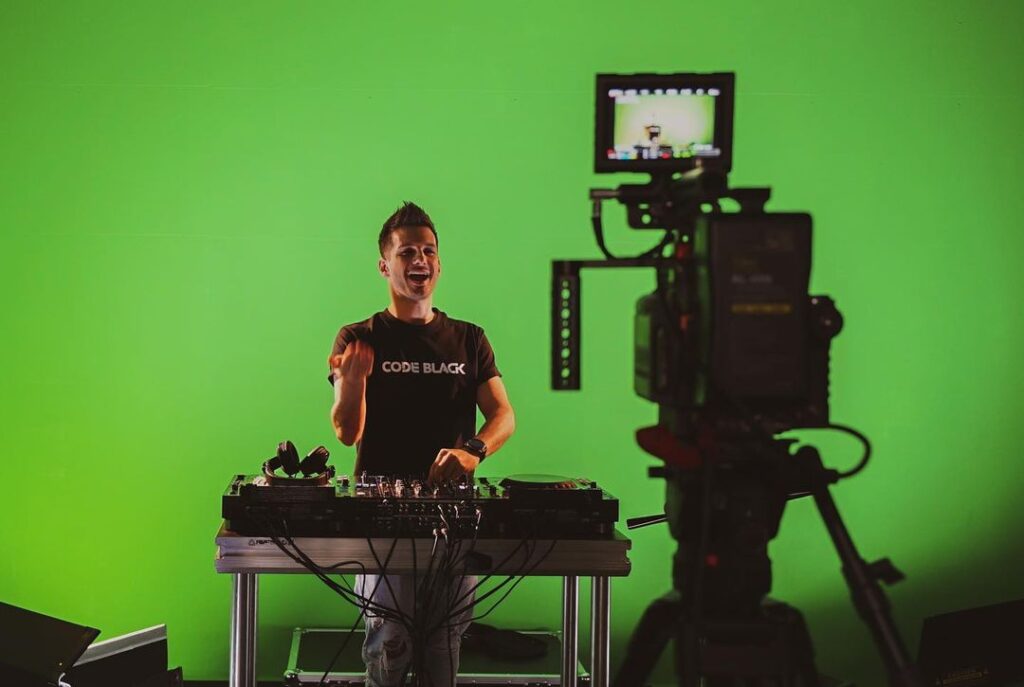 Because the Australian festival scene was already struggling, since the government had already pulled the plug on Defqon.1 Australia. But HSU kept going: “Midnight Mafia then went on sale, sold out very quickly and then ‘boom’: COVID. The company then was in this freeze/waiting period that the whole world was experiencing. HSU has a very small unit of amazing staff, so I basically told them we will get through this and everyone’s job was safe. It’s been a very rough ride: constant changes, COVID case outbreaks and never knowing when we can operate again. Right now as of today things are looking very promising and HSU has just booked two shows for later in the year – with dancefloors!”

‘Oceans apart, but still able to connect with music through a virtual world’

HSU decided to create something huge in these weird times. “To be honest, it came out of desperation to doing something current or be relevant in this weird period, and not rely on older content. My business partner Rob had already been streaming on his own with his artist alias Weaver, and he suggested looking into Twitch. At the time I had little to no experience using the platform. Then I had very huge brainstorm with our video creative Wissam (an Australian Director & Film Maker living in Amsterdam, who worked with Armin van Buuren and Tomorrowland too) and the cross over potential was right up our alley.” That’s where it all started for HSU LIVE…

It involved a lot of Skype and Zoom meetings, since it’s not possible to take a 24 hours flight from Sydney to the capitol of Amsterdam. “After a week or two in deep discussion, Wissam and I came up with the concept of streaming live from Amsterdam and letting “Amsterdam come to Australia”. Essentially: HSU LIVE. Seeing as I actually wasn’t in The Netherlands, it was then up to Wissam and his team to create the platform, virtual environments and deliver the whole concept off. Wissam actually created an entire studio to deliver the stream weekly, so it was a massive undertaking. We do feel that the success has come from the HSU teams collective effort to evolve.”

Wissam: “On our streams EVERYTHING is done live”

A huge challenge, since it involves a lot of corona restrictions and everything you see is live. Yes, including all the lasers, virtual fireworks and cameras, to make it as real as possible. Creative Director Wissam says: “The unique thing about this crisis is that for a whole year now things have stayed the same. Week in, week out, nothing changes. We’re still limited in our movements and there’s no real light at the end of the tunnel as far as the entertainment industry.”

Wissam and his crew are responsible for the production in Amsterdam every week. “So what we wanted to do for our community was to give them something to look forward to every week but that necessitated that we build our own studio. It took thousands of man hours to build the studio and to develop the virtual festival technique (which we built and developed from scratch) as well as creating a whole new business around it called MASSIVV Streams. At the moment there are only a few companies out there able to deliver these virtual world streams and even fewer willing to do them LIVE and not pre-recorded.”

Something which Wissam and the rest are really proud of: “What I loved the most about this project other than the obvious fact that we were able to help our community stay entertained during these rough times was that It also helped get us, as creative crew, through this crisis as well. We love putting on shows for people.”

It resulted in an average of almost 20.000 unique viewers per show, who tune in for livesets from more than 30 artists such as Brennan Heart, Ran-D, Angerfist, Warface, D-Sturb and many others on a weekly basis. All brought to you by the host Audiofreq and every broadcast is concluded with a podcast, where you’ll hear things you’ve never heard before about the performing artists. 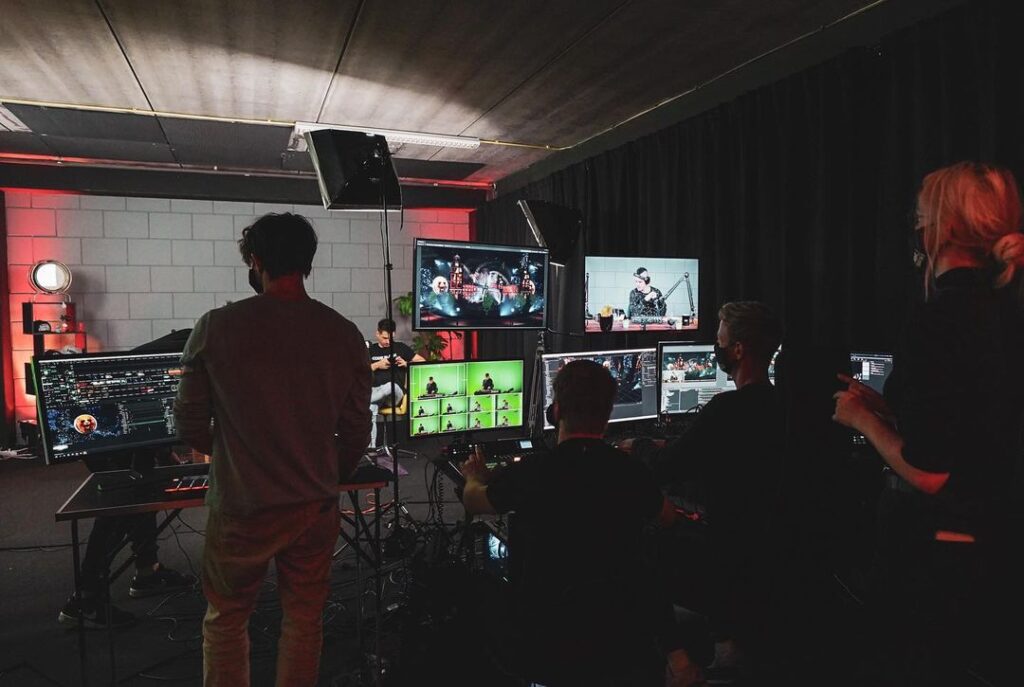 Although it’s just 11:00 in the morning for Europeans (HSU LIVE begins at 21:00 Australian time to start the weekend with a party), the broadcasts are being watched all over the globe. “The stream (while it’s targeted to the Australian market) has seen big involvement from people all over the world. I think because it’s a fresh experience, artists play new music and also talk in the podcast section so you can get an insight into the artists as person kinda like Joe Rogan’s podcasts”, Pete explains.

Chance of winning the Diamond ticket – a lifetime free access to all HSU Events: “It means the world to everyone at HSU”

HSU LIVE is being broadcasted on Twitch, which has been used worldwide massively for good reasons. “The stream doesn’t have a music policy: it’s just got to be hard dance music so it’s politics free.” Most livestreams on YouTube and especially Facebook experience extreme difficulties. But most importantly, Twitch gives users the option to subscribe to a channel for a small fee per month. It’s a great way to provide support for the streamer and it gives you extra perks in return. Also, HSU has been giving away the highly wanted Diamond Tickets to those who donate a substantial amount of subscriptions. It gives you the right to visit all HSU Events for free for the rest of your life.

Because a weekly livestream from a professional studio costs a lot of money, so every form of support is welcome. “This is one of many things we have learned in hindsight on Twitch. Our goal was to create a quality stream every week and get consistent. It’s actually very expensive to keep it going as it’s all done in Amsterdam and involves over 10 people each week. HSU really needs the support as it’s getting to the point of not being financially viable anymore”, Pete admits.

“We have seen amazing support via Subs in the last few weeks and we really hope it continues, so we can keep the stream going. I’d like to take this opportunity to thank everyone who has subscribed so far, it means the world to everyone at HSU.” At least for now, HSU LIVE has a few more liveshows planned. “At the moment the plan is to continue on into April, to be honest it depends on how many subscriptions we hit in the drive and if more sponsors jump on board. We have Wildstylez with MC Villian, Sefa and Act of Rage to come this month, so it’s a really insane line up yet to come.”

Interview with HSU: ‘Midnight Mafia later this year, plus another 3 shows lined up’

Meanwhile, HSU has been planning a lot to give the people what they do best: throwing events. “We have 3 shows lined up outside of Midnight Mafia later in the year, we honestly can’t wait! A big thank you to everyone that keeps tuning in each week. Especially those that are subscribing. I’d also like to thank LastBlast (Bart & Jordy) and all the artists that have supported us by giving up their time and participating in the stream during COVID. I would also like to say a big thank you to Sam (Audiofreq) for being a host with the most each week. Lastly, my HSU team who continue to give their best for the organization every week!”

If you have missed one of the many sets from your favorite harder styles artists, good news! HSU has just uploaded lots of livesets to their YouTube channel. The next HSU LIVE will take place this Friday at 11:00 CET (which is 21:00 AEDT for the Aussies), with Wildstylez, Villain and a classics set from Audiofreq on Twitch. To those who can’t make it: the livestream will be re-broadcasted at 21:00 CET (which is 13:00 PDT in California).

Midnight Mafia 2020 will be rescheduled due to coronavirus

After QAPITAL being cancelled just yesterday, now another big event had to take measures due to the spreading coronavirus. The Australian spectacle Midnight Mafia 2020, which was…

HSU Events has just revealed the full line-up for the upcoming edition of Midnight Mafia at the Sydney Showground, which will be transformed into the ‘City of…

The organisation HSU – Harder Styles United Events comes out with a brand new concept in December: EPIK Sydney. The names of the line-up had been revealed…