These artists will drop brand new music during Shockerz

In two days the time has come for another grand edition of Shockerz. During the upcoming ‘Chaos Complete’ event, the DJs will deliver a true raw spectacle in Den Bosch’s Autotron. The playing artists have been busy and spend quite some time in the studio to present new tracks during their set. We’ve listed some projects for you which will be heard for the very first time this Saturday at Shockerz.

None less than MYST has the honor to play the very first set of the day and will welcome the visitors in area 1. During his playtime, he’ll premiere several new tracks: “Shockerz this weekend! Playing loads of news tunes”, the producer shared in his Instagram Story.

Bloodlust: “I’ve worked my ass off to make this my best set ever”

On Saturday, Bloodlust will celebrate the debut of his live act. In a live stream on social media, the DJ said when he got asked to do a live set on Shockerz’ mainstage, he had just 3 songs released. In order to be able to play a set with 100% Bloodlust tracks, “he worked his ass off” in the last time and finished a very impressive amount of 8 new tracks. Furthermore, visitors can look forward to live edits as well as special visuals during his set. “I have dedicated my entire life to make this my best performance I have ever done.” 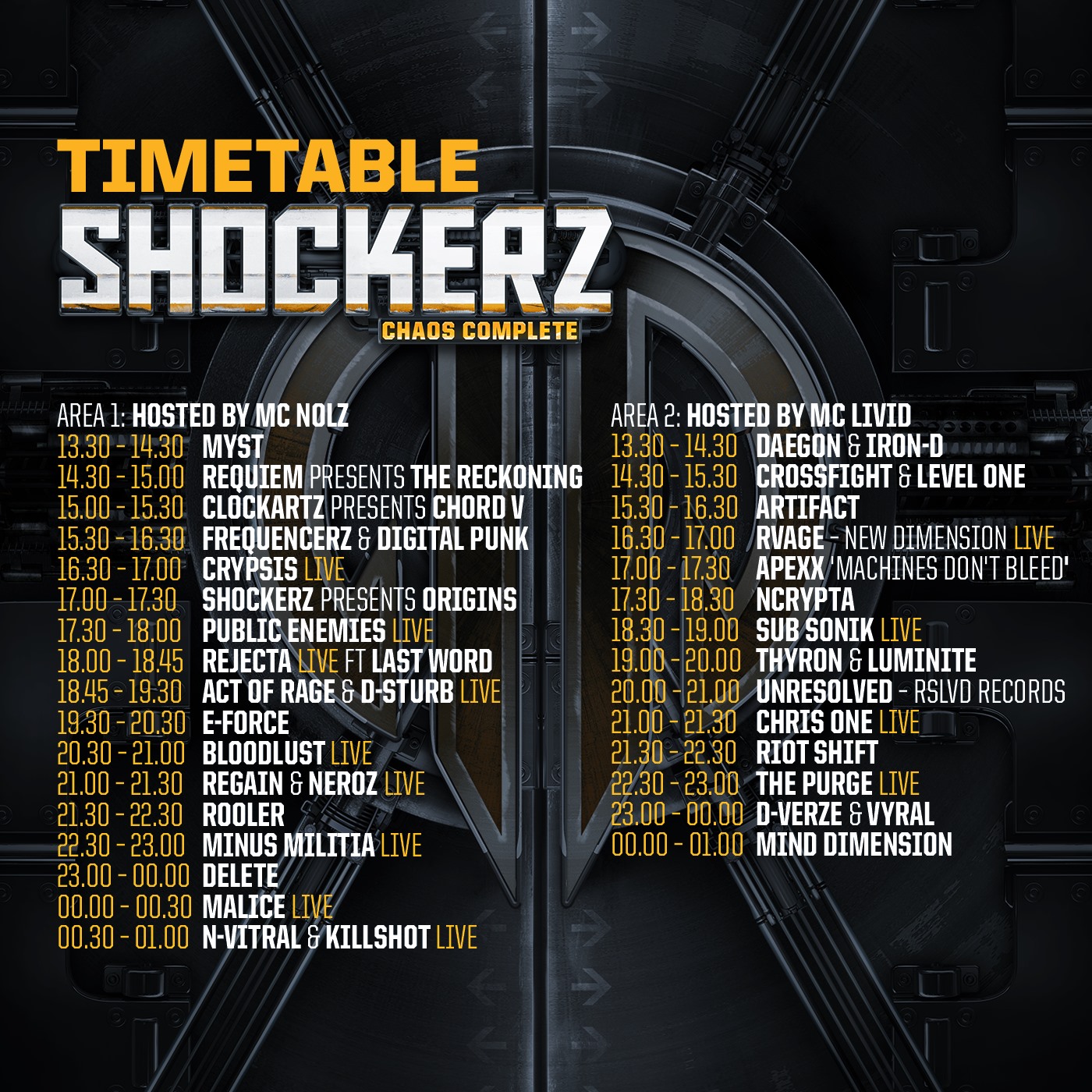 D-Sturb & Act of Rage get ready for their vs set

Also during D-Sturb & Act of Rage’s set, visitors can expect to hear new music. Both men were already responsible for Shockerz anthems in the past and on Saturday, they’ll stand behind the DJ desk for a vs set. Via their socials, they showed themselves together in the studio preparing for the upcoming Chaos Complete edition. Additionally, D-Sturb’s album Synchronised will be released one day prior the event.

Public Enemies, consisting of Digital Punk and Hard Driver, will premiere a brand new track, too: “Who is ready for a new Public Enemies track? We droppin’ it at Shockerz this Saturday!”

Minus Militia has been added to line-up as a surprise act and considering Shockerz is one of their few performances, fans can hope to hear new music. Recently the DJ formation posted a video on Instagram with the caption: “Coming soon #Riotmusic”…

The unique combination of Killshot and N-Vitral has the honor to close down area 1. For their set, the two men come with a collab called ‘We Raise Hell’, which will be heard for the very first time on Saturday in the Autotron.

Chris One: “Finished 2 live edits just in time for Shockerz”

During Chris One’s live set, 2 brand new edits will be blasting through the speakers, but which tracks got the “VIP treatment” isn’t announced. Furthermore, fans can expect to hear an updated version of his new collab ‘Drop The Bomb’ with The Purge.

For his RSLVD Records set, Unresolved had arranged a collab: “Tomorrow collab day for Shockerz”, he published in his Story yesterday. Therefore fans can look forward to hear freshly produced track during the set of the Italian DJ.

Artifact: “Get ready for a lot of new stuff”

Also Artifact will bring new sounds to area 2. There’s a collab with Chain Reaction in the making, but if this one will be featured in his set, isn’t known yet. “Get ready for a lot of new stuff”, the End of Line member announced.

Crossfight has a new track to show

“Who wants to hear a teaser of a new Crossfight track tonight?”, the producer asked in his Instagram Story. Therefore it’s imaginable he’ll play this new production during his Shockerz set.

The Purge has finished his track ‘Lose Control’ with MC Livid and will drop it during his live set on Saturday. Furthermore, he has a lot of new edits ready and possibly he’ll also play the new version of his collab with Chris One: “Best The Purge set on the way!” 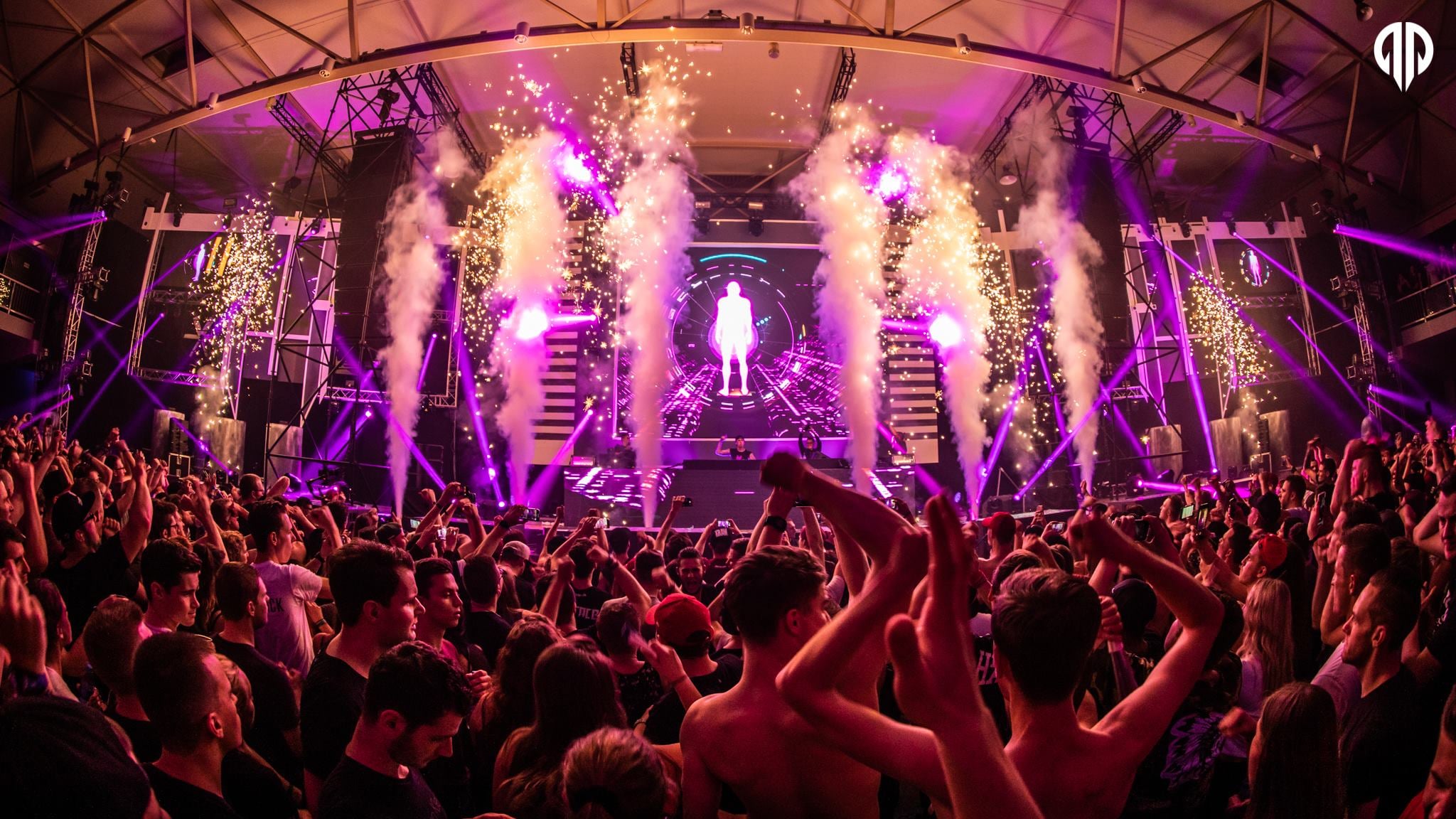 Yesterday, D-Verze released his track ‘Unconditional’ and thanked his fans for the support on his socials. “It’s only track 1 of the album. Working really, really hard to have a lot more finished on Saturday.” Also Infirium states to finish their collab, so his label colleague can play it his vs-set with Vyral.

After RVAGE played 4 new live edits last Saturday, he asked for a live edit suggestion for his upcoming album LIVE showcase: “Shockerz is around the corner so tell me of which track I have to make a live edit.”

Also Sub Sonik won’t come with empty hands and will premiere a never heard production during his live set. Besides his weekend schedule, the DJ revealed in his Instagram Story: “P.S. Gonna play a new solo track.”

Shockerz – Chaos Complete will take place in the Autotron in Den Bosch on Saturday, 14th December 2019. The event is completely sold out, but you can check the official website for further information.

After last year’s success, Shocktoberfest is putting on the lederhosen for thé hardstyle Oktoberfest. With a line-up full of crazy artists, the Maaspoort will once again be…

The last few days the artists of the Shockerz line-up have revealed themselves one by one and now the picture is finally complete. In March, more than…

Vroeger Was Alles Beter looks ahead with the biggest hardstyle legends: “Heroes of Classics”

Vroeger Was Alles Beter is on a roll, especially after the legendary day of yesterday. The concept appears to have big plans for its ‘Heroes of Classics’…