This was the Symphony of Shadows: “Welcome… To Qlimax!”

Last weekend it was finally time for a new edition of Qlimax: the best known indoor event within the harder styles, which guaranties to be a true spectacle every single year. This edition was all about the Symphony of Shadows, during which 11 acts and thousands of visitors united in the GelreDome for an iconic night filled with the best of what hardstyle has to offer. Welcome… to Qlimax 2019!

On Saturday the 23rd November, the 27th (!) edition of Qlimax took place: the successful Q-dance concept that has been winning the hearts of hardstyle lovers for many years now. Not only do ten thousands of visitors unite here, but also the most famous artists within the scene bring their hardest and newest music to this immense hall. Qlimax isn’t the world’s biggest indoor hardstyle event for nothing, so the Symphony of Shadows promised to be one to remember…

Since we of course didn‘t want to miss anything of this evening, we were in Arnhem punctually at 21:00. Many others thought the same however, so getting in took quite a bit. But, after some lines the moment was finally there, and we were able to enter the stadium. For me personally, this remains to be the most beautiful moment at an event in this location, because of the impressive feeling when you feast your eye on the huge GelreDome for the very first time.

Also this year, the middle part of the stage still was hidden with a big white curtain – another thing that makes Qlimax so spectacular. To warm up the audience up for this big opening, Q-dance deployed none less than ‘The Qreator’:

“A mysterious being with an unknown identity has come forth. He is the one who summons the operators that have the knowledge to play the instrument. His power is the pure energy of timeless hardstyle music. Witness this mystery and fuel the night with your Qlimax spirit. This is The Qreator.”

Maybe we will never find out who this masked DJ exactly was, but it was an awesome warm-up – filled to the brim with classics. From ‘So High’ to ‘I See Stars’ and ‘Break Down Low’, the hearts of hardstyle lovers were richly filled here. The hightlight for me definitely was when ‘Lost In Paradise’ was playing and the whole stadium (which was already completely filled!) screamed along – this set the tone for the entire evening.

The moment of… The Qlimax opening

And then it was time for the crème de la crème among openings: the fall of the Qlimax curtain. If you have already visited the event, you know that the GelreDome is immediately filled with thousands of phones – because everyone wants to have a memory of this true true spectacle. Also this time, Q-dance went all out and a big “wow” echoed from the audience. Goosebumps incoming: “Welcome… To Qlimax!”

The honor of playing the very first (recognizable) set of the evening was given to none other than KELTEK. With his euphoric beautiful tracks he surely showed that he more than deserved his first performance at Qlimax – in this solo set-up. His set proved this as well with tracks like ‘Oblivion’ and ‘One Tribe’, which also the visitors seemed to appreciate very much. After this it was up to the duo Sound Rush, who announced their first album with an enormous amount of new music like ‘Brothers’. This set was really enjoyable, and as icing on the cake they even played the golden oldie ‘Like Thiz’.

“It’s time to gather all disciples, to create the Symphony of Sounds”

Meanwhile, we got to see more of the stage: a design receiving different opinions, which I both can understand. I surely also missed the moving elements – something that makes such a big event like Qlimax so unique – but no one can deny the stage looked magnificent once again and reflected the dark theme very well. The GelreDome also didn’t miss out on fireworks, which we got to see during the anthem show after Sound Rush. Here we were able to enjoy a high quality Q-dance show, supported by B-Front’s anthem ‘Symphony of Shadow’. Goosebumps! 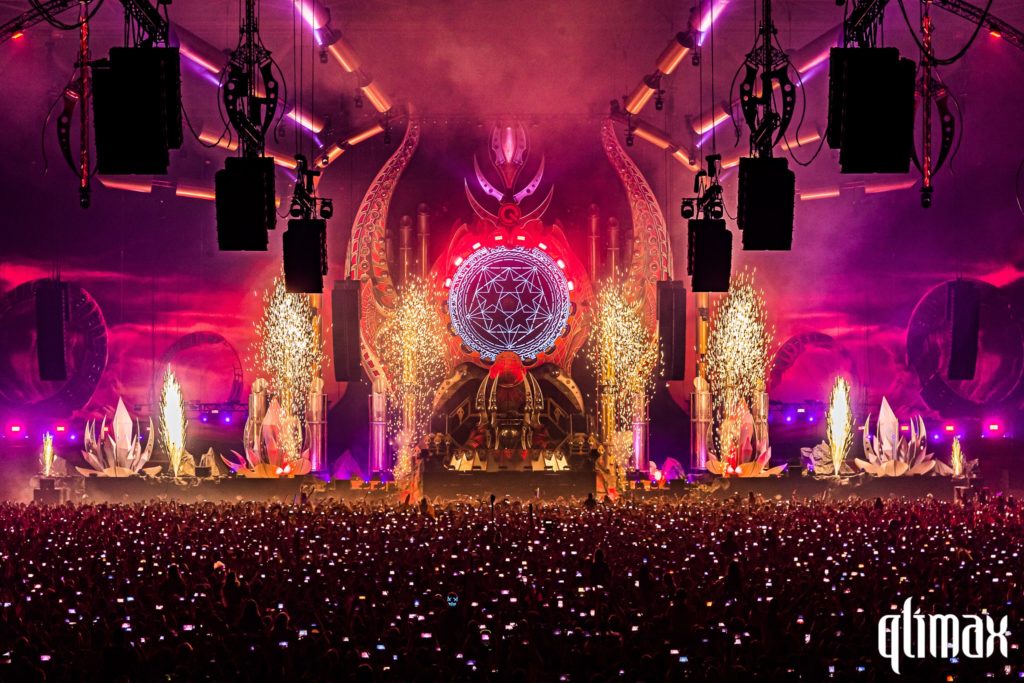 None other than Ghost Stories’ legends D-Block & S-te-Fan were next in line to enter the DJ booth… And this set was great, also because DBSTF sound fits the dark and mysterious Qlimax vibe perfectly. Tracks such as ‘Twilight Zone’ and ‘Ghost Stories’ of course couldn’t be missed, but the highlight had to be during ‘Darkest Hour Of The Clock’: during this the entire GelreDome waved along from left to right.

“This music… Is our destiny!”

Next up was the one and only Headhunterz, who returned to the Qlimax spectacle after 5 years of absence. As expected his ‘Orange Heart’ showed up, and the beautiful ‘Destiny’ and ‘Our Church’ were blasted through the speakers. Also the lightshow supporting this set was epic, and definitely worth a visit to the tribunes. This is where you’ll truly be able to enjoy the complete experience that is Qlimax.

After this it was time for the man of the night to claim his place behind the decks: B-Front! This set was absolutely great and the atmosphere was amazing, which is no surprise with tracks like ‘Cats, Jets & Breaks’ and ‘Touch A Star’ being blasted through the speakers. Halfway into his set things even got more special, since none other than Phuture Noize joined the anthem maker on stage. Together they played their collabs ‘Beautiful Fantasy’ and ‘The Solution’, but for me the true highlight was when the ‘Smells Like Teen Spirit’ bootleg echoed through the GelreDome – this record is so epic!

Next up, Ran-D brought his We Rule The Night to the Qlimax stage, a set in which both new tracks of the album and well-known hits such as ‘Antidote’, Power of Now’ and ‘Run From Reality’ were flying left right and center. To me Ran-D is the absolute hero and he never disappoints, which he once again proved last Saturday. On top of all of that, I also should mention the artists looking iconic during the enitre eveing; dressed completely in the Qlimax vibe they truly made picture perfect.

The follow-up of this great set was D-Sturb’s debute on the Qlimax stage. A long-awaited debute when I listened to the audience – because this man had a great response. Everyone went completely wild at the hard ‘Universe’, ‘Synchronised’, ‘Let The Games Begin’ and of course ‘Attention’. With this set he also created the perfect transition between the hardstyle and raw hardstyle genre. And with this it was time for the next Qlimax debute: Rejecta!

One Qlimax debute after the other

This man has made his way to the top of the scene in a very short amount of time with his catchy melodies and great kicks, which he also blasted through the GelreDome last weekend. The set was amazing with the well-known ‘Move My Body’, ‘Rise of Rejecta’, ‘Followed’ and as icing on the cake the brand new Shockerz (and very first Rejecta) anthem ‘Chaos Complete’. After a half hour of enjoyment, Radical Redemption filled up the hour with his well deserved (!) Qlimax debute. From ‘America’ to ‘20.000 Volts’ and ‘Hannibal’: Radical lovers surely loved this. 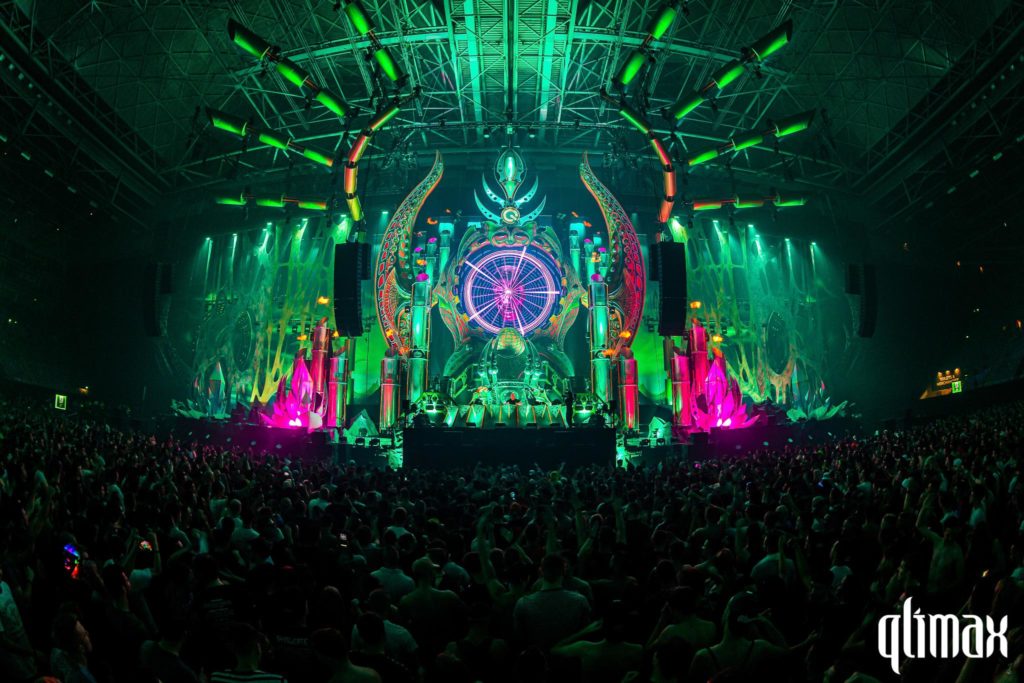 Before we knew it the Qlimax night had almost ended… Such a shame, but lucikly we still had Miss K8 who made us dance out our very last energy. She started out with her new ‘Elevate‘, followed by bangers ‘Raiders Of Rampage’, ‘Bogotá’, ‘Out Of The Frame’ and as absolute closer ‘Battlefield’. This really was a great closing, supported by a grand show and BPM.

And there you have it. Qlimax gave us one night completely filled with show spectacle, great sets and a unique atmosphere – during which the Symphony of Shadows theme showed in every single detail. Q-dance once again proved why this is the place to be for hardstyle lovers, and why this event should always be in your party agenda!

Thank you for being part of this ancient ritual. May the shadows guide your light forever. This was Qlimax 2019 – Symphony of Shadows.