The career of A-RIZE is taking off: even before the release of ‘Faith Of The Saint’ today, Headhunterz (among others) already labeled his debut as a hit within the hardstyle scene. A lot of eyes are on this young talent, so we spoke to Carlos about his starting career as a DJ and producer. “I don’t need expensive stuff or 1 million followers. It’s about being able to have a positive impact on other people’s lives, while I can do my favorite activity.”

READ: Last of Us: “We did not expect that Art of Creation would turn out so big”

The story of A-RIZE, one of the three new additions to Art of Creation: Eternity, is one that many beginning artists dream of. It started during a Twitch stream of Headhunterz, where he was checking out several demos. From the moment A-RIZE’s track was about to start, it seemed like the chat exploded – including an enthusiastic Headhunterz.

A-RIZE: “I don’t make your average hardstyle music, but music with a lot of depth and story and I knew that Headhunterz likes that too”

“I had sent two demos, after which I was spontaneously spammed on Discord, when Headhunterz sent a message in the Xense server about listening to demos”, A-RIZE recalls. “This also caught Willem’s attention and immediately set his expectations high. So I ended up sending two records, but with a lot of luck ‘Faith Of The Saint’ (the best of the two) was randomly selected to get on the stream. Willem listened to the record and my heart raced unbelievably.”

It’s already an unforgettable moment in A-RIZE’s just-started career. “I’ve been waiting for this moment for years: Headhunterz is finally listening to my music. Deep down, I knew this was what I needed to be understood by someone. I don’t make your average hardstyle music, but music with a lot of depth and story and I knew that this is totally Headhunterz his game too, but I didn’t expect his reaction. He was impressed and even said: ‘Where can I sign?’ When I got all this, I wasn’t really sure what to feel. It was a lot at once.”

From listening to a demo, to a premiere at Defqon.1 at Home and a spot at Art of Creation: Eternity

From this moment on, it suddenly went very fast for the DJ from the south of the Netherlands. “After Willem asked if I had signed somewhere and my answer was no, the entire Headhunterz discord server went wild. At one point everyone sent ‘Sign Carlos!’ into the main channel of the server and started tagging me. Little did I know that this was the start of a very nice road to wherever it will lead. It feels like a huge honor”, A-RIZE says. “To be chosen by Headhunterz to start your career under the wing of the legendary trio is of course something that no youngster like me actually expects.” Result in just a few months: a premiere for thousands of viewers during Defqon.1 at Home and the very first release of A-RIZE on the new label.

A-RIZE was an unknown name to many people, but the quality of ‘Faith of the Saint’ is top notch. “I was introduced to hardstyle by my brother. It was 2010/2011 I think and he played it all day long. I was about nine years old myself and the first few times I heard it I thought: ‘What is this for weird bouncing ball music?” I initially thought the kicks were a little crazy. But just like one has to learn to drink coffee, I eventually did this with hardstyle and started to love the genre myself.”

In the footsteps of inspirator Headhunterz

The quality of ‘Faith Of The Saint’ is high: many fans even thought that this was a new track by Willem. “I’m a Willem-inspired producer named A-RIZE. It seemed a little too good to be true at first when I heard the lyrics, but precisely because I got so attached to it, the production process went like I was walking. Everything worked and everything was right. Every idea immediately connected.” 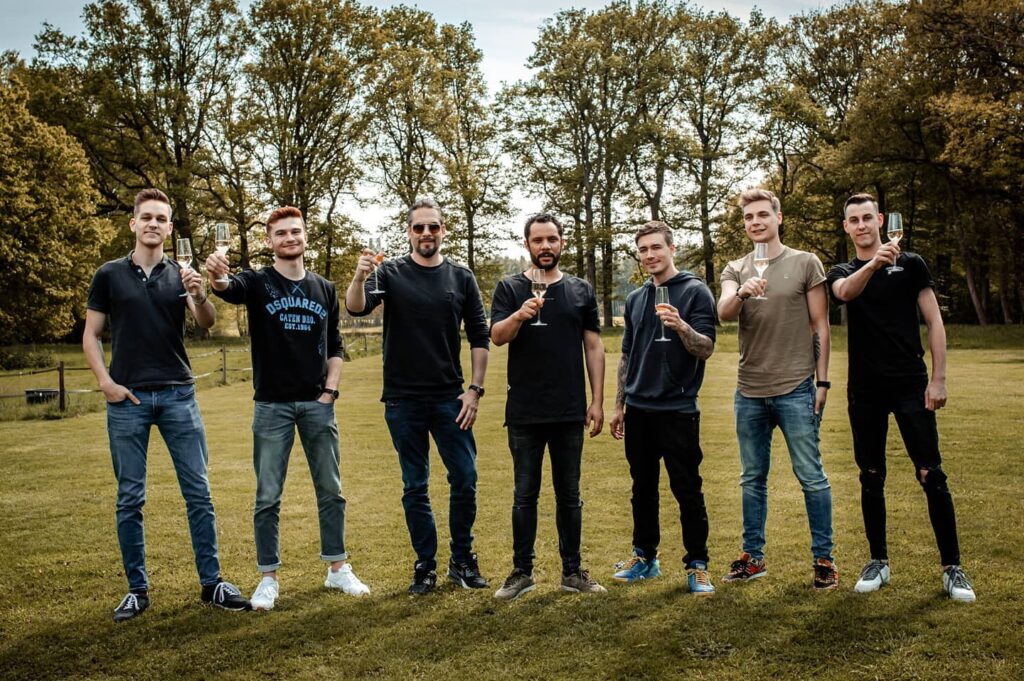 We notice that there is a certain vision behind the productions of the only 20-year-old producer. “With this record I really tried to create a special moment, where we can enjoy the atmosphere of the past again. Hence an arrangement – that is not really the obvious arrangement of a contemporary hardstyle record. By arranging this way, it has a lot more attention for the feel of the melody and the dark atmosphere of the vocal.”

“I don’t need expensive stuff, 1 million followers, etc. It’s about being able to have a positive impact on other people’s lives while doing my favorite activity. I couldn’t be happier than that.”

Now Carlos’ first record on AOC Eternity is a fact. What else will we hear from this youngster? “My plan for the coming years is of course to release a lot of music, but meaningful music. I never want to release a record that does nothing to people and myself. I always want to create a message and create a world in a world. That someone out of the hardstyle family can say: ‘His music has really helped me and brought joy to my life.’ That to me is the sign that my biggest goal has been achieved: I don’t need expensive stuff, 1 million followers etc. For me, it’s about being able to have a positive impact on other people’s lives while doing my favorite activity. I couldn’t be happier than that.”

‘Faith Of The Saint’ can be heard from today on the well-known Art of Creation channels. Follow A-RIZE on Instagram to keep up with his career. “This is just the start. Together we will rise!”