Could it be true, is Project One back?

When people started talking about a possible performance of Project One all the alarms at the office started to go off. The whole building was evacuated and they even called for medical assistance to calm people down. Would it really be true? And where do these rumours come from?

Let me begin with the beginning. On April 26 a new edition of Tijdmachine, which translates to Time Machine, will take place. This event is known for booking big artists to fill the night with the best of Early Hardstyle (hence the ‘Time Machine name). At the end of 2014 they even successfully revived Bioweapon for a gig together.

While that was a great achievement on its own, Project One is something else entirely. This legendary act, consisting of Headhunterz & Wildstylez, released an album back in 2008 which is still considered to be the best Hardstyle album of all-time. Many fans will undoubtedly acknowledge that. The act has had only a handful of gigs between 2008 and 2010, ending their project in style at X-Qlusive Headhunterz. Things became rather quiet after that, until 2013 when the act made a surprise appearance during X-Qlusive Wildstylez. But after that Project One seemed no more.

Project One at Tijdmachine?
Anyway, let’s get back to Tijdmachine because where do those rumours come from? As I said before a new edition of Tijdmachine will take place on April 26, during Kingsnight, in Amsterdam. Even though Tijdmachine is known for its Early Hardstyle that doesn’t necessarily mean Project One will be there. But the poster they made for the organization is quite remarkable. All visible characters on the posters have black bars in front of their eyes. Why on earth would they do such a thing? What a coincidence that Project One also has those black bars! 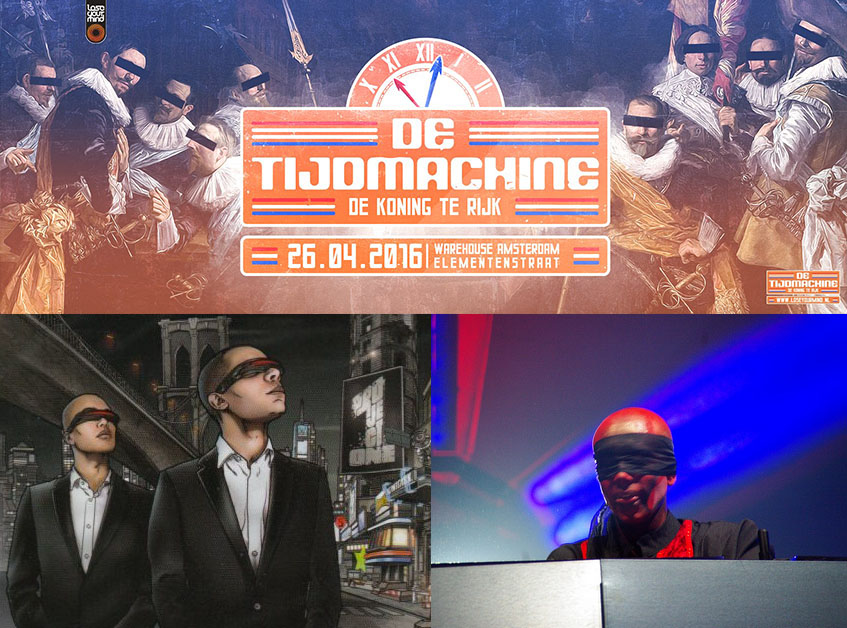 Are you starting to get excited already? But of course that’s not all. Besides those carefully placed black bars there are more things that Lose Your Mind, the promoter behind Tijdmachine, uses to tease us.

“PROJECT …”
In the Facebook event of Tijdmachine ‘De Koning te Rijk’ the organization suddenly posted a video of Wildstylez at the last edition of Tijdmachine with only the word “PROJECT …” in the description. They sure know how to get people on the edge of their seats. Then Lose Your Mind decided to answer some questions about the event online. Somebody asked why the organization chose to host the event during Kingsnight (the night before our King’s birthday) and they said the following: “Most big names are available on those days because it’s during a weekday and it’s a typical Dutch festivity. That means most big names are already in The Netherlands instead of touring around the world.”

Would this mean that Lose Your Mind has had the opportunity to book a special act that otherwise wouldn’t be in The Netherlands? All aboard the hype-train! But there’s more, because to spice things up a bit Wildstylez posted a picture a few days ago about his X-Qlusive in 2013. The picture shows him together on-stage with Noisecontrollers and Headhunterz. The head of Lose Your Mind comments the following below the picture: “If only you had a time machine…”, to which Wildstylez responded by laughing.

Would I love to say that Project One will perform on April 26? YES! Is it in my power to fully confirm it? No.. But it’s always nice to keep dreaming and it certainly isn’t impossible. The ticket sales for Tijdmachine start at Februari 1 and the organization has already announced to reveal the line-up before the start of the ticket sales.

“All aboard the hype-train!”