Digital Punk: “I am so proud of the fact Unleashed is a part of Roughstate now”

A few weeks ago, Digital Punk announced he would pull the plug from Unleashed Records, his own record label. From now on, Digital Punk together with his Unleashed Podcast, will officially be a part of the Roughstate team. The preparty at REBiRTH Festival was the very first time Digital Punk performed together with Roughstate, and we spoke to René about the big changes in his career.

Many people know Digital Punk from his Unleashed Podcasts. The podcasts includes the newest and hardest hardstyle tracks every month, but from now on the man himself and the podcasts will be a part of Roughstate. “At first, I would like to say that I am really proud of the fact Unleashed is a part of Roughstate now. These two big brands will really reinforce each other”, explains René.

There are a few things that are going to change because of this switch. “From now on, the podcast will be called ‘Digital Punk presents: Unleashed – Powered By Roughstate’. Also the design of the artwork and the jingles in the show will change. Because of the terrible news that the Unleashed voice ‘Chris Corley’ has died, we also had to look for another voice. Besides that, there is a whole team of Roughstate artists that will presents the newest productions exclusively in the podcast.” 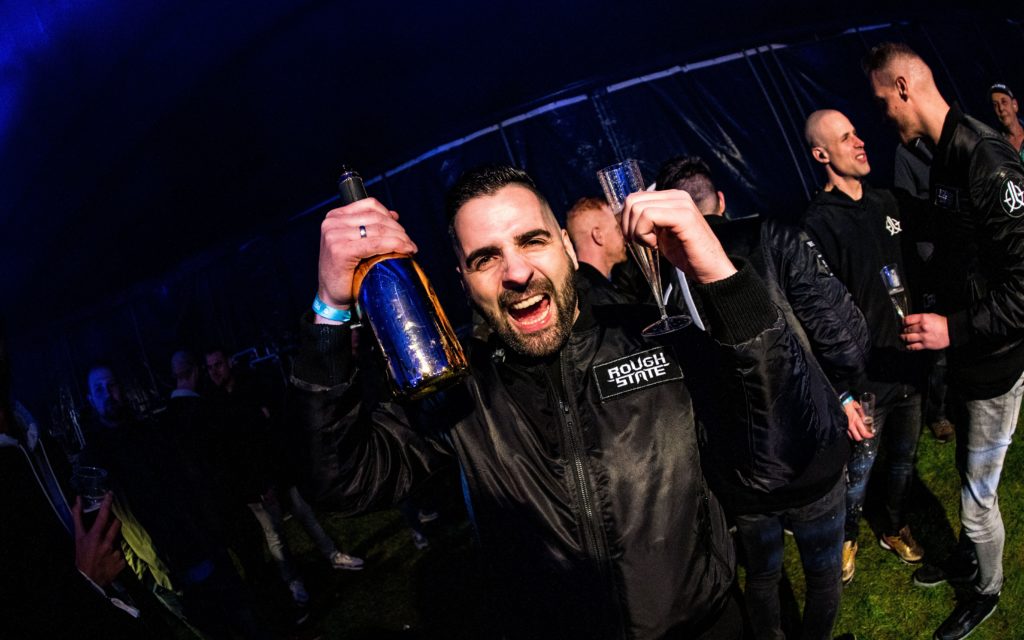 In the meantime the Unleashed Podcast has no less than 74 episodes, which is quite an achievement. “I was hoping it would be a success, but I didn’t expect it to be that big. Where ever I go over the world, 9 out of 10 times my fans will start the conversation with Unleashed! Thats amazing and the reason why I keep doing this!”, according to Digital Punk. He also had a very successful label, Unleashed Records. Previously, he already announced he would pull the plug from this label, and we asked René why. “I had a great time with the label. We had 50 releases and 3 albums with millions of streams, but I wanted to do something else. I wanted to become part of a bigger team of artists, who have the same caliber as I have.”

“I’ve already planned collabs with all artists of the label”

That bigger team of artists is none other than Roughstate. Roughstate consists of Frequencerz, B-Front, Adaro and Ran-D, and later Rejecta has also been added to the team. These artists are not only colleagues, they are also good friends of Digital Punk. “When they found out I maybe wanted to switch to Roughstate, they were already convinced I had to come! Whatever happens, it gave me a good feeling since they are all good friends and I’ve known them for a very long time.” René has already planned collabs with all artists of the label, and he is participating in the hostings of Roughstate.

We asked Digital Punk if he has plans to guide other artists and cooperate with the second label Rough Recruits: “I have a lot ambition to guide. I am even already working on it ‘as we speak’. I guide a talents duo, but more about this will follow later.”

“I also have a big project planned for Public Enemies”

In addition to the major steps in his career, Digital Punk has much more to offer us. “I finished 3 tracks with Radical Redemption besides my own solo productions: ‘Kick Op Je Bek’, ‘Colla Domina’ and ‘Righteous Protest’. Furthermore, there are several other collabs planned, for example one with Ncrypta. But that’s not all: we are working on a big project for Public Enemies as well, but more info on this later…”

It is certain we can expect a lot from Digital Punk in the future. You can find Digital Punk at events such as Supersized Kingsday Festival, Phoenix Festival and Emporium Festival. Keep an eye on his socials to be kept up to date.

Public Enemies are back and will come out with a new album: ‘Strength in Numbers’

After a short break Public Enemies are back again: new music, a new sound and even a new look. As icing on the cake the duo will…

Radical Redemption and Digital Punk have not one, not two, but a good three collabs ready for us. After earlier successful collaborations, the men have spent quite…

Digital Punk is coming with a brand new album: Fragments

The word is out. After weeks of teasing, Digital Punk has just announced he’s coming with lots of new music very soon. This means, by next month,…