Rebelion presents Overdose: “An all out, no boundaries live act”

Last weekend the raw spectacle Supremacy once again made its way to the Brabanthallen, during which you were able to enjoy loads and loads of live sets. Among them was the duo Rebelion, who introduced their act ‘Rebelion presents Overdose’ for the very first time. We talked to the men about what we may expect from this brand new concept and what awaits us in the future.

Rebelion presents Overdose is a new live act concept by the two men Raymond and Gary. Through this act, they will explore the roughest side of Rebelion. “It’s an all out, no boundaries live act. With unique plot twisting edits and brand new solo tracks, this is something that can’t be missed.” But, it’s not only about the music as this performance also comes with its unique visual show and eye catching outfits.

“The edits will remain 100% exclusive for Rebelion presents Overdose”

The men from Rebelion wanted to bring intense visuals to create a feeling of being in another world. “Something that’s very unusual for visuals. We felt that the intro had to be so extreme, to set the tone for what was about to come musically.” What came indeed destroyed the Brabanthallen, which also made the duo very happy about the end result. “We have completely been blown away by the reactions of the premiere, our inbox has literally been on fire with heartwarming responses. We couldn’t have asked for more!” 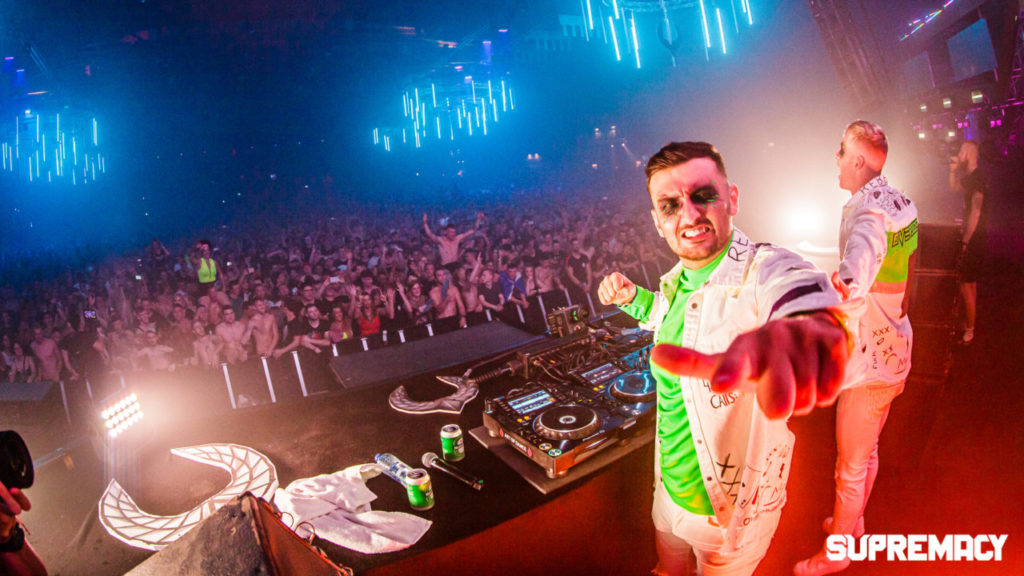 Visitors of Supremacy 2019 also heard a lot of new Rebelion edits leaving the speakers. According to the men, these edits will remain 100% exclusive to the Rebelion presents Overdose sets. “However, this doesn’t mean that in the future we won’t have something special to do with all these edits…” Does this mean a new Rebelion album is on its way? “You should always expect the unexpected when talking about Rebelion! However we want to focus on making great music, and when the time is right we will drop a third album.”

“The real question is what can’t you expect from us”

Back in 2018, they also introduced the live act REBEL[U]TION together with MC Livid, with which they performed at events such as Q-BASE, Defqon.1, Knockout and even released a free album. “REBEL[UT]ION was more experimental in a sense, whereas Overdose is straight to the point! REBEL[UT]ION was also more about remixing mainstream music, and Overdose is more focused on Rebelion – but overdosed.”

According to the men, we can therefore expect many grand things coming from Rebelion in the near future. “The real question is what can’t you expect, we are willing to push the boundaires so far for this live act, not just musically but also visually. ‘You can’t cure us, we’re part of the problem!'”

Rebelion’s Overdose comes with its own event for new album: ‘The First Dose’

The word is finally out there: after months of teasing, Rebelion is finally going to release the Overdose album. In fact, the release will even be celebrated…

Even though you can’t visit events anytime soon, you can still look forward to a lot of new music. In an Instagram Q&A the men from Rebelion…

Rebelion and Sound Rush are coming with a collab

Attentive fans could just read some interesting comments under Sound Rush’s recent Instagram post. Rebelion replied to the question in the caption and by the looks of…