Roughstate starts second label: “Producers will be able to grow on Rough Recruits“

A little over three years ago, Frequencerz, B-Front, Adaro & Ran-D decided to combine their strengths for a new label: Roughstate. Now the men have decided to start another label named Roughstate Recruits. We talked to the gentlemen about Roughstate, the second label and their future plans.

With several albums, releases, hostings and b4b-sets it is safe to say the Roughstate label has accomplished a lot over the last few years. “All the artists and employees have given their all to strengthen the label and to show the outside world what Roughstate stands for. Quality and diversity in the harder side of hardstyle“, so Adaro explains. However, Ran-D adds that the men are not completely satisfied yet. “There is still a lot that can be achieved, we want to expand both at the front and at the back of the label. We believe that the brand Roughstate can still grow on all fronts.“

The label was created at that time because both B-Front and Frequencerz as Adaro and Ran-D were busy with starting a label. Since they were all good friends and their sounds match, they then decided to join forces. Even though all five owners are busy traveling the world for bookings, they know how to run everything smoothly. Frequencerz: “We have a label manager, Pim van der Hoeven, who looks after the daily proceedings. We communicate with him seperately and all together via a Whatsapp group.“ Interesting demo’s they receive are also discussed in the group’s app. “We are being inundated with demo’s, everyone having had FL Studio on their pc for half a year calls himself  producer and sends his demo’s around. But every now and then there is a talent like Rejecta among them, so that’s why we listen to everything carefully“, so Adaro tells. 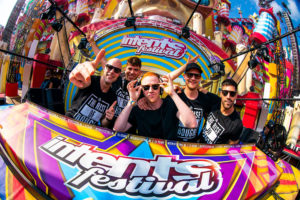 After 3,5 years it is time for Roughstate to take the next step: soon the second label Roughstate Recruits will premiere. “We believe too much is getting released on the mainlabel and want to make a seperation between the main and new label“, so B-Front explains. “We also want to give more talents a chance, and also give them a chance to grow. A talent will release on Rough Recruits first and will have a chance to grow here before he will be releasing on the mainlabel“, Ran-D added. Not just the talents will release on Rough Recruits however, also more well-known names will come out with tracks on the new label. This way, it is clear for the outside world where the mainlabel stands for: the established order and some befriended guest-artists.

The first producer that can be part of the established order is Rejecta. B-Front: “A talent will have to prove himself with a number of strong releases in order to become part of team Roughstate. Rejecta is doing very well in this, but there are upcoming talents sometimes that have a strong debut track and then cannot live up to expectations, for one reason or another. So we will not decide after one strong debut track to keep someone at Roughstate.“ According to Adaro, Rejecta is the perfect example of what a talent needs to do: “He spent years  working on his sound and tracks before he let them hear. Don’t come out with something if it is not good enough yet. This is why his tracks did so amazing in the scene.“ Rejecta is getting help from Frequencerz, they have a deal with him outside of the label. In the future, the men would like to hire more employees in order to help other producers as well. 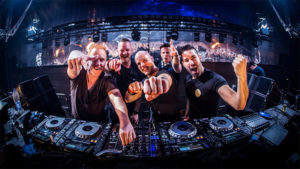 “We would rather have something that sounds less but is original“

Which artists will join the Roughstate Recruits label will be announced soon. However, they can already tell that all types of hardstyle are welcome. “Hardstyle is more open than ever and we are advocates for this. Even though we are known as a label in which melodies play a big role: if someone sends a strong kick-drop track, a super catchy riff or strong vocals, that can be released as well. We do not exclude anything“, so B-Front tells. Adaro confirms: “As long as it’s sick and well produced!“

For the (beginning) producers the men have some advice. Frequencerz: “Don’t be satisfied with your track too soon. Lay it A/B next to a track from your favorite producer and judge fairly if it matches with sound, quality, originality and creativity before yoy go send it around.“ Ran-D adds the label receives many demo’s that sound good, but are either all the same of a copy of another artist. Originality is extremely important: “We would rather have something that sounds less but has something original and creative. Because we can work on the technical part.“ 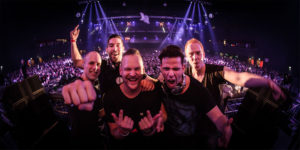 “We are extremely productive in the studio at the moment“

A second label ensures the established order won’t be able to take it easy any time soon. “We will release a lot of music on Roughstate by the main artists. We are extremely productive in the studio at the moment and this will show through albums, EP’s and releases“, so tell the men from Frequencerz. “A very strong release is coming from a new name on the mainlabel, called ‘Going Psycho’.“ They are also still on the lookout for new music on Roughstate Recruits. “So send your demo together with an introduction of yourself to recruits@roughstatemusic.com and maybe you could be our new talent!“

Hardstyle by Roughstate returns to ADE with unique pop-up store

During Amsterdam Dance Event, Roughstate will host their own event again: Hardstyle by Roughstate. After previous year, it’s the second time the label organizes their own party…