Timetable of The Return of Headhunterz is finally online

Yesterday, the official timetable of The Return of Headhunterz at the 30th of September in the Ziggodome was revealed. The line-up was already announced a while ago. With this extra information, the preparations are finally complete. Check out the timetable for next saturday here: 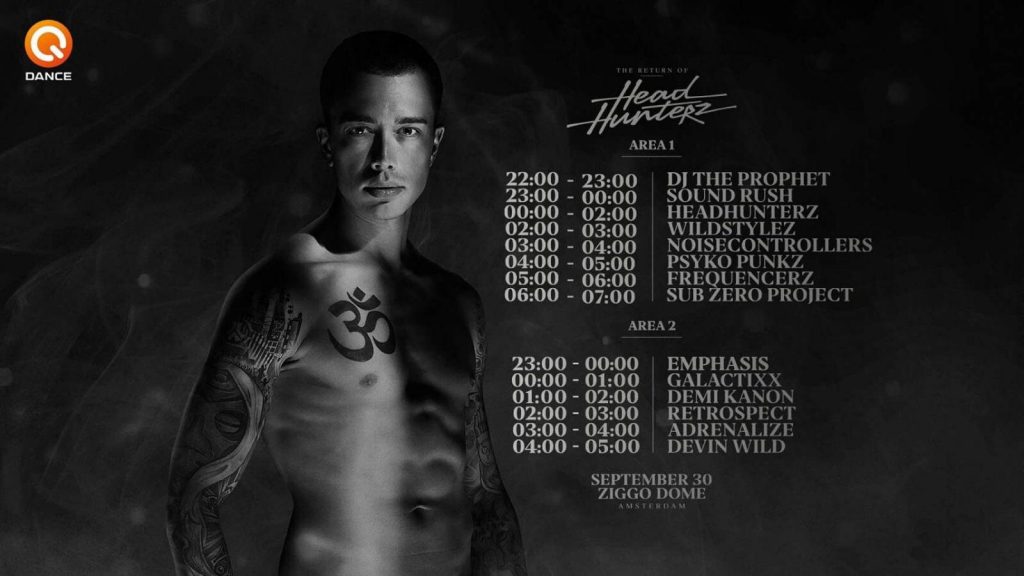 As you may see, there are two different area’s available during The Return of Headhunterz.

Acts in Area 1 include shows of both friends of Headhunterz as other big names in the hardstylescene. The classic hardstyletalent, known as DJ The Prophet, kicks off the party when Sound Rush follows up his set  afterwards. Then, after Sound Rush, the moment where everyone waited for will finally happen. After 3,5 years, since his good-bye message on Facebook, Headhunterz will be performing a two hour long show! Followed by different artists, as Wildstylez, Noisecontrollers and Sub Zero Project who will close down Area 1 with a bang. The stage opens at 22.00 and closes in the early morning around 07.00

Area 2, on the other hand, is fully booked with younger talent. At 23.00 Emphasis opens the gates there. After this, between 00.00 and 02.00, Galactixx and Demi Kanon will perform at an quite unpleasant time. Despite that, these DJ’s will still do their upper best to create an awesome performance. Following are artists as Retrospect, Adrenalize and Devin Wild who will also have a chance to show their qualities. The last named DJ has also been selected to close down Area 2. So, at 05.00 the gates will close again and visitors will have to move to Area 1.

As mentioned before, Headhunterz will perform for two hours. However, it’s still unknown if he’s going completely solo for two hours straight. As we read the timetable, Wildstylez performs directly after Headhunterz his act. So, it could be possible that the two DJ’s unite on stage at the last half hour of Headhunterz his set to perform as Project One together. Perhaps it’s just an coincidence that the DJ’s perform directly after each other, or it could turn out as we mentioned before. Unfortunately, there isn’t much to say about this, since it’s just an speculation. Anyways, let’s find out ourselves this weekend!