This story is all about Mark. In 2013 his life turned upside down when he, after being extremely ill for weeks, was rushed to the hospital with severe pain. He could have never imagined that his life would never be the same. After a CT-scan it became clear that Mark suffered from a malignant tumor in his head.

Mark had just fallen in love with his wife Joyce and they decided to make the best out of the time they might have left together. As a big hardstyle fan they started visiting a party every week, which he enjoyed enormously. He would always be at the front of the stage, banging against the fences. While Mark had a hard time thinking about the fact that he might have to leave her someday, but she insisted on pushing through until the end.

He was a true fighter and kept his head up high each time he visited the hospital with his wife. After the doctors told him that the treatment caught on, he couldn’t be happier. But despite his continuous battle, he received the worst news ever last January. The treatment didn’t catch on anymore and it had only took a turn for the worse. Because of this Mark passed away in September, due to a brain tumor. During his final moments Mark’s wife and friends called out to his biggest heroes and asked them if they would visit him in his sickbed. B-Front, Ran-D, Frequencerz, Adaro and Digital Punk all decided to visit him, to show him their support. 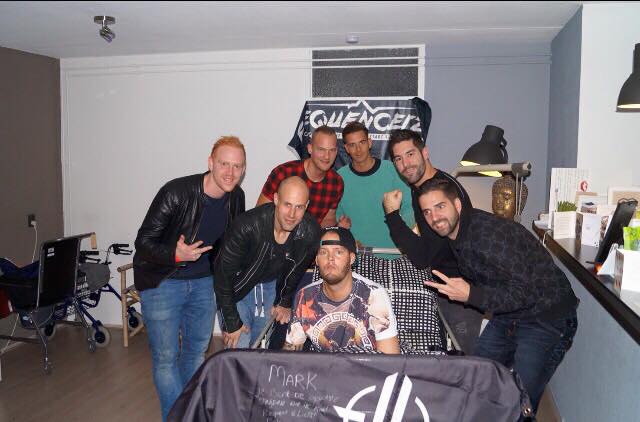 In September Mark decided to go to Dream Village, a festival in Holland, which might turn out to be his last festival. Because of the tumor Mark’s body was very weak and he literally got blown away by the power of the music. But despite that, he always refused to sit in a wheelchair. His wife said the music always gave him the strength to go on.

Rebel to the Grave
After his passing Mark’s friends (Jennifer Christianen and Roy Teesing) and his wife decide to host a special event in his name as a final tribute. Mark had discussed the idea with his friends just before he passed. The event will take place on November 5 in Rotterdam and is called ‘Rebel to the Grave’, after Mark’s favorite track. Of course this track will be played during the night.

Mark’s friends gained massive support from the hardstyle scene and artists like Atmozfears, Ran-D, Digital Punk, Frequencerz, E-Force, Adaro, B-Front, Warface, Jason Payne, Degos & Re-Done have promised to be there to play a set, as a tribute to possibly one of their biggest fans.

With today’s release, Gunz For Hire has acted in high speed and they are showing a hard voice against politics. A Dutch politician labeled the nightlife as…

Gunz For Hire is giving away ‘Toy Soldiers’ for free: “We’re working on a new secret mission”

Gunz For Hire is secretly working on a new project: a new mission with which the most infamous live act in the scene will perform. It concludes…

Adaro hands out remix of Sefa – ‘Calling’ to everyone at home: “A Christmas present for the fans”

After several teasers on his socials, Adaro has finally announced his new release. As of today, his remix of Sefa (‘Calling’) is available for free to everyone,…