Hard Driver about HDNA – The Album: “It perfectly shows what I stand for”

Hard Driver is in excellent form and will release HDNA – The Album this Friday. This will be the fourth solo album by the versatile producer and this one is even better than the previous Chemistry album: “Both albums actually tell one big story from the past two years.”

READ: The Elite about their new album: “5 months of hard work has lead to this moment”

It seems like Hard Driver has more than 24 hours in a day, because the Dirty Workz DJ is extremely productive. This Friday, HDNA will be released, he already released an album with The Elite earlier this year and there was Chemistry less than a year ago.

The CDs were just fresh off the press and then the project planning already started again. “HDNA is the follow up to my previous album Chemistry”, Hard Driver begins to tell. “With the album Chemistry, the goal was to keep the connection between my fans and I strong in strange times without events through music. HDNA stands for the fact that it is finally possible again to enjoy music together in the way it should be – in other words, responding to what is deeply engraved in our H(ardstyle) DNA. Both albums actually tell one continuing story from the past two years.”

Another one, HDNA – The Album: new solos and collabs

The formulas of the albums have similarities, but also differ from each other, says Hard Driver. “Both albums represent the core Hard Driver sound. Hard, but also party vibes at the same time. Although I think that HDNA was perhaps made a little more for the dancefloor than Chemistry. Perhaps this is because I started producing HDNA when the prospects were a bit better than they were during Chemistry, haha.” A well-known phenomenon among producers: because getting inspiration for new music without response from a massive dancefloor is like going to the Disneyland without being allowed to ride the rollercoasters.

“I do think that if you listen to both albums in succession, it fits perfectly together in terms of sound and vibe. This is the sound I stand for!” That sound is key to HDNA: the fourth Hard Driver album. “It turned out to be 10 bangers in total – 5 solos and 5 collabs. For this album I collaborated with Rebelion, Sound Rush, Sickmode, Villain and Atmozfears. I’m really super happy that these names are on my album, it’s a very varied list in terms of sound and style.”

From tracks with Wildstylez to Phuture Noize; if you put all Hard Driver’s collabs in a playlist, you’ll have more than 50(!) songs to listen to for hours. HDNA again has a impressive list of collaborations: “At the end of 2021, I approached almost all collabs. They were all very enthusiastic right away, so we immediately started sparring about ideas. Only the collab with Villain came about quite late, which was 2 weeks before the deadline. There was one track left on my album at that point, so I thought, why not just call it ‘One More Track’? So I messaged Villain and he immediately had all kinds of ideas about the record, so that collaboration went very smoothly as well.” 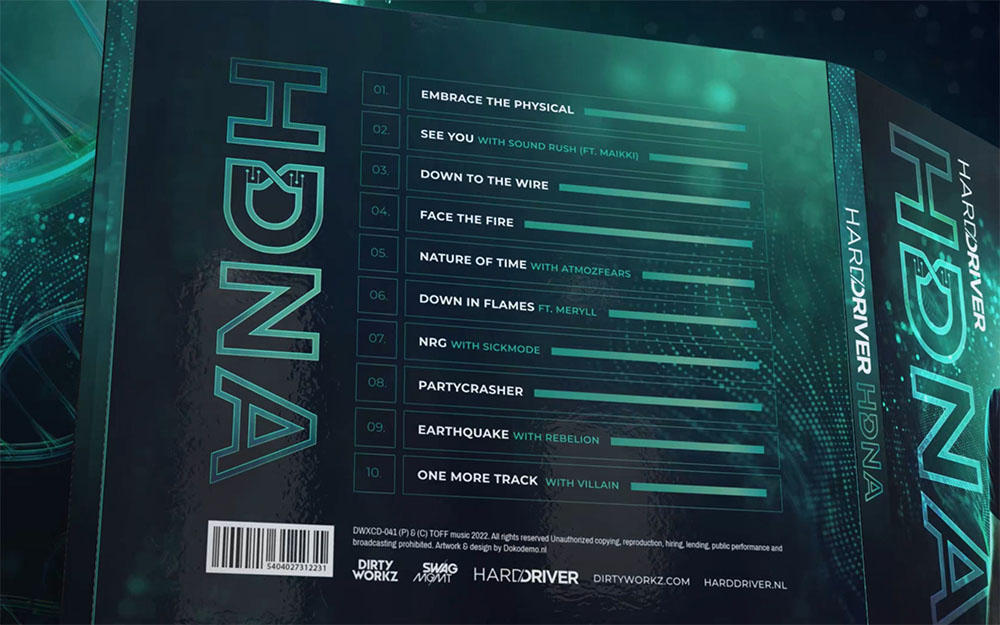 Speaking of smooth sailing: Hard Driver works overtime in the studio and (besides producing music) also does a lot of show audio and mastering. Which is all quite a lot, but the goal has been clear from the start. “In 2020 I came up with the plan together with my team to release two solo albums in two years. So I knew what challenge I was facing, but I was really looking forward to it. If I have a goal in mind, then I go all in to make it work. Especially that part of the fun in producing ensures that I am very productive and that I am in the studio every day. Although I must confess that after the release of this album I will take some time off for a while, haha!”

Hard Driver: “After Defqon I have something special for everyone…”

The world is open again and the amount of bookings is increasing: it is a completely different perspective than two years ago. “I want to thank all the fans for the great support over the past years. This album is for you! It will be pure pleasure to play my new music at all events this summer. Last but not least, I have a very special surprise in store for everyone… More information about this will follow after Defqon, so I would say: keep your ears and eyes open!”

Hard Driver’s fourth album HDNA will be released on Friday June 10th on the Dirty Workz label. Stream the album or get it at home via the official channels.

Sub Zero Project is stepping it up once more with new album: “Renaissance of Rave”

After the successful chapters, Sub Zero Project is about to release a new album. Renaissance of Rave is full of exclusive records and collabs: “With a little…

Rebelion: “Our new album A.I. (Artificial Intoxication) is specially made for the dancefloor”

The guys from Rebelion are about to release their brand new album: A.I. (Artificial Intoxication). Just in time for the festival season, where they will take over…

‘Ultra Miami was definitely ready for some Hardstyle’

Welcome to the world of hardstyle, Ultra! After more than 20 years, Ultra Music Festival not only welcomed hard dance artists to the line-up for the very…