How you represent yourself to the rest of the world is one of the biggest aspects for a dj these days. Because what is a dj without some good looking pictures? Time and time again, at every performance and release, the artists have to strike a pose and smile. Just like everybody else – dj’s are humans too after all – their outer appearances change a lot as the years go by. A new haircut, a wild beard or a growth spurt of six inches, you name it! It’s time to compare all these press pics. How did these 13 hardstyle dj’s look like back in the day?

We kick off with Mister Unleashed! Digital Punk set yardsticks from 2010 – when there was no growth of hair on his chin. In a couple of years, Digital Punk developed himself from upcoming dj with a baby face to one of the biggest artists in the raw scene, including a supersonic mohawk. 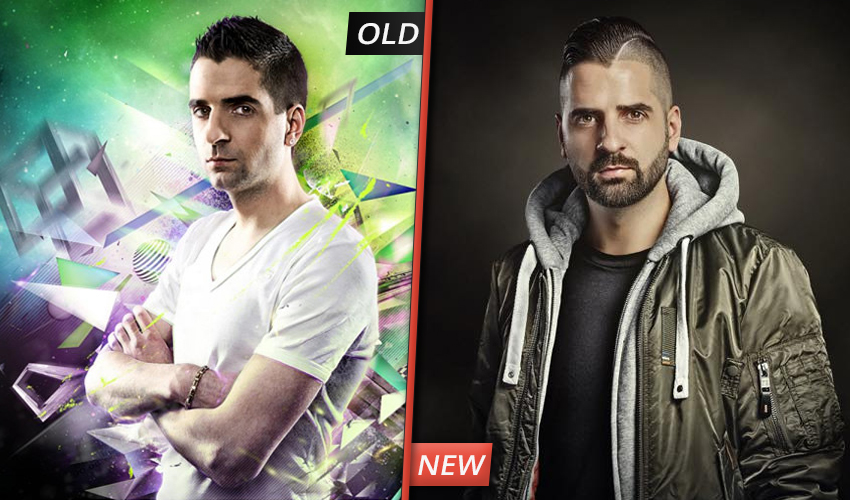 Master of catchy melodies Atmozfears wasn’t on his own in the very beginning. In fact, the group Atmozfears was formed by three guys. Two of the members decided to leave the formation and then Tim van de Stadt was on his own. Throughout the years he got rid of his Super Saiyan haircut from Dragon Ball Z and turned into a leaner version of Skrillex, including a hipster pair of glasses. Looking good, Tim! 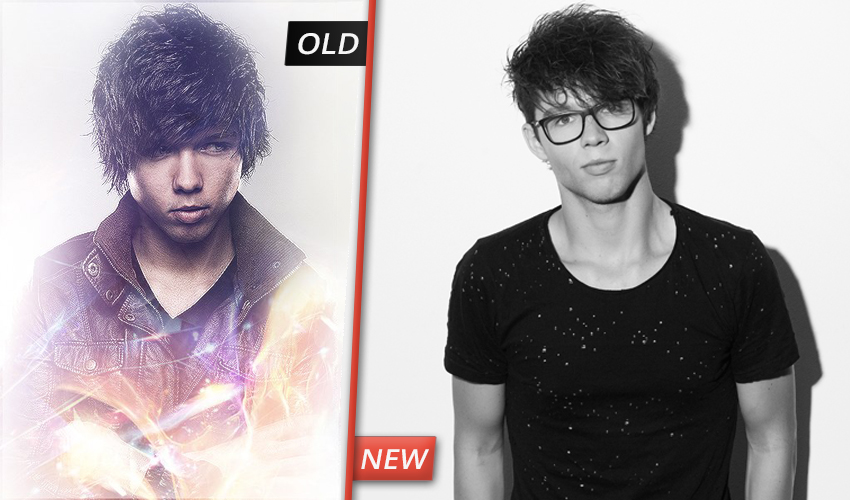 We can’t just overlook Heady for this article. Headhunterz made a spectacular comeback this year to the music where he’s made a hugh impact on already: hardstyle. Meanwhile, Headhunterz didn’t stand still and began to collect some ink – look at his right arm! – and some hair on top of his head. We also believe that he’s auditioning as model for the cover of Men’s Health. With his shredded lifestyle there’s no more (at least a little less) room for Bacardi and more room for weightlifting. Shredhunterz are back! 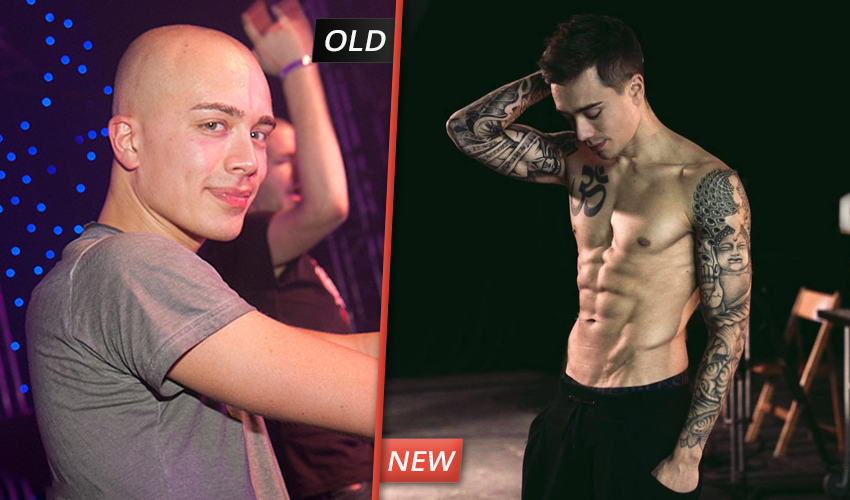 Niels and Pepijn developed themselves as icons in the euphoric raw in a short period of time. Never would they have ever thought that they would come so far, back in time when the picture down below was taken. With fancy shirts, probably bought at Primark, and a hairdo that shines like a disco ball, this duo was about to climb their way to the top. From young rascals to true leaders of the Wolfpack. 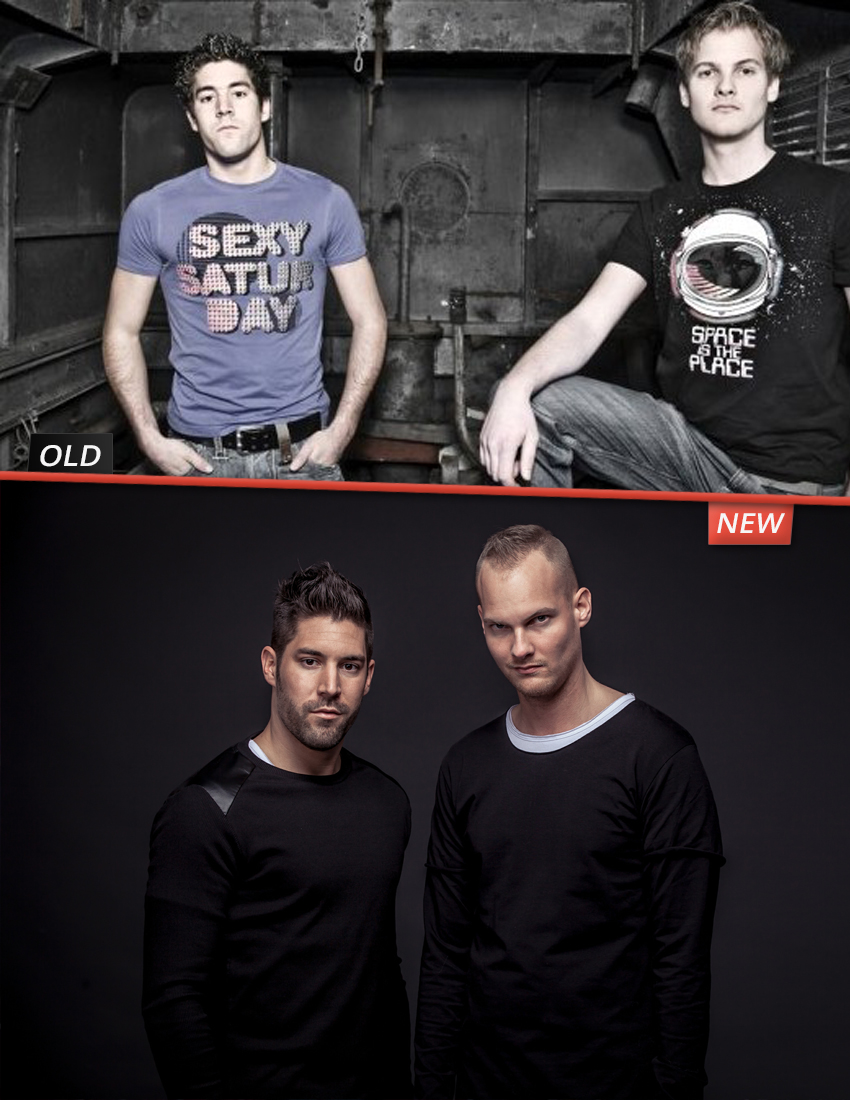 His track ‘Darkness is Calling’ got played for the very first time in 2011 at Hard Bass and only 6 years later his very own third show is already about to happen. Annihilate was just the beginning of an impressive career. After a lot of training and gaining, Radical Redemption’s outer appearance changed big time the last couple of years. Nowadays, you don’t fuck with The Radical!

With his own X-Qlusive, Thrillogy and a Beyond Reality hosting to his name, there are quite a few bookings where B-Front had to perform. Almost 10 years ago, in 2008 to be exact, he was already playing at Defqon.1! Nowadays Bob has lost some of his wild (red) oats and now he’s… a little less red. 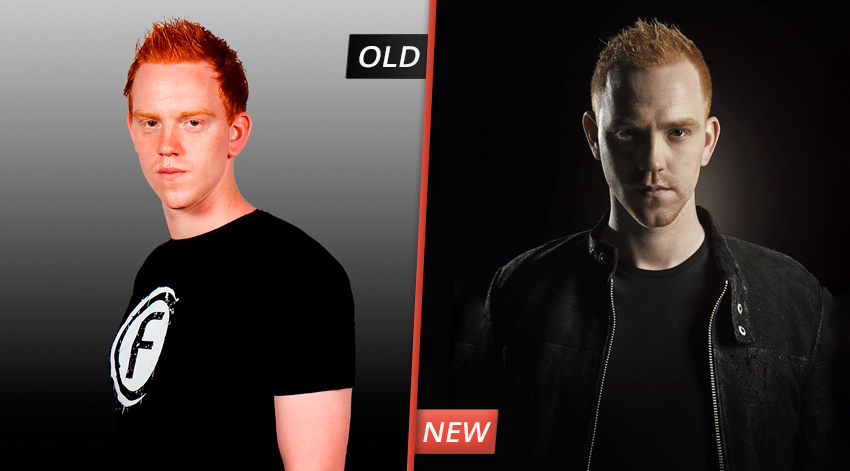 The Haunter of the Dark is considered to be one of the founders of the raw. Also Adaro changed his style and his looks have changed over the years. I mean look at the guy, John Travolta has got nothing on the hairdo of Thijs! 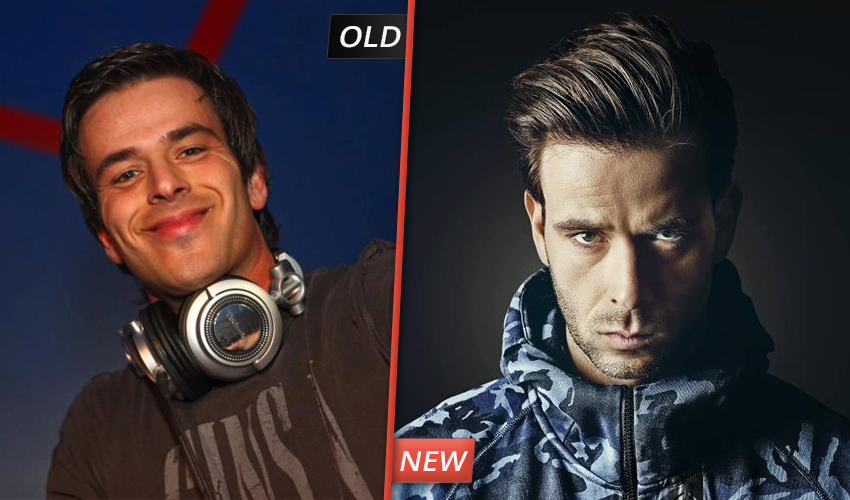 This guy from Australia moved to Europe a while ago and we think that the wind of the North Sea has done good to his hair growth. The bold, shiny head from the glamour photo – which could be featured in a mail order catalog – is now gone and made room for a nice, curly squirrel on his head. Audiofreq is now finally ready to fulfill his super hero role as Batman… 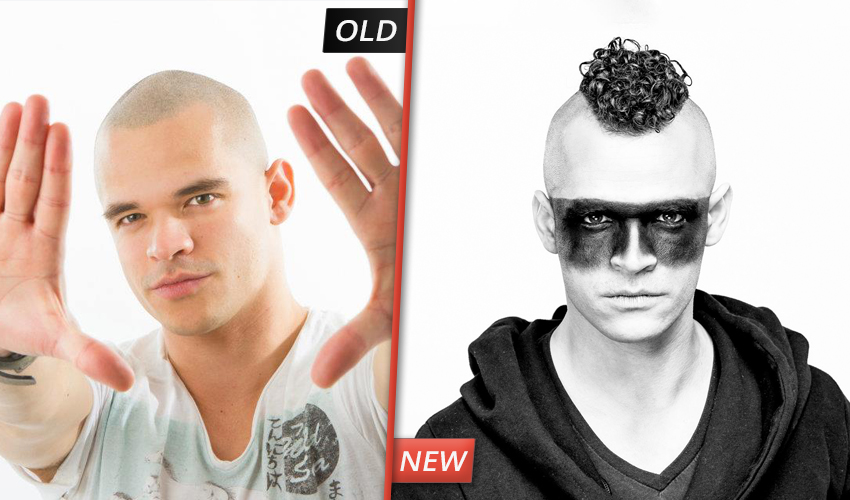 We continue with Wildstylez, one of the dj’s who has secured his spot in the top of hardstyle since the beginning. We would like to have your attention for his old press photo; pure gold if you ask us! Like he just came out of a G.I. Joe action figure package. Add his measured facial hair and you got the Wildstylez as we know today. 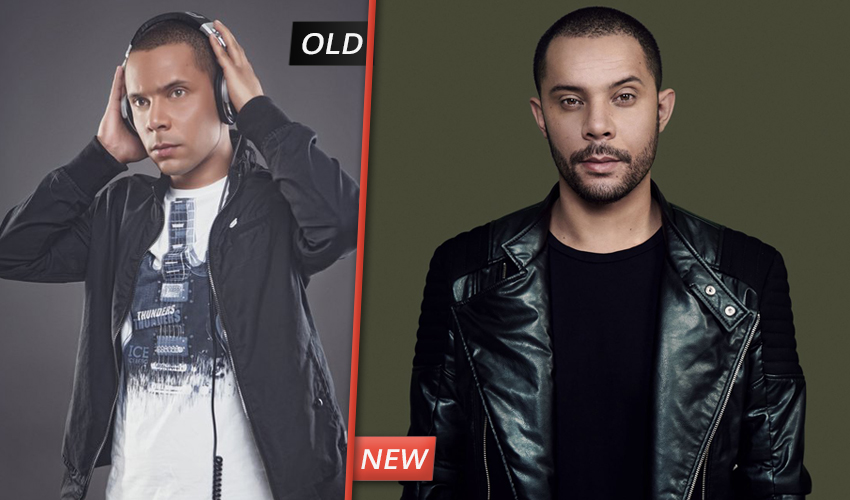 No, these are not gangsters, it’s D-Block & S-te-Fan! The duo, that just released their brand new album Antidote this week, wasn’t posing for a fancy dress party back in 2009. But we are not quite sure wherefore it actually was. The photo is just unlike others and couldn’t be missed in this piece. Gangsters for life!

How bald can an artist be? Frontliner has proved it every week behind the turn tables with his shiny head. After all the years as an artists, his outer appearance has developed quite a bit, as we can clearly see when we take a look at the curly curls and the same pair of glasses as Atmozfears earlier. The Melodyman is shining! 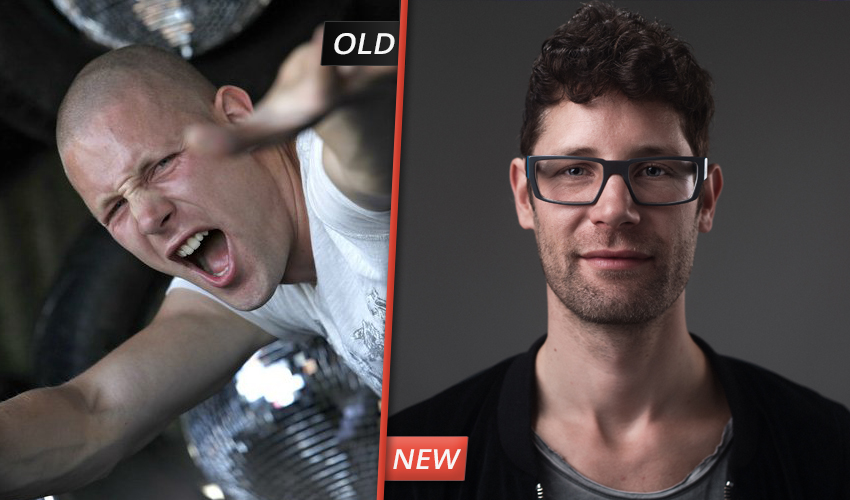 As leader of The Gang, Coone is a real mafioso. It must be very bright out there in sunny Belgium, a big pair of sunglasses would come quite handy. The boss of Dirty Workz still salutes to his gang members in present time. El Capone, eat your heart out! 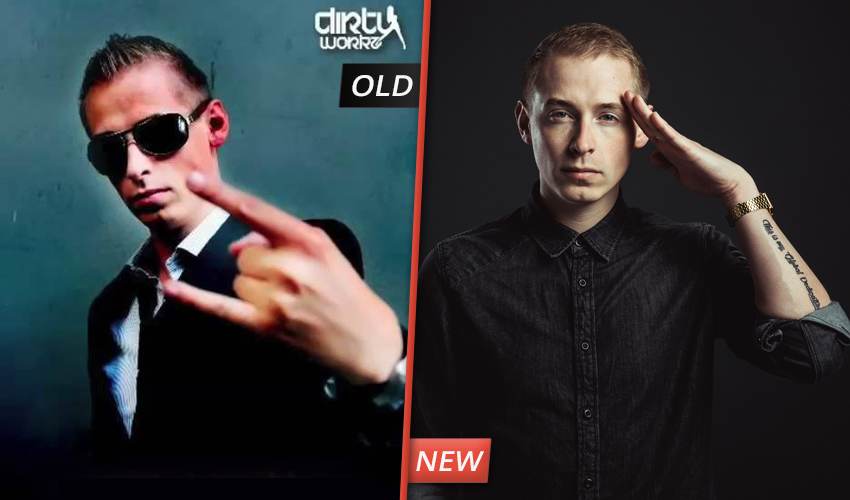 Well, we don’t know what to say about this one, expect for the fact that the gentlemen of Gunz for Hire have changed a lot the past few years… Do you see the differences? 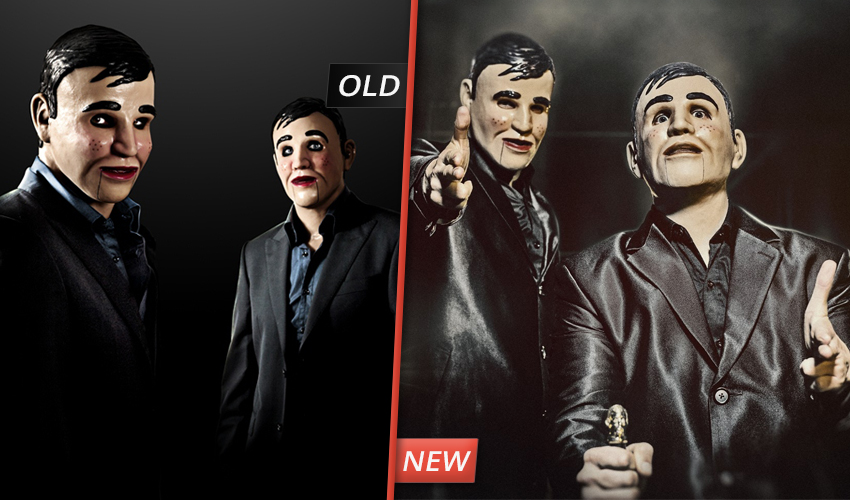 Mental health problems in the harder styles scene: “You have everything people wish for, but you still feel like this”

The list of people with mental health problems in the entertainment industry, especially musically, seems endless. But it’s not only linked to the world’s famous superstars, like…

On 23rd November, Qlimax will be held in the GelreDome for the 23rd time. Every year, around tens of thousands of hardstyle lovers unite in the famous…

This is what we know about Qlimax 2019 so far

Every year, Qlimax is a true highlight for lovers of the harder styles: in the Gelredome the biggest artists, the best of stage design and an impressive…