10 reasons why you definitely don’t want to miss REBELLiON: “Our biggest edition ever!”

In a couple of weeks, the sixth edition of REBELLiON will take place. With a new & bigger location, an immense raw line-up and the best of showcases, this edition truly promises grand things. That’s why we have easily found 10 reasons why you definitely don’t want to miss REBELLiON 2019 – Call of the Dome.

ALSO READ: REBELLiON reveals line-up for biggest edition ever: ‘Call of the Dome’

1. Over 25 heroes of RAW behind the decks

For the new edition of REBELLiON, more than enough raw hardstyle heroes will take their places in the DJ booth: “Only the prime deviants of raw have been selected for our largest uprising ever!” From versus sets such as Regain vs. Malice and Bloodlust vs. Artifact, to big names like Warface, D-Sturb and Delete: REBELLiON – Call of the Dome will be the place to be for all raw hardstyle soldiers.

Over the last couple of years REBELLiON took place in the Sporthal Beekdal, but now the event is moving to a larger location especially for ‘Call of the Dome’. Even though we know the base of the event will stay in the city of Haaren, the actual location still remains a secret for all visitors of this Dome…

3. For the very first time you’ll get to enjoy two areas

For the first time in the history of REBELLiON, the event will house no less than 2 areas. As always the mainstage REBELLiON will have a place for the biggest artists within the raw hardstyle genre, but especially for this edition the organisation will introduce a second area: REBORN RAW. Here, you’ll find the biggest artists on the rise behind the decks: “The ones to someday trash every major stage known to man!”

4. You’ll be feeling nice and fresh the next day

You can luckily start the day after REBELLiON without too much of a hangover, since this party is a day event! This means you won’t have to wait the whole Saturday before you can all make your way to Haaren, and you’ll be able to perform your very first kickrolls with your friends at 14:00. As icing on the raw cake, REBELLiON will go on until 01:00, so you’ll be able to make it to bed nice and early. Or not…

During REBELLiON there will be more than enough epic live-acts waiting for you. Among others the heroes Act of Rage & MYST will both perform LIVE at the mainstage, but also none other than Killshot will perform his live-act Beastmode and will make sure hard kicks will be blasted through the new location. You definitely don’t want to miss these artists!

If there’s one thing important for a raw hardstyle event, it’s having a good sound system. The organisation of REBELLiON knows this as well, and has made sure you’ll be able to enjoy clear sound coming out of the speakers. REBELLiON also knows travelling to a party shouldn’t be hard, so the organisation has worked with many travel partners who can drive you from door to door. Furthermore there are plenty of shuttle busses ready at the ‘s Hertogenbosch station. 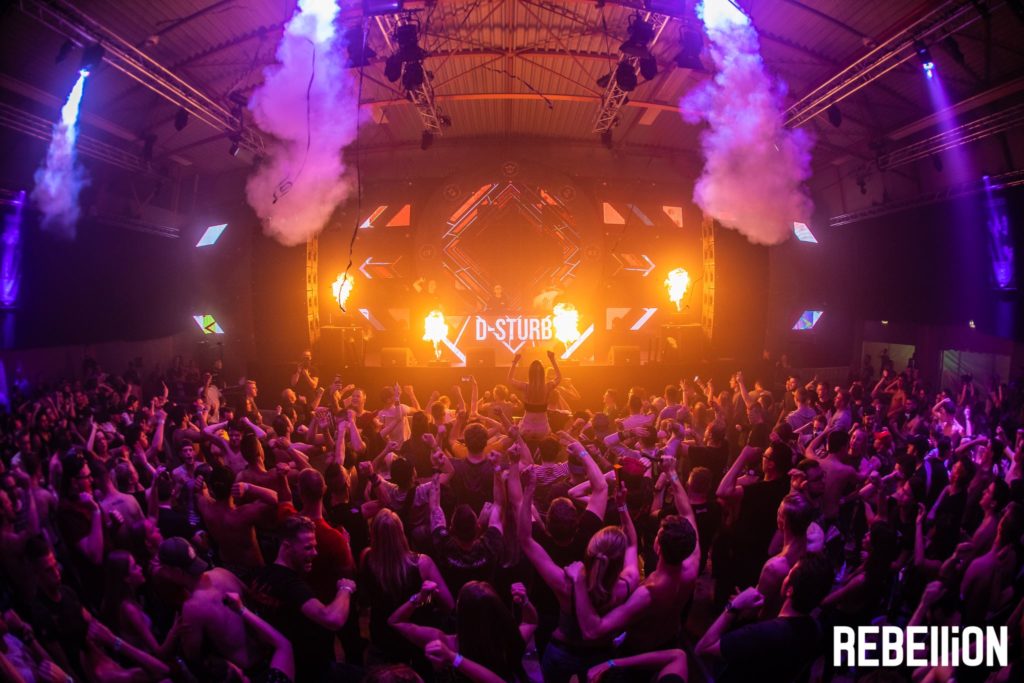 In addition to the good line-up and location, the organisation has also made sure their show will be next level. So, for REBELLiON you should get ready for a true show spectacle, in which special effects will be flying right, left and center. Furthermore, the stage design has been greatly updated according to the organisation, so you’ll definitely have something to feast your eye on as well.

Especially for REBELLiON there’s a very unique battle on its way: none other than Ncrypta, Luminite & Thyron will face each other behind the decks. Of course this is a 5 star combination for raw hardstyle lovers, and definitely a good reason why you don’t want to miss the new upcoming edition of REBELLiON.

9. RVAGE with his New Dimension Showcase

As if the names mentioned above aren’t enough, none other than RVAGE will also be present on the 23rd of November. This DJ recently released his mini-album New Dimension, which he desribes as being “experimental, mysterious & energetic”. Fans of RVAGE can definitely get excited for REBELLiON, since he will perform LIVE with his brand new album showcase.

Even though this edition will be known as ‘the biggest REBELLiON ever’, you don’t have to pay too much for a ticket. Including service costs the total price will come in at 40 euros, which means REBELLiON truly gives you value for your money!

REBELLiON 2019 – Call of the Dome will take place on the 23rd of November from 14:00 until 01:00 at a still unknown location in Haaren. Tickets are now available via the official website of the event, on which you’ll also find more information.

REBELLiON is getting ready for a new showdown in November

REBELLiON is looking with confidence to the final months of this year, where it will reopen the gates of The Dome. The last edition of the successful…

The word was finally out there: after a few years and over 100 performances, the brand new mini album New Dimension will represent the next step in…

REBELLiON reveals line-up for biggest edition ever: ‘Call of the Dome’

The word is out: REBELLiON has just released its line-up for the upcoming edition. Because of the move to a new, bigger location, there will be two…